Rembrandt's first masterpiece exhibited for the first time in the U.S. at The Morgan

Rembrandt's first masterpiece exhibited for the first time in the U.S. at The Morgan NEW YORK, NY.- Completed when he was just twenty-three years old, Rembrandt’s Judas Returning the Thirty Pieces of Silver has long been recognized as the artist’s first mature work, his first masterpiece. The painting demonstrates many of the characteristics that would come to define Rembrandt’s style: dramatic lighting, a rhythmic harmony of composition, and his exceptional ability to convey the emotional drama of a scene. Long held in a British private collection, the painting is being shown in the United States for the first time at the Morgan beginning June 3 in a new exhibition titled Rembrandt’s First Masterpiece.

Adding to the importance of the presentation, Judas Returning the Thirty Pieces of Silver is one of very few Rembrandt works for which several preparatory drawings survive. The exhibition reunites the painting and the drawings for the first time since their creation, offering visitors an unprecedented opportunity to take a glimpse over Rembrandt’s shoulder as he worked on this composition.

Among the first to recognize the greatness of Rembrandt’s Judas Returning the Thirty Pieces of Silver was the famous Dutch diplomat, poet, musician, and art connoisseur Constantijn Huygens. The manuscript of Huygens’s autobiography which contains his lyrical account of the painting has been lent by the Royal Library in The Hague and included in the exhibition.

Also on view are a number of early self-portraits that show the young Rembrandt at the time he painted the panel, and some two dozen etchings and drawings of scenes from the life of Christ that illustrate the development of the artist’s narrative style. Many of the items on view are from the Morgan’s own collection of Rembrandt prints and drawings, and the exhibition also features loans from the Metropolitan Museum of Art; the British Museum, London; the Rijksmuseum, Amsterdam; and the Kupferstichkabinett, Berlin.

“Judas Returning the Thirty Pieces of Silver is an extraordinary painting that shows Rembrandt at an early age tackling one of the most powerful episodes in the Bible,” said Colin B. Bailey, director of the Morgan Library & Museum. “He, like many of his contemporaries, aspired to be a painter of history and looked for inspiration to well-known religious subjects, as well as mythology and Greek and Roman history. The exhibition presents visitors with the opportunity to discover a rarely seen masterpiece and to explore the creative process by which the young artist gave visual form to the dramatic encounter.”

THE EXHIBITION
I. Judas Returning the Thirty Pieces of Silver, 1629
Although the Judas scene is one of the more memorably emotional episodes from the narrative of Christ’s life, it was a relatively rare subject for painters when Rembrandt undertook it in 1629. The theatrical staging, bold lighting, and a fascination with exotic costumes seen in the painting are all characteristic of his work. Above all, however, Rembrandt concentrated on the depiction of human emotion, and the central focus of the scene remains the contrast between the haughty priests of the temple and the kneeling Judas, writhing in agony in the foreground.

The artist labored over the preparatory drawings and the composition. Five studies for the painting document Rembrandt’s pattern of invention as he devised the scene. Close study of the painting surface and x-ray photographs also reveal that he continued to make changes as he worked. 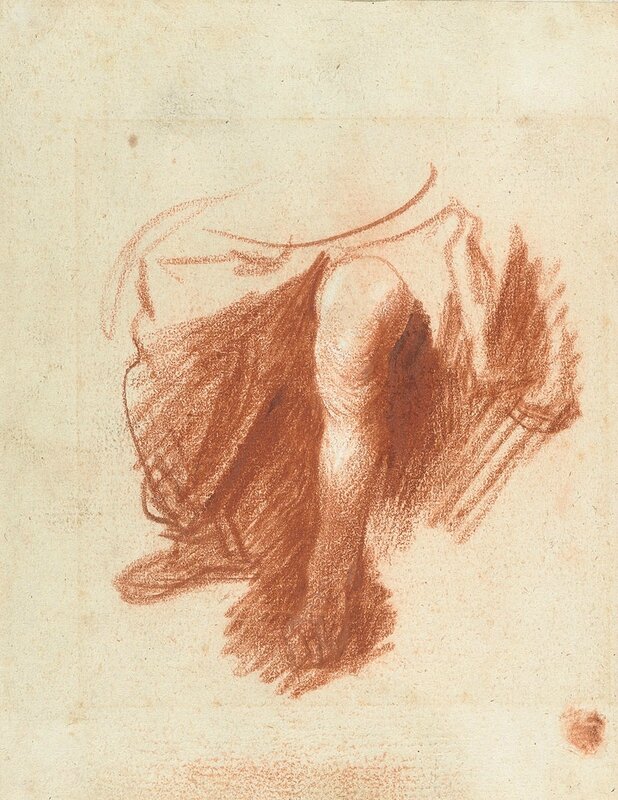 I. Self-Portraits
During his long career, Rembrandt painted, drew, and etched more self-portraits than almost any other artist. In the years around the time he painted Judas Returning the Thirty Pieces of Silver, the young artist used his face to reproduce different expressions and emotions. This intense study of his own features proved an invaluable source for his work. As Rembrandt’s student Samuel van Hoogstraten would go on to advise artists in 1678: “[B]enefit can be gained from the depiction of your own passions, especially in front of a mirror, where you are simultaneously the creator and the spectator.” Rembrandt also made self-portraits as a means of presenting himself to the outside world. This is especially the case with his prints, which he could distribute in greater numbers than paintings or drawings. The ambitious, up-and-coming artist was conscious of his image, as the group of etchings from this period shows.

In a self-portrait dated ca. 1628-9, Rembrandt has a neutral, if slightly stern, expression. The artist executed the face, hair, and the contours of the clothing with pen and ink. With a brush he then generously applied gray wash to define the clothing and add volume to the already thick curls. This combination of brown ink and gray wash is unusual for Rembrandt, but also appears in another self-portrait, and in one of the Judas drawings. Self-Portrait in a Cap, Wide-Eyed and Open-Mouthed features the artist with his head towards us in a state of utter bewilderment. One of the most iconic of all his self-portrait prints, this work ingeniously demonstrates the impression of sudden surprise by depicting his face close-up, by cutting the image at the top, and by placing us at a slightly lower angle, looking up. The poignant highlights in his eyes increase the immediacy of the work. III. Rembrandt and the Gospel
The life of Christ remained a subject of perpetual fascination to Rembrandt, and from his earliest etching to his later works, the artist returned to episodes from the gospel narratives. In some cases, he devised wholly new versions of subjects undertaken years earlier; in other cases, he would work and rework a subject on a single copper plate, producing the radically revised etching states for which he is famous. Perhaps unexpectedly, however, Rembrandt did not approach the episode of Judas returning the silver again.

A selection of Rembrandt’s gospel scenes is included in the exhibition, allowing a look at the ways in which Rembrandt’s narrative style evolved over the course of his career. The Circumcision on view in the exhibition, is considered to be the artist’s first etching, made while he was working in Leiden alongside Jan Lievens, who had already experimented with printmaking. Its awkward execution, unconvincing spatial setting, and the figures’ lack of volume suggest an artist struggling to master a new technique. He would soon adopt a freer, more drawing-like style for his etchings as he developed a more individualized manner. 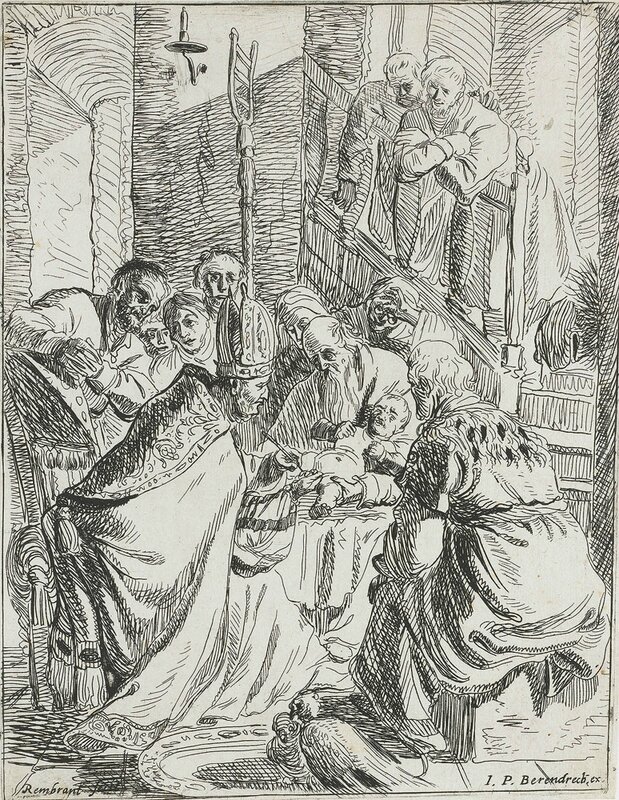 Surprisingly, Rembrandt never created a painting or print of the Last Supper. However, a series of drawings on view in the exhibition shows the artist’s engagement with Leonardo da Vinci’s famous painting of the subject. Rembrandt never traveled to Italy or saw the original, but instead studied several prints after Leonardo’s work. V. Rembrandt’s Repertoire
The painting’s Judas figure has been singled out for special praise by writers, and it would initially seem that the pose was created in response specifically to the gospel text describing Judas’s despair. Yet, Rembrandt adapted the same figure for very different means in other works.

In his earliest depiction in print of St. Jerome, Rembrandt employed a variant of the kneeling, praying figure. The humble, devotional pose adapted well to a characterization of the learned hermit holy man. Similarly, Rembrandt reused the early adaptations of the Judas figure in his etching of Saints Peter and Paul healing the Cripple. In all these compositions, however, it was the expressive potential of the figures that was the key. One of Rembrandt’s pupils, Jan van Vliet, would later remove the kneeling man from all narrative context, and produce the print commonly known as A Man Grieving, a study of pure human emotion.

V. Praise by Constantijn Huygens
Around 1629, the remarkable Dutch diplomat and art connoisseur Constantijn Huygens saw the Judas Returning the Thirty Pieces of Silver in Rembrandt’s workshop. He was so impressed that he wrote a lyrical account of this painting in his autobiography: “The gesture of that one despairing Judas (not to mention all the other impressive figures in the painting), that one maddened Judas, screaming, begging for forgiveness, but devoid of hope, all traces of hope erased from his face; his gaze wild, his hair torn out by the roots, his garments rent, his arms contorted, his hands clenched until they bleed; a blind impulse has brought him to his knees, his whole body writhing in pitiful hideousness. […] Even as I write these words I am struck with amazement. All honor to thee, Rembrandt!” The Morgan is delighted that the manuscript of Huygens’s autobiography will be lent to the exhibition by the Royal Library in The Hague, where it will be displayed near the painting it so arrestingly describes. 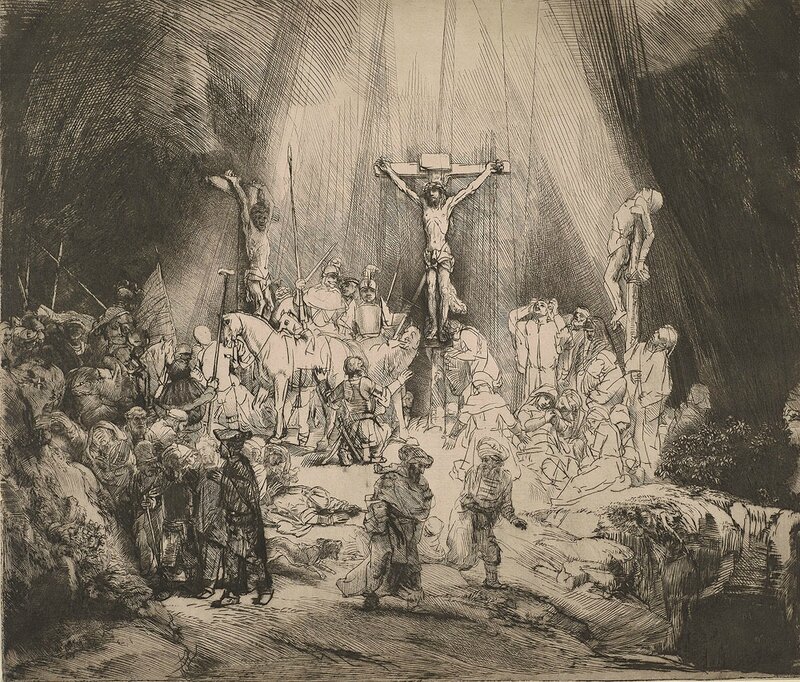 Commentaires sur Rembrandt's first masterpiece exhibited for the first time in the U.S. at The Morgan