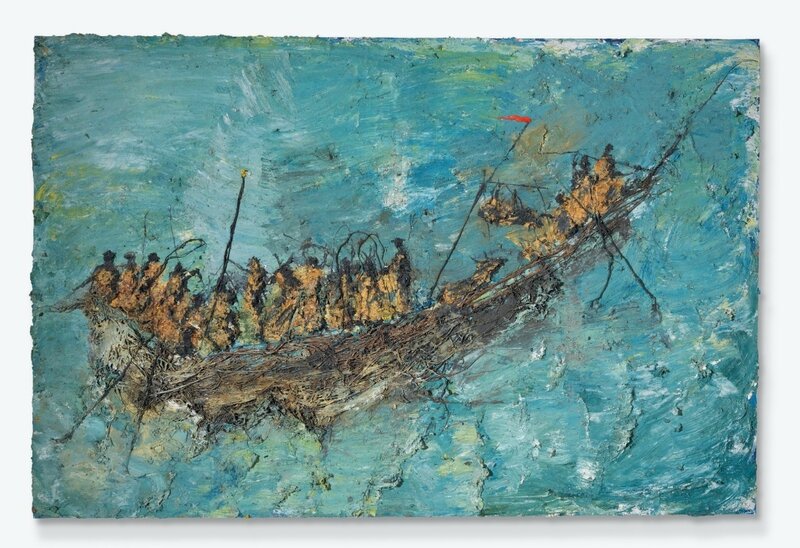 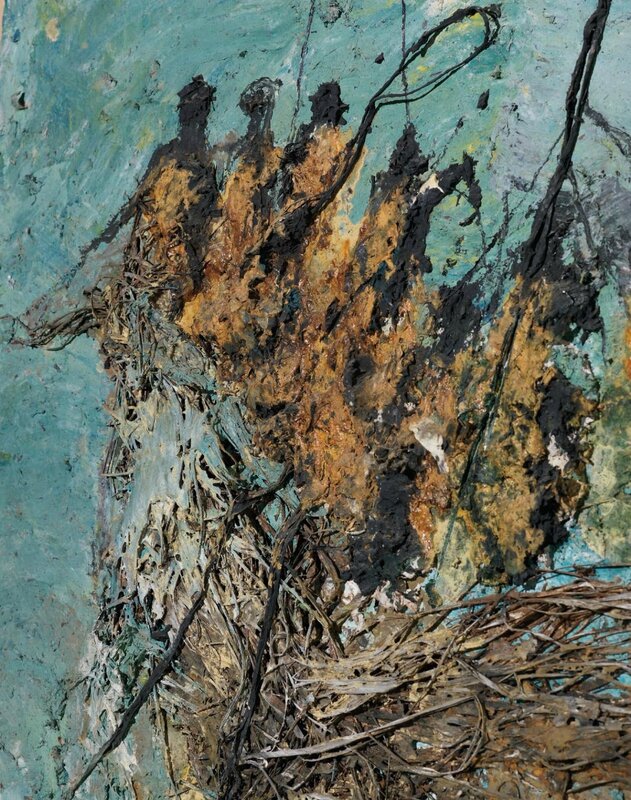 Provenance: Galerie Bruno Bischofberger, Zurich.
Acquired from the above by the present owner.

Notes: ‘[Africa represents] a kind of overall cleansing. The first reaction I always have when I arrive in Mali is to realise the uselessness of things. One paints out of pure necessity there. In Paris or here (in Mallorca), by always painting in the same studio, you come to forget the essence of the affair. In Mali I get back in touch with the essence of the act of painting’ —M. BARCELÓ

‘Wherever he may be, Miquel Barceló surely seems to be embarked on a voyage without an end. Behind him he leaves a wake of fragmented visions, sparkles that gleam in the night. This Southerner from the Mediterranean shores, with a mind full of dreams like any islander, mixes the present and the past, sails though the sea of painting and discovers worlds’—F. C. SERALLER

‘Barceló confirms what he had intuited from the beginning. Everything is at once old and new again. Africa is everywhere. Africa is the grandeur and drama of natural forces, the intensity of experience, the direct confrontation with the basic dimensions of life and death’—P. SUBIRÓS 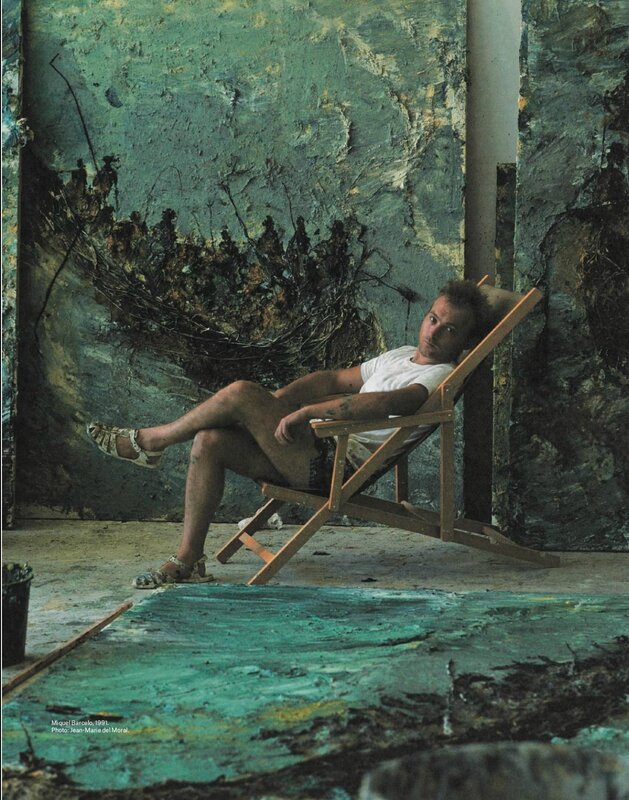 Having first visited West Africa in 1988 in search of new artistic direction, in the early months of 1991 Miquel Barceló made one of his most important creative voyages: he travelled 1500km along the Niger River with his friend and fellow artist Amahigueré Dolo in a pirogue, the traditional dugout canoes of Mali. On his return to Mallorca, he created a series of huge, spectacular mixed-media compositions based on the life of the river. Dating from the same period as iconic bullring paintings such as Faena de muleta (1990), these works employed rich, expressive impasto and organic matter to move beyond representation, seeking not merely to evoke but to materially incarnate the world he experienced. Pinassi is the vertiginous masterwork of the series, conjuring all the drama and grandeur of the African environment that informed this crucial time in Barceló’s oeuvre. Barceló created only six large-scale works on the subject, of which the present work is one of the two largest. Pinassi’s impressive magnitude and masterful execution bring forth the river with visceral force. Displaying Barceló’s command of surface, texture and composition, the heaving blue Niger encompasses the entirety of the canvas, looking ready to overwhelm the clustered boatmen. Brought to life with spidery kinetic energy, the boat and its passengers are both earthy and ethereal, the use of dried grass and roots heightening their fragility against the churning expanse of water. The Art Informel and Art Brut influences of Barceló’s early career encounter the Baroque strains of Tintoretto or Velázquez, uniting the organic and the oneiric in a dreamlike tableau. The intrepid vessel can also be read as a metaphor for Barceló’s own nomadic painterly journey, which has taken him from Mallorca to Mali and back in search of the elemental forces of art and life. Acutely responsive to his surroundings, in Pinassi the artist displays all the rugged, sunbaked material intensity that has made him one of the most celebrated painters of our time. To stand in front of Pinassi is sublime, immersive experience. The vast scale absorbs us, the world around diminished by the lush vigour of the river; Barceló’s impasto brings the water into three dimensions, as though he has dragged the very essence of the Niger into his painting. Much as in the dizzying centrifugal energy of his bullfighting works, paint becomes pure momentum. Flecks of wake appear to bustle and beat against the side of the boat, while the river’s undulations are made liquid through deft manipulation of his paint’s tone and density. Floating delicately across this raging surface, the botanical slenderness of the boat – Pinassi means ‘pine needles’ in Catalan as well as ‘boat made of pine’ – is more than a stylistic exercise: the period during which Barceló made his trip along the Niger was one of immense political upheaval in Mali. During the first three months of the year, there was an increase in protests against the regime of Moussa Traoré, which were increasingly met with violence. After a few months, Traoré was deposed, ending a long period in the country’s history (he had come to power in 1968). The boat in this painting, ferrying its passengers, thus speaks also of the precarious passage of fears, hopes and fortunes in a world of turmoil. 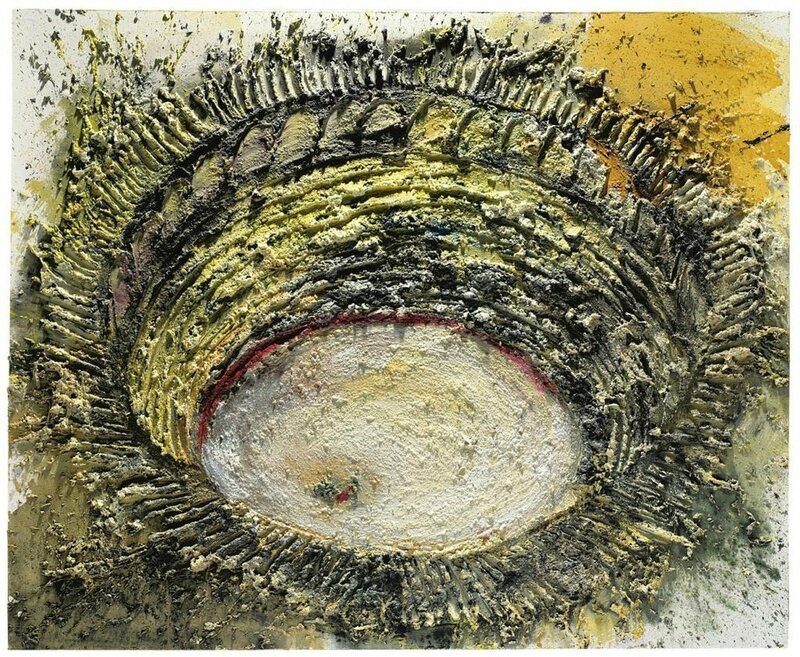 Barceló wrote in 1988 that ‘Gao is the poorest village in one of the poorest countries in the world. The weather is so hard that one must concentrate one’s efforts on one thing only. Endurance. Resistance. Distance. There is so much dust, so many flies, big as pigeons, mosquitoes and all the illnesses in the world, and so much death, that if I pick up a paint brush it must be justifiable, modest’ (M. Barceló, quoted in Miquel Barceló: 1987-1997, exh. cat. Museu d’Art Contemporani de Barcelona, 1998, p. 86). Indeed, in his time in Africa Barceló removed himself from the self-referential world of art and art criticism, instead immersing himself in an environment in which daily existence itself was a task to be carefully negotiated. The themes and tropes of European art fall away, irrelevant in the face of a raw world such as this. Pinassi is not a knowing reprisal of a classical theme, no reference to Delacroix’s Christ on the Sea of Galilee or Géricault’s Raft of the Medusa; this is a painting of a specific moment in the River Niger’s history, elevated to the timeless and mythic through Barceló’s uniquely sensitive vision.