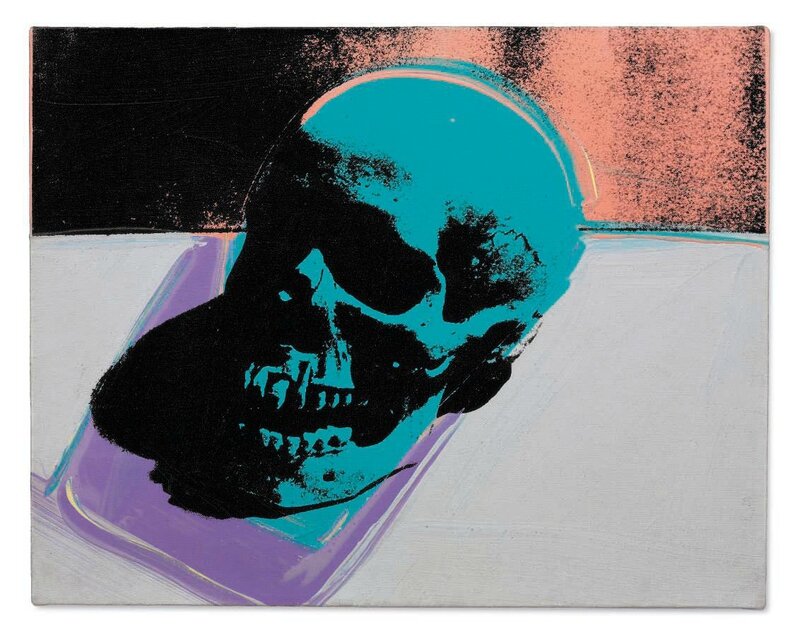 Notes: ‘Death can really make you look like a star’ —A. WARHOL

‘The more you look at the same exact thing, the more the meaning goes away and the better and emptier you feel’ —A. WARHOL A memento mori for the Pop generation, Andy Warhol’s Skull stems from the important series of skull paintings that the artist began in 1976. Executed in vivid turquoise upon a cold grey foreground, the skull casts a purple shadow and is offset by the background’s grainy orange glow; coal-black shadows transform its hollows into gaping voids, creating a sumptuous vision of death like a film noir still made technicolour. Based on a set of black and white photographs taken by Warhol’s studio assistant Ronnie Cutrone, the skulls are situated at the dawn of the artist’s mature practice. Recapitulating the mortal themes that had driven his early fascination with violence and celebrity, the skulls forged a new trajectory within Warhol’s oeuvre. Their ubiquity stood in sharp contrast to the flood of high-profile portrait commissions that Warhol received during the 1970s. Though his fame had reached fever pitch, Warhol was unable to shake the memory of his attempted assassination eight years earlier. Death preyed increasingly upon his mind, and the skulls were the first in a long line of macabre subjects that occupied Warhol during his latter years. Although its potent symbolism conjures Shakespearean tragedy and the vanitas still-life tradition, Warhol’s skull is articulated with the deliberately banal opacity of his Campbell’s soup cans and Coca-Cola bottles, representing a kind of universal portrait: a reminder of the corporeal transience to which we are all fated. Ultimately, it prefigures the artist’s final series of self-portraits, in which Warhol’s skull-like visage becomes an ethereal, disembodied vision of his own ephemeral condition. Standing among the artist’s most enigmatic motifs, works from the Skull series are housed in institutions including Tate, London, the San Francisco Museum of Modern Art and the Metropolitan Museum of Art, New York.

According to Cutrone, Warhol had purchased the original skull from an antiques shop in Paris. In the set of photographs that became the source images for the series, Cutrone had placed it on a trestle table in front of a blank studio wall, on top of a piece of plywood covered in white paper. Under Warhol’s instruction, he had taken a number of photographs under different light conditions in order to create varying lengths of shadow. Warhol was fascinated by the different shapes created in the interplay of light and shade, and sought to replicate this effect in his silkscreens. In doing so, the skulls are reduced to an almost abstract geometry that undermines their traditional association with Old Master painting and nature morte composition. As the curator Arthur K. Wheelock has written, ‘Dutch still-life painters placed realistically rendered skulls, with jawbones and teeth missing, in the midst of luxurious displays of expensive silver and luscious fruit to warn viewers about the transience of the sensual world. Warhol, however, presents an even starker image of the inevitability and mystery of death … there is no sensual world to enjoy, only a skull, complete with jawbone, who laughingly confronts us’ (A. K. Wheelock Jr., quoted in Andy Warhol: 365 Takes, New York 2004, p. 312). Filtered through the mechanical apparatus of the silkscreen, Warhol’s skull is a distinctly anti-human apparition. However, in a characteristic twist, there is an undeniably painterly quality to the work’s surface: in the skull’s lilac shadow and halo-like outline, remnants of sweeping brushstrokes betray the trace of the artist’s hand, a transient marker of physical presence. Despite their flattened formal properties, the varied and often bright colours of the series introduce a unique expressive dimension to each of Warhol’s skulls, individuating them to an even greater extent than many of his portraits. Warhol’s art had long been concerned with death: indeed, it was through his depictions of car crashes, electric chairs, race riots and dead celebrities during the 1960s that he had first achieved international recognition. Ironising the intersection between mortality and glamour, Warhol famously quipped that ‘Death can really make you look like a star’ (A. Warhol, quoted in Andy Warhol. A Factory, exh. cat., Museo Guggenheim Bilbao, 2000, unpaged). However, it was after the attempt on his life by the radical feminist writer Valerie Solanas in 1968 that Warhol was truly forced to confront the fact of his own impermanence. Death was no longer simply a trope for ghoulish public fascination but an uncomfortably close reality, and with it came a profound sense of dislocation. ‘Before I was shot, I always thought that I was more half-there than all-there – I always suspected that I was watching TV instead of living life. People sometimes say that the way things happen in movies is unreal, but actually it’s the way things happen in life that’s unreal. The movies make emotions look so strong and real, whereas when things really do happen to you, it’s like watching television – you don’t feel anything. Right when I was being shot and ever since, I knew that I was watching television. The channels switch, but it’s all television’ (A. Warhol, The Philosophy of Andy Warhol (From A to B and Back Again), New York 1975, p. 91). Now that death was a theme in his life, it in fact disappeared from Warhol’s art for a period of some years. The skull paintings, in many ways, marked its re-emergence: a visual confrontation with death that would continue through to his Guns and Knives of the 1980s. Though Warhol’s portrait commissions had brought him a great deal of material success, his thoughts were increasingly drawn to the near-fatal events of 1968. As David Bourdon writes, ‘he was acutely aware of the happenstance nature of sudden death. In the years that followed his shooting, Warhol occasionally expressed the wish that he had died at that time, partly because he “could have gotten the whole thing over with”’ (D. Bourdon, Warhol, New York 1989, p. 357). Cutrone had commented that to paint a skull ‘is to paint the portrait of everybody in the world’ (R. Cutrone, quoted in H. Foster, ‘Death in America’, in A. Michelson (ed.), October Files: Andy Warhol, Cambridge, MA 2001, p. 79). Though Warhol’s skull paintings embody this dictum, they may also be understood as intimate reflections on the artist’s own deep-seated personal fears: beautiful, cathartic meditations on the fragile divide between life and death, of which he was all too keenly aware.