Notes: This outstanding chess piece epitomises the Gothic style in presenting an image of youthful nobility and confident authority. It is one of the most sculptural of medieval chess figures, carved completely in the round and with a strong sense of monumentality. In the assured gesture of the King's left hand casually pulling at his cloak strap, with his delicate short wavy hair and pointed shoes, it is a seminal portrait of a 14th century sovereign.

The King sits upright, his feet set firmly on the ground. The heavy folds of his cloak hang in a broad sweep across his lap. A belt draws in his robe defining his waist. His gloved left hand is raised to his chest and pulls forward the strap which holds his cloak around his shoulders. The King looks straight forward his fixed stare looking into the distance.  He is a young man, clean shaven, his hair cut short under his crown. Behind him a falcon or eagle (see discussion below) is perched on the back of the throne; the pendant bird is missing. The King would have held an attribute in his missing right hand, most probably an orb or sceptre. The King's youthful good looks and slight smile give a sense of well-being and serenity. The bird perched bolt upright is a telling symbol of nobility and courtly life.

Whether the bird represents an eagle or a falcon has been interpreted differently. In 1978 the bird was described as an eagle (see The Robert von Hirsch Collection. Works of Art, Sotheby Parke Bernet, London, 22 June 1978, vol. 2, p. 94). This certainly fits with an heraldic view of royalty, however, 50 years earlier the catalogue of the Sigmaringen collection described it as a falcon (Sprinz, op. cit. p. 8) and this became a key element in the proposition that the chess piece is a portrait of Frederick II Hohenstaufen. In an article in Rivista d'Arte in 1955 José Dörig proposed that our chess piece represents Frederick II Hohenstaufen. This idea originated from a visit to the stimulating environment of Robert von Hirsch's home in Engelgasse, Basel.  There Dörig would have seen the walrus ivory displayed on the same shelf as other masterpieces of medieval art, such as the enamel armillae, believed to have come from the coronation vestments of Emperor Frederick I Barbarossa, a Eucharistic Dove from the Hohenzollern collection and also from Sigmaringen the champlevé enamel reliquary with a massive rock crystal dome (See Sotheby Parke Bernet, op. cit. lots 222, 239 and 229 respectively).

Dörig took as his starting point Frederick II's well known association with falconry. The Emperor famously wrote a treatise on this subject, De Arte Venandi cum Avibus, so the representation of falcons on the throne is eminently appropriate. He expanded his argument on the grounds that the seated King actually looks like known representations of Frederick II in various manuscript sources. Dörig admits that the physiognomy of the King is not based on a direct portrayal of Frederick II, and as Williamson points out the chess piece dates to at least 50 years after the emperor's death, although Dörig dates it a little earlier, to the last quarter of the 13th century (Dörig, op.cit. p. 79). He further associates our King with two cruder chessmen, one in Berlin and and one in Ravenna (see below) which represent a King holding a falcon. To support his arguments he drew some conclusions that cannot be substantiated, such as the origin of the chess piece in southern Italy, which weaken the two salient points of his argument. Dörig notes that Georg Swarzenski had described the material as narwhal, which Williamson has observed is a mistake which contributed to an erroneous identification of the present figure as Frederick II.

The heart of Dörig's thesis has merit, but rather than hoping to conclude that the Hohenzollern-von Hirsch King is an specific portrait of Frederick II, the importance of this chess piece is that it is one of the key surviving Gothic sculptures which codify the image of sovereignty and kingship. This iconography of Frederick II Hohenstaufen presents an image of a young and self-confident ruler, handsome and benevolent. The gesture with his gloved left hand holding the his cloak strap is one used in a few early Gothic portraits of rulers, most famously in the Bamberg Rider from around 1230. So it is perhaps legitimate to say that this wonderful piece of miniature sculpture does represent the Frederick II Hohenstaufen ideal of kingship, even though it may not have been intended as a direct likeness.

With the exception of the famous Lewis chessmen and the Charlemagne chessmen (Bibliothèque Nationale, Paris), it is extremely rare to find surviving medieval chess pieces from the same set. It is significant therefore that the Hohenzollern-von Hirsch King can be connected with a pendant figure of a King and two Bishops.

The unquestionable connection between the V&A King (inv. 213-1867) and the former von Hirsch King make it certain that they are of the same date. Ivory samples were taken from the King in the V&A for radiocarbon dating in 2011 resulted in a date of 1077-1255 with a 95.4% degree of probability (Williamson and Davies, op.cit. p.722).

The V&A and Hohenzollern-von Hirsch Kings are so close in their overall appearance to make it almost certain that they are opposing Kings from the same 14th century chess set. But they are not identical.  They both wear the same heavy cloak, but the V&A King has more drapery around his middle covering his waist which is defined with a belt in our King. Both Kings hold their cloak straps with their gloved left hand, but the V&A King holds the strap with just his thumb from the back, whilst our King also folds two fingers over the the strap from the front.  The general physiognomy and crown is identical in both figures. Our King is unique with the addition of the falcon perched on the back of the throne and consequently the throne of the V&A King has a taller back. These crucial differences underline the fact that the figures are close enough to be made by the same artist but different enough to be used as opposing Kings in a royal game of chess.

As stated above, Williamson rejects the suggestion that the present King was made in southern Italy, as proposed by Dörig and points to several stylistic affinities with figures from the high altar of Cologne Cathedral from the early 14th century. Parallels for the Kings' short cut wavy hair and low crown can be found in sculptures from Cologne as well as in Strasbourg as cited by Williamson (op. cit., p. 723). The distinctive gesture of the King pulling his cloak strap forward with his left hand animates the seated figure with a casual but poised air of authority can be compared with two large gothic sculptures: the famous stone Bamberg Rider in the east choir of Bamberg Cathedral which may represent Constantine the Great or St Stephen of Hungary, and the polychrome walnut tomb effigy of the Count Palatine Henry II in the abbey church, Maria Laach, Germany. 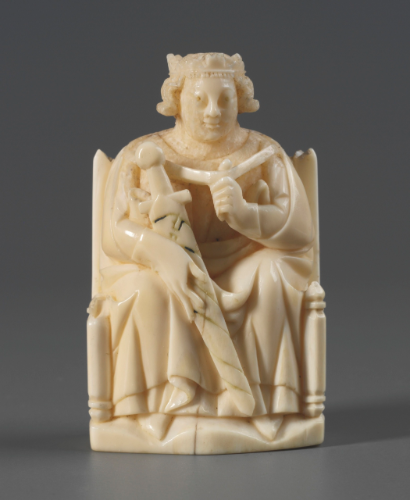 Further comparison can be made with two Bishops in the Skulpturensammlung und Museum für Byzantinische Kunst, Staatliche Museen zu Berlin which again are so stylistically close as to be by the same hand and from the same set. The Kings and Bishops sit on the same thrones, the ecclesiastical vestments of the Bishops are clearly defined, but they are carved with the same broad folds and sense of monumentality. The slightly oversized hands are the same, but, most strikingly, the physiognomy is identical. The Berlin Bishops were damaged during the 1940s. Outstanding examples of the equestrian King group are those in the V&A (A.22-1912) and British Museum (1859, 0516.1). These pieces are larger, over 10cm., but the numerous figures make the individual characterisation of the figures and faces more general.  More individuality is achieved in the second group of the King with attendants. One of the most spectacular is the enthroned King carried by four attendants in Berlin (inv. 710), which is admittedly very late Gothic as it may date into the 16th century. However, still none of the examples in this group have the strong observation of physiognomy and costume achieved in our chess piece and the others from the same set. Within this group of a King with attendants is an enthroned king holding a falcon, now sadly damaged (Skulpturensammlung und Museum für Byzantinische Kunst, Berlin,  Inv. 677, see also Museo Nazionale di Ravenna, inv. 1063, for a similar but lesser quality example, Gothic Ivories Project at The Courtauld Institute of Art, London, 26.5.2016). With the falcon iconography and the sword held in the right hand the Berlin and Ravenna Kings combine elements from both the V&A and our King and may be seen as further examples of Frederician symbolism in this genre.

Three fine enthroned Kings with an orb or flower attributes (Metropolitan Museum of Art, inv. 2000.153, The State Hermitage Museum, inv. F 3403, and Sotheby's, 4 December, 2013, lot 12; Gothic Ivories Project at The Courtauld Institute of Art, London, www.gothicivories.courtauld.ac.uk, 26.5.2016) share a strong sculptural focus on the regal character of the seated figure which are the best comparisons for the V&A and Hohenzollern-von Hirsch Kings.

The Provenance of the Hohenzollern - von Hirsch chess piece

This remarkable chess piece has been one of the defining objects in two legendary collections of medieval art. The King is illustrated amongst the major ivories in the Hohenzollern collection at Sigmaringen in the 1928 catalogue. At the time of going to press it is not known how it entered this Royal German collection, but its existence there is consistent with its origins in Germany in the early 14th century. Robert von Hirsch formed the core of his collection in the 1920s and 1930s so it is almost certain that he acquired the work around this time. Bernard Berenson is reported to have said to the Swiss art historian, Michael Stettler, that he had known only three collectors who really knew about the works of art that they collected and these were the two Stoclets and Robert von Hirsch (See Sotheby Park Bernet, op. cit., p. x). Von Hirsch certainly knew what he was doing when he acquired this monumental little chess piece of a King from the Hohenzollern collections at Sigmaringen. Von Hirsch had other very fine games pieces, notably the early 12th century bone seated King chess piece from the Stapel collection, Darmstadt and a walrus Ivory Knight also from Sigmaringen, from where he also bought a beautiful draughtsman carved with a scene from the life of St Apollonius of Tyre.

As individual diminutive sculptures of enthroned Kings without attendants the V&A and Hohenzollern-von Hirsch Kings continue the tradition of Romanesque chess pieces, epitomised in the supreme figures from the group found on the Isle of Lewis and now divided between the British Museum and the National Museum of Scotland.