NEW YORK, NY.- Most know Jean-Antoine Watteau as a painter of amorous aristocrats and melancholy actors, a dreamer of exquisite parklands and impossibly refined fêtes. Few artists would seem further removed from the misery of war. And yet, early in his short career, Watteau created a number of military scenes—about a dozen paintings and some thirty drawings. For the most part, they were executed during the War of the Spanish Succession (1701– 14), which saw Louis XIV battle almost the whole of Europe in a bid to place his grandson, Philip, Duke of Anjou, on the Spanish throne. However, neither the turmoil of battle nor the suffering that ensued seems to have held much interest for Watteau. Instead, he focused on the prosaic aspects of military life—marches, halts, and encampments. The resulting works show quiet moments between the fighting, outside the regimented discipline of drills and battle, when soldiers could rest and daydream, smoke pipes and play cards. Although these themes are indebted to seventeenth-century Dutch and Flemish genre scenes, Watteau’s drawings and paintings are set apart by their focus on the common soldier. More than his predecessors, Watteau offers an intimate vision of war, one in which the human element comes to the fore. His soldiers are endowed with an inner life, with subjectivity. Unlike most seventeenth- and eighteenth-century artists, Watteau did not proceed methodically from compositional sketches, figural studies, and full-scale models to the final painting. Instead, his process followed the whims of his imagination and the demands of the moment. He began by drawing soldiers from life, many of whom he likely observed at a military encampment near his hometown of Valenciennes, in northeastern France, which he visited in 1710. Favoring natural poses, his drawings are united in their focus on states of absorption and withdrawal. Three Studies of Resting Soldiers is a prime example. Most likely depicting a single model, this magnificent sheet shows a soldier lying flat on his belly, another sprawled on his back, and a third propping himself up with his left arm as he looks dreamily into the distance. With striking naturalism, Watteau captures a succession of fleeting private moments at the margins of battle, moments of retreat into reverie and reflection. Three Views of a Soldier, One from Behind focuses similarly on its subject’s inner life. Like the man depicted in the aforementioned sheet, the three figures here are also probably the same model. Arrayed across the page, they are positioned with an exaggerated, almost balletic grace, toes pointed, heads cocked, and weapons extending the elegant lines of their limbs. Rather than expressing heroic action or demonstrating drills, their enigmatic poses communicate a sense of withdrawal. The figures seem not only unaware of the artist’s presence, but actively evading it, as though turning away to deflect his probing gaze. This soldier is absorbed in a world of private experience. In this and other drawings featured in the exhibition, Watteau lavishes a rare attention and care on a subject that, at the time, was regarded as mundane or even lowly. Nonetheless, the viewer is kept at a distance. Nothing about the soldiers’ faces or bodies hints at their thoughts or emotions; nothing gives us access to their state of mind. While the poses and attitudes of the soldiers indicate their immersion in their inner lives, the contours and contents of that life are frustratingly inaccessible. Ultimately, they are closed off within the shells of their bodies, opaque and unknowable. Whereas most painters of his time posed and sketched figures according to their role in an already worked-out composition, Watteau made his drawings without a specific end in mind. His studies provided him with a stable of figures that he would later arrange on the canvas. As a consequence, figures previously isolated in his sketchbook were brought together and juxtaposed in new social relationships. Watteau’s working method generated unusual effects, resulting in connections between individuals that are not entirely resolved. For example, despite their physical proximity, sometimes the soldiers appear to look down or off into the distance, lost in reflection. Other times, even when they face each other, it is not at all clear that they interact in meaningful ways. This often lends Watteau’s scenes a dreamlike ambiguity and mystery. The Frick’s Portal of Valenciennes and a related drawing, Three Studies of Soldiers Holding Muskets and Wearing Capes—shown together for the first time in this exhibition—are a case in point. In composing the painting, Watteau used the central figure in the drawing as the basis for the soldier on the far left of the canvas. In this new context, the man now faces another soldier, but the remnants of his previous isolation on the page persist. Because the figures were not originally drawn or conceived as engaging with each other, their gazes do not quite meet. What appears on first inspection to be a scene of conviviality (if not quite esprit de corps) gives way to a series of failed connections, a vision of uneasy and troubled social commerce. 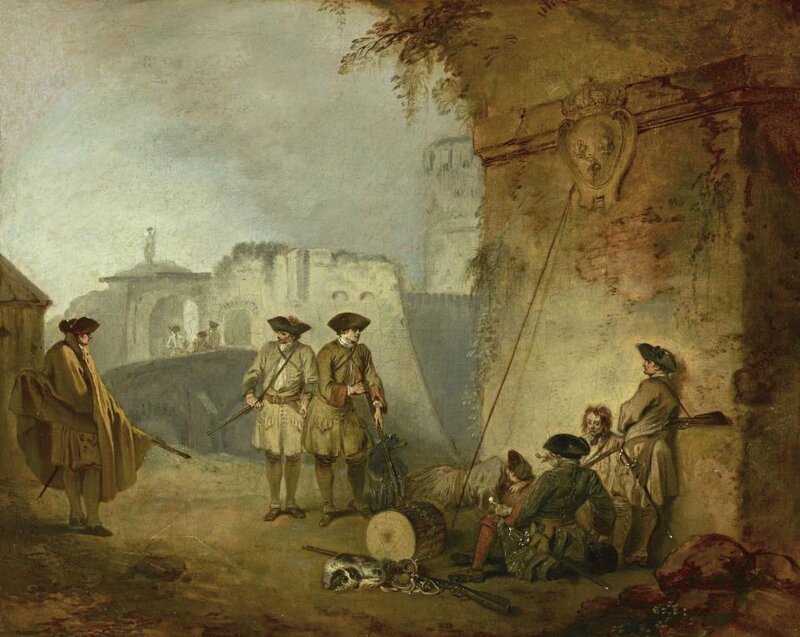 The situation is similar in a second Watteau painting featured in the exhibition, The Halt. Here the figures are connected by a network of gazes: an officer in red, on the left, glares at the man tending to his horse, while an elegantly dressed woman in yellow, perhaps his wife (wives were a common sight in military camps of the day), looks in the direction of the woman next to her. At the same time, the soldier with his arm in a sling, leaning against the tree, stares across the canvas at the pair of women, while soldiers on either side look down at nothing in particular. On the far right, another soldier looks down at the man lying at his feet. Various groups of conversing individuals populate the background, rounding out a scene brimming with apparent companionship and community. Yet a closer look shows that this scene is a more troubled social landscape than it first appears. Many of the figures, such as the man resting his head on his hand to the left of the tree, seem lost in their own world; even when one figure looks toward another, it is not clear that the gaze is returned or that a real connection has been made. An obvious case is the soldier on the far right looking down at the man with his head in his arms; the soldier with the sling looking toward the women also fails to connect with them. Even the gazes of the two women do not quite meet. 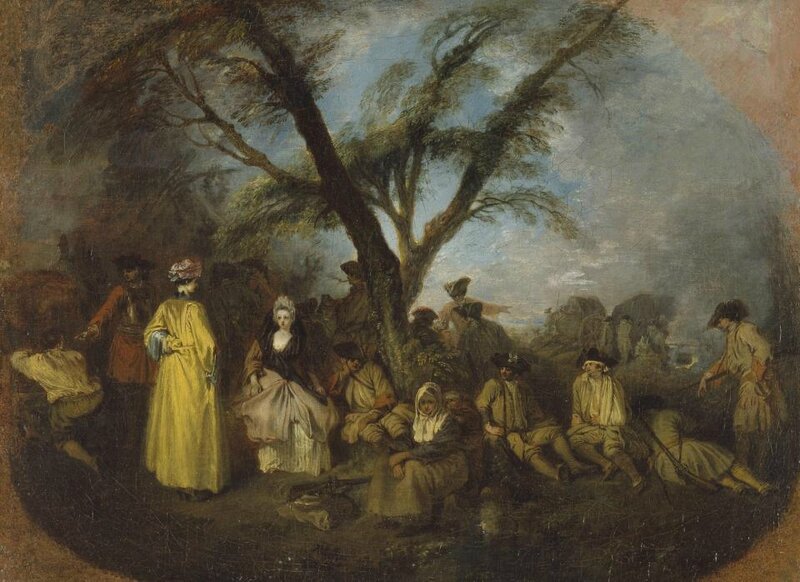 The figures’ lack of connection is the direct result of Watteau’s working method. Rather than being conceived as elements of a coherent, pre-determined composition, the figures in The Halt were executed as independent and unrelated studies—one of which, Three Studies of a Soldier and a Kneeling Man—also appears in the exhibition. Atypically, Watteau used all four figures from this drawing in his painting, although he separated and rearranged them on the canvas. For instance, the two men on the left in the drawing seem to be staring at each other, engaging in some kind of silent dialogue. In the painting, however, the crouching soldier is now shown looking up at the officer in red (left), leaving the other soldier (in the middle of the composition, in front of the tree) staring into space. Watteau’s process preserves the sense of opacity we observe in his studies. The drawings served as building blocks for a whole architecture of irresolution and ambiguity. What is the significance of Watteau’s vision? Cleary, his military paintings are not documentary transcriptions of soldiers’ lives, but rather scenes constructed with patent artifice. Though at first glance picturesque, the works can be seen as making a larger point about the way in which people relate to each other, about the connections that hold society together. For Watteau, the theme of military life provided especially fertile ground to explore this issue, for the absence of traditional familial and social bonds during times of war, coupled with the sheer struggle for survival, heightened the importance of understanding, at the most basic level, how people connect. From this perspective, the military scenes betray the essentially modern insight that society is held together by the thinnest of threads, that our connections are menaced by mutual incomprehension and estrangement. At the same time, the paintings’ acknowledgment that, despite this, the very existence of society depends on our forging ahead, gives them a poignancy that resonates today.