The Seven Sorrows of the Virgin, from Prayer Book of Cardinal Albrecht of Brandenburg, about 1525–1530, Bruges, Simon Bening. The J. Paul Getty Museum.

LOS ANGELES, CA.- Medieval and Renaissance manuscript illuminators sought to convey spiritual experiences through paint, ink, and gold in order to condense biblical narratives or complex prophecies into understandable images. Drawn primarily from the J. Paul Getty Museum’s extraordinary collection of manuscripts, this exhibition focuses on aspects of medieval spirituality that can be difficult to translate visually, including miraculous encounters with the divine, grand visions of the end of time, the intricacies of belief, and the intimate communications of prayer. Things Unseen: Vision, Belief, and Experience in Illuminated Manuscripts will be on view at the Getty Museum through September 25, 2016.

“Rather than attempting to illustrate the otherworldly events described in sacred texts, illuminators used painstaking artistry and a rich visual imagination to communicate the elusive and inexpressible nature of religious faith,” says Timothy Potts, director of the J. Paul Getty Museum. “Unlike the authors of scripture who transcribed their experience in writing, illuminators had the challenging task of visualizing things that could not be seen or easily understood. It is a remarkable achievement that they managed to succeed as well as they did in works of such enduring artistic brilliance”

The first section of the exhibition considers the innovative strategies used to invite viewers of manuscripts to experience divine visions. The exhibition’s second section focuses on the distillation of church teaching into the space of miniatures, margins, and initial letters. The last section explores prayer from two perspectives: manuscripts as tools to guide personal devotion and manuscripts that depict exemplary individuals, such as Christ, King David, and members of the nobility, in the act of prayer. 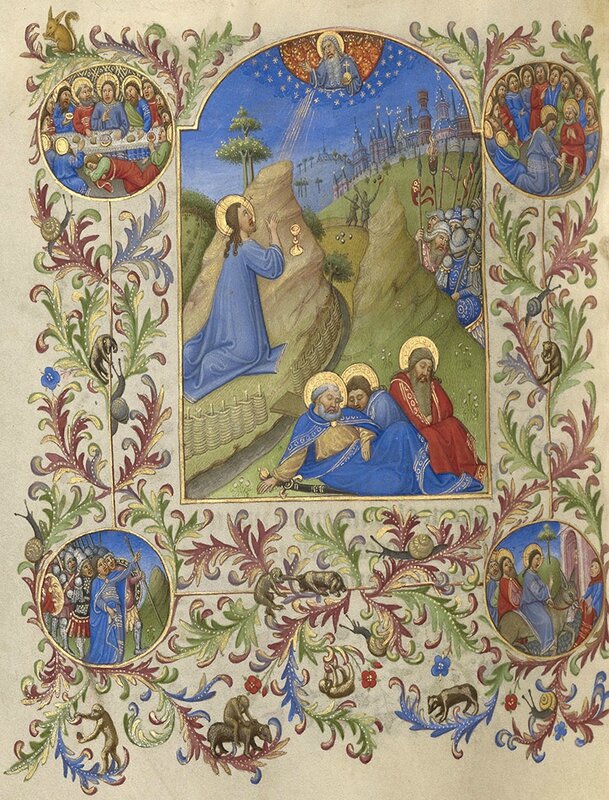 The Agony in the Garden, from Book of hours, about 1420, Paris, Spitz Master. The J. Paul Getty Museum.

Illuminating Visions
In Christian scripture, personal visions of the divine offered promises of future strength or warnings of impending doom. Jacob’s Dream (about 1400–10) is an elaborately illuminated vision experienced through Jacob’s dream. Here, Jacob, the leader of the Israelites, receives a vision from God. Though his eyes are closed in sleep, his dream is made visible to the manuscript’s readers. Crimson feathers from the angel’s wings threaten to wake him, suggesting the delicate balance between heavenly and earthly realms. While some artists interpreted visions as dreamlike scenes, others depicted complex revelations through intricate diagrams, as seen in The Wheel of Ezekiel: The Preeminence of the Lion (leaf from a private collection, 1320–21). Here, the artist had the daunting task of translating highly symbolic language into visual form. Four figures, an eagle, a lion, an ox, and a man rotate positions on spinning wheels, thus suggesting their movement around the kneeling priest. This innovative technique gave viewers access not only to the vision’s content but to the very sensation of receiving sacred revelation. Saint Francis Receiving the Stigmata, from Book of hours, about 1430–1440, France or England, Master of Sir John Fastolf. The J. Paul Getty Museum

Picturing Belief
As Church teachings developed over time, artists were called upon to convey complex systems of belief through easily readable images. Images of Christ, the Virgin Mary, or the Holy Trinity presented particular challenges for manuscript illuminators, who risked departing from official doctrine by merely changing the placement of one holy figure relative to another, for example. Artists created visual formulas to condense lengthy biblical narratives—including humanity’s fall from grace and redemption through Christ—into a single image. Illuminators also compressed important information, such as the genealogy of Christ, into miniatures, on the margins of pages; or within initial letters.

In the Mass of Saint Gregory (about 1480-1490), visual details reinforce the belief that bread and wine are ritually transformed into the physical body and blood of Christ. As Pope Gregory I prays before an altar, the bread of the Communion becomes a vision of the crucified body of Christ. An arc of blood makes visible the symbolic link between Christ’s blood and the chalice of wine. To further reinforce the theme of sacrifice that this Christian rite reenacts, the illuminator has included the weapons and implements of Christ’s Passion. Initial A: Christ Wiping Away the Tears of the Saints, cutting from an antiphonal, about 1330-40, Florence or Pisa, attributed to the Master of the Antiphonary of San Giovanni Fuorcivitas. The J. Paul Getty Museum


Painting Prayer
Manuscripts for personal use often contained illuminations that encouraged prayerful meditation or acted as tools to provide prayers for specific times of day, significant life events, and for the souls of the dead. These visual cues may represent subjects for prayerful reflection—such as the individual wounds of the crucified Christ (Getty Ms. 101, fol. 105v)—or act as memory aids to guide the faithful through a program of daily worship similar to that followed by church clergy. In addition to these meditative tools, manuscripts often depict spiritual leaders such as King David or Christ in the act of prayer. “Complex theological concepts such as transubstantiation and the nature of Christ were condensed into discrete, iconic illuminations that delighted the eye even while encapsulating religious theory,” explains Rheagan Martin, one of the two curators for the exhibition. Initial B: The Trinity, cutting from a gradual, about 1460-70, Ferrara, Taddeo Crivelli. The J. Paul Getty Museum. 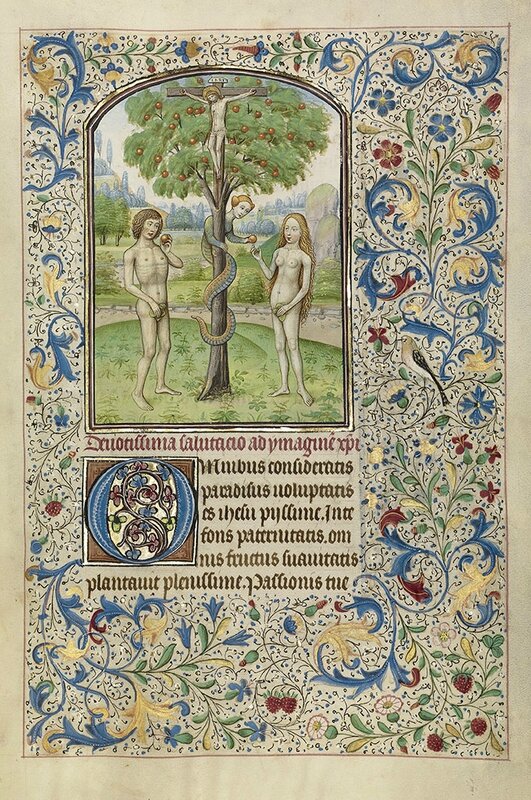