*Luxurious, rare and extremely elegant original Murphy coachwork
*Matching chassis, engine and coachwork
*One of the most original and correct Duesenbergs available
*In the fastidious ownership of prominent collectors 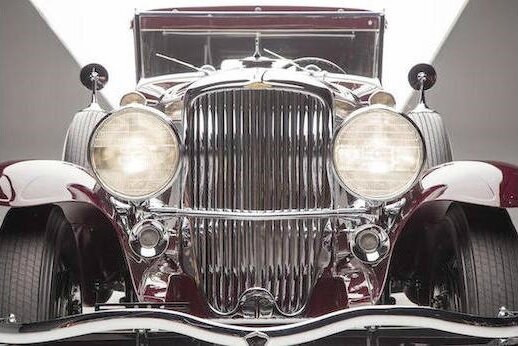 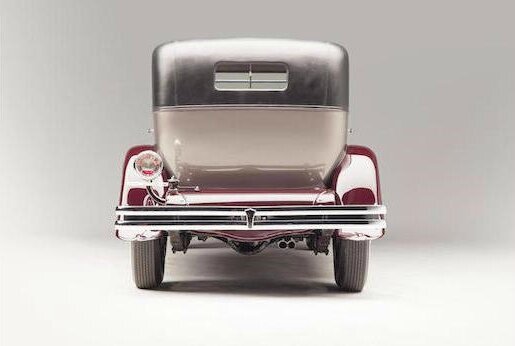 Few names in motoring are as redolent of wealth and power as Duesenberg. The ground-breaking company advertising placed in posh periodicals for the Model J was one of the first campaigns that deliberately did not show the product. A series of soft charcoal drawings portrayed a man in evening dress, seated in front of the fire in a great hall with a minstrels' gallery dominated by a huge pipe organ, or the silver-haired skipper of an America's Cup-type yacht, above a single line of script: "He drives a Duesenberg". Women drivers were not forgotten: under the portrait of an elegant lady giving directions to her head gardener, "She drives a Duesenberg" said it all, eloquently underscoring a scene where one could perceive an additional four gardeners in the distance, tending the immaculate grounds.

America took the new model to its heart and a new superlative was added to the language: to this day the phrase "It's a Doozy" is a universal term of ultimate approval, just as the Model J has become the ultimate collectors' automobile. Duesenberg unveiled its Model J – the embodiment of company owner E.L. Cord and chief engineer Fred Duesenberg's vision of "The World's Finest Motor Car" – at the New York Auto Salon in December 1928.

Among its remarkable features was a twin-cam race-bred engine – a purpose-built 32-valve Lycoming 419 cid DOHC straight-eight said to develop 265 bhp, although it is now recognized that the quoted Duesenberg power figures were perhaps a bit optimistic. Nevertheless, the actual output was certainly more than double the output of the previous claimant to the title of "America's most powerful car", the 112 bhp Chrysler Imperial 80. Moreover, this remarkable power unit endowed the Duesenberg with breathtaking performance. With light bodywork, such as a Murphy roadster, it was possible to achieve 90 mph in second gear with a maximum speed in the region of 110 mph in high gear. Ride and handling were exceptional for the period, matched by 15-inch hydraulic brakes all around. Every chassis built was tested for 500 miles on the Indianapolis Motor Speedway before being handed over to a leading coachbuilder for the construction of custom bodywork.

Though they were built during the Great Depression and cost more than a Rolls-Royce or a Hispano-Suiza, the Model J Duesenberg had no problems attracting customers in the beginning. Among the rich and famous who drove Duesenbergs were film stars Greta Garbo, Al Jolson, Gary Cooper, Clark Gable and Dolores del Rio, whose husband Cedric Gibbons, famed film art director and creator of the "Oscar" statuette, was also a keen Duesenberg owner. Millionaires like William Randolph Hearst, Phillip K. Wrigley and Howard Hughes, the famous Peruvian Chopitea brothers as well as royalty like King Alfonso XIII of Spain, Queen Marie of Yugoslavia, King Vittorio Emmanuel III of Italy and Prince Nicholas of Romania were all members of the exclusive Duesenberg set: in the end, fewer than 500 Model J's were built. The model remains one of the most coveted automobiles of all time. By far the most prolific builder on the Duesenberg chassis, the Walter M. Murphy Company of Pasadena, California produced roughly 100 Duesenberg bodies, a little more than one fifth of total production. The most popular Murphy style was the two-passenger Convertible Coupe with a rumble seat, now universally dubbed the Murphy Roadster. About 60 were made, although they are not all alike. Another signature design was the Town Cabriolet where the roof over the rear compartment is fixed in the manner of a faux Cabriolet. Coupled with its slim pillars, a signature Murphy styling motif, this design is regarded by many as a quintessential Duesenberg look, and one of the loveliest and most elegant formal cars ever conceived. It is believed that a mere four to six were built, and that only two survive. The exclusive Town Cabriolet was recognized for its beauty in period, as evidenced by the fact that Errett Lobban Cord had the Murphy style copied for the Cord L-29 model and the Auburn V-12 Salon series. It remains a coveted design today. Long wheelbase chassis 2401/J381 first shipped from the Duesenberg factory in Indianapolis to the company's Manhattan showroom. First owner was Nanaline Doris Duke, noted gem collector and widow of James Buchanan Duke, founder of the American Tobacco Company. She had the rolling chassis shipped across the United States to Murphy in Pasadena, with orders to construct a Town Cabriolet. Mrs. Duke took delivery on Halloween 1930, but only retained 2401/J381 for a short time, after which the car passed through a series of owners. Some years after Mrs. Duke's ownership it was purchased by J.S. Person who enjoyed the car, still in its original paint and upholstery, for about ten years. By 1958, 2401/J381 was in the ownership of Judge Pat Ferchill of Fort Worth, Texas, still in unrestored and factory original condition.

Dealer and auctioneer Dan Kruse acquired the car from Ferchill's estate in the early 1980s, and sold it to Robert McGowan in Connecticut. Bill Lassiter of Florida purchased 2401/J381 in 1985, and commissioned a comprehensive concours quality restoration in charcoal and burgundy with a black leather top. Subsequently, this exceptional automobile has been in Ralph Englestad's Imperial Palace Collection and the famous Blackhawk Collection owned by Don Williams. In recent years, an extensive mechanical refurbishment has been carried out by marque specialist Brian Joseph, including a clutch replacement, as well as thorough attention to the engine, steering and brakes. Service receipts are available for this work.

Remarkably, chassis 2401/J381 is still fitted with its original factory engine and carries its original coachbuilt Murphy body with pride. It is rare to encounter such a desirable style on a Duesenberg chassis where everything has been together since day one. Since its restoration, the car has been cared for by a series of fastidious owners, who have maintained it to a very high standard. Coupled with the dignified presence and lithe elegance of its graceful Murphy body, 2401/J381 represents an enviable opportunity to acquire a world class authentic and original Duesenberg with superb provenance.