A rare 'sacrificial red' dish, Xuande six-character mark within a double circle and of the period (1426-1435)

A rare 'sacrificial red' dish, Xuande six-character mark within a double circle and of the period (1426-1435) 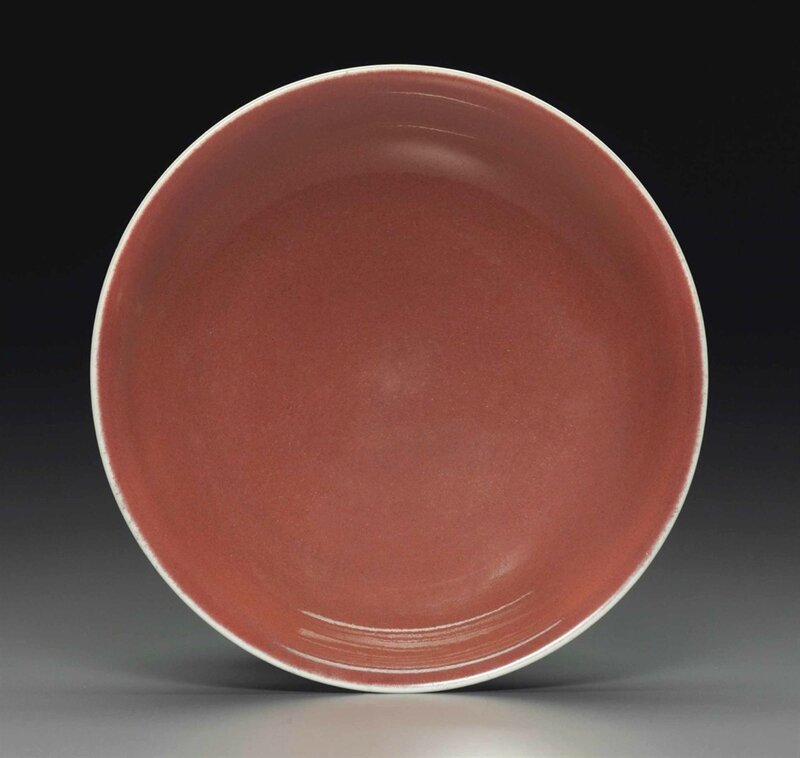 The dish has shallow rounded sides raised on a tapering foot that rise to a slightly everted rim, and is covered inside and out with a glaze of soft crushed-strawberry-red color below the white rim. 7¾ in. (19.7 cm.) diam.

Notes: One of the most widely admired glazes in the history of Chinese porcelain production is the rich copper-red glaze seen on this Xuande dish. Successfully fired copper-red-glazed porcelains from the early 15th century, like the current example, are especially favored by connoisseurs, due to the combination of color and texture of the glaze. Not only is this a particularly beautiful glaze, it is also rare, since successful firing of this copper-red glaze was extremely difficult.

Monochrome copper-red glazes on Jingdezhen porcelain seem to have first appeared in extremely small numbers during the Yuan dynasty, but a clear, brilliant red does not appear to have been achieved. Even in the Hongwu reign (1368-98) of the Ming dynasty, when renewed efforts were made by the potters to improve copper red, the glazes tended to be semi-opaque and to have a somewhat waxy sheen to their surface. They also failed to reach a good color, and instead varied from an orangey-red to a muddy brownish-pink.

In the early 15th century, however, renewed efforts were made at the Imperial kilns to produce a fine copper-red glaze, such as that seen on the current dish. They appear to have made significant changes to the base glaze, which improved the color of the red. There seem to have been three changes made to the base glazes previously used. The potters slightly increased the calcium content, so that the glaze was nearer to the normal lime-alkali glaze used for underglaze blue porcelains. This made the glaze a little more fluid at high temperatures, allowing more bubbles to escape and also allowing more of the batch material in the glaze to dissolve. Both techniques added to the clarity of the glaze, although there were still enough bubbles left to create the wonderful curdled texture characteristic of these glazes, which can clearly be seen on the current dish.

The potters also found that if they reduced the amount of copper in the glaze it created a purer red color, since too much copper tends to make the glazes look rather muddy, and they changed from using oxidized copper metal to using oxidized bronze. The tiny traces of tin, lead and antimony present in the oxidized bronze seem to have encouraged the reduction of the copper (Cu+) ions to colloidal copper metal during the cooling process, which helped to enhance the red color. In addition, the Xuande potters at the imperial kilns discovered that the red glazes were most successful when fired to a slightly higher temperature - about 1300o - slightly over the normal 1250-1280. Thus the potters of the early 15th century managed, at last, to produce rich cherry-red glazes, that are often called xianhong or 'fresh red', on porcelains, such as the current example, which remain the most sought-after of all copper-red wares.
It is also noteworthy that following the Hongwu Emperor's edict of 1369, requiring that porcelain vessels should be used on the Imperial Altars, red-glazed porcelains came to be used on theChaoritan, the Altar of the Sun, and hence the glaze on some of these copper-red vessels is called jihong, sacrificial red. Of course, as well as its use in ritual, the color red is associated in China with happiness and celebration.

A small number of Xuande copper-red dishes can be found in the Chinese palace collections. However, most of these examples have a six-character mark in underglaze blue on the base. There is one example which, like the present dish, bears an incised six-character Xuande mark. It was included in an exhibition of Xuande porcelains at the National Palace Museum, Taipei, and is illustrated in Catalogue of the Special Exhibition of Selected Hsuan-te Imperial Porcelains of the Ming Dynasty, Taipei, 1998, pp. 394-5, no. 170.
Two examples of Xuande-marked copper-red dishes in the Percival David Foundation with similar incised six-character marks inside a double circle are included in Illustrated Catalogue of Ming and Qing Monochrome Wares in the Percival David Foundation of Chinese Art, London, rev. ed. 1989, p. 33, no. 556, and p. 32, no. A519. The first is slightly larger and the second of similar size to the current dish. Another copper-red dish with incised Xuande mark, of smaller size (6 15/16 in.), was sold at Christie's New York, 21 September 2004, lot 258.

Commentaires sur A rare 'sacrificial red' dish, Xuande six-character mark within a double circle and of the period (1426-1435)