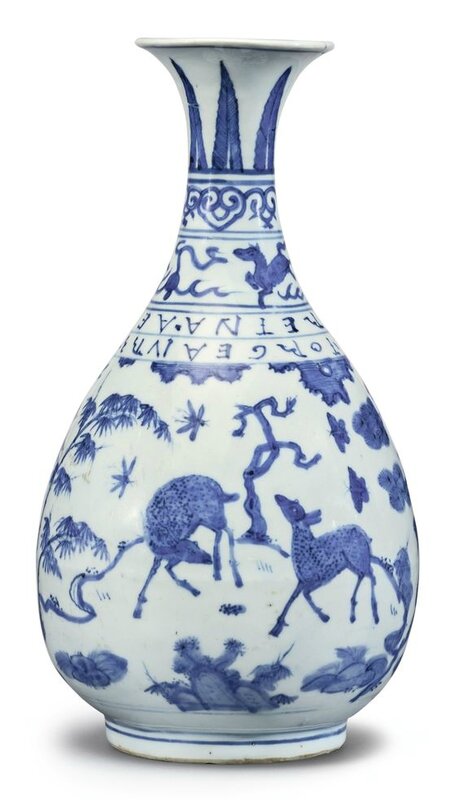 the pear-shaped body tapering to a waisted neck terminating in a flaring rim, finely painted in varying shades of a rich cobalt blue with longevity and abundance motifs, a pair of gamboling spotted deer and two fluttering butterflies amidst evergreens with gnarled, twisting trunks, a crane swooping downwards to meet its mate, a tall leafy bamboo tree with four bees flying overhead, the shoulder with an inverted Portuguese inscription ISTO MANDOU FAZER JORGE AIVRZ NA ERA DE 1552 REINA, surmounted by a band of mythical flying horses below a ruyi border and a row of upright stiff leaves, the base with a six-character mark in underglaze blue within a double circle - Height 10 1/4  in., 26 cm

Notes: This bottle vase belongs to a rare and significant group of vases collectively known as the ‘Jorge Alvarez bottles’, which are distinguished by an almost identical two-lined inverted inscription at the shoulder. These bottles provide important historical evidence to the Portuguese presence in China in the mid-sixteenth century and stand as the precursors to the Chinese export tradition which gathered momentum over the following decades. Only a small number of bottle vases of this type are known, and are found in the Victoria and Albert Museum, London, the Musée Guimet, Paris, the Walter’s Art Museum, Baltimore, the Caramulo Museum, Portugal, and the Ardebil Shrine Collection and the Chehel Sotun, Isfahan. Four further bottles were sold in our London rooms, 7th June 2000, lot 177; 19th June 2002, lot 188; 12th July 2006, lot 78; and 14th May 2008, lot 543.

The almost indecipherable inscription should probably read ISTO MANDOU FAZER JORGE ALVRS NA ERA DE 1552 REINA, which Filipa de Cruz Martins in the unpublished thesis Early Sino-Portuguese Porcelain, 1993, translates as ‘Jorge Alvarez ordered this to be made in the era of 1552’. The original text given to the Chinese artisan to copy would undoubtedly have specified the King in whose reign the pieces were made. However the combination of the craftsman’s poor understanding of the Portuguese language and limited space available on the vase most probably resulted in the exclusion of some of the text. Indeed, the appearance of a name in the Roman alphabet on pieces of Chinese porcelain is predated only by three bowls held in the Museu Raina D. Leonor in Beja, Portugal, the Duca de Martina Museum, Naples, and the Topkapi Saray Museum, Istanbul, which are dated 1541 and bear the name of Pedro de Faria.

Jorge Alvarez, merchant and adventurer, is often confused with his earlier namesake who headed the Portuguese expedition to China before his death in 1521. The person associated with these bottles however, is recorded as having been in 1552 in the island of Shangchuan, near Canton, a place where Portuguese merchants were believed to have conducted their commerce. Here he invited his friend, the Jesuit missionary Francis Xavier, to reside at his thatched hut. Xavier was taken suddenly ill and died in 1552 while still at Shangchuan. It is thus tempting to suggest that these bottles were perhaps commissioned as a tribute by Alvarez to his friend Xavier.

Foreign elements aside, the form and decorative scheme is confidently rendered with the deep violet-blues and dynamic painterly style associated with the best examples of the Jiajing period. The highly auspicious motif was particularly popular in this period, due to emperor’s personal fascination towards Daoism and its magical practices. Cranes and deer, both symbolic of immortality, create the auspicious pun liuhe, which refers to the six points of the universe including the four directions, zenith and nadir, while the pine and bamboo trees are symbolic of longevity and integrity.