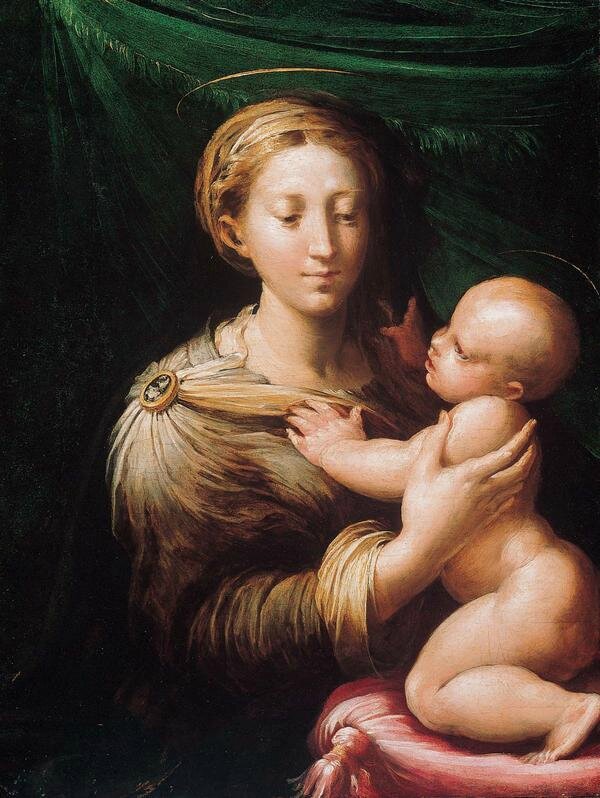 Hailed as the new Raphael, Parmigianino was one of the most influential artists of the sixteenth century, cultivating a mannered gracefulness of pose and physiognomy, combined with new and dramatic coloristic effects, that transformed the classicism of his Renaissance predecessors. In his Lives of the Artists (1568), Giorgio Vasari observed that Parmigianino “gave to his figures . . . a certain loveliness, sweetness, and charm in their attitudes which were particularly his own.” Parmigianino spent three years in Bologna (1527-30) where he produced a number of small devotional works in the swift, assured manner that typified his mature style. In the Kimbell panel, he draws upon the work of Leonardo, Raphael, and Michelangelo in counterposing the serenely pensive Virgin with her active Son, who tugs at his mother’s veil. But the compressed pose of the Christ Child and the tall, sweeping foreheads of mother and child introduce elements of Parmigianino’s distinctive Mannerism. The Virgin’s exquisite beauty is an outward sign of her inner grace, which Parmigianino reinforces through the golden strands of her ribboned hair and the fluid rhythms of her gossamer drapery.