From Cartier and Van Cleef & Arpels to David Webb and beyond, the September 22nd sale of Important Jewels in New York is headlined by a vast selection of signed jewels from a variety of celebrated makers. Classic white diamonds, such as this 27.35 carat oval-shaped diamond, and colored stones are also on offer in this first sale of the fall auction season. Whether you are seeking bold gold looks for daytime or diamond-set dazzlers for the evening, the Important Jewels sale will ensure your fall gets off to a fashion-forward start. Accompanied by AGL report no. CS 1076323 stating that the sapphire is of Kashmir origin, with no indications of heating. Note: The Art Nouveau style of jewelry (1895-1910) adopted the use of curved or agitated lines, and usually depicted the more menacing or sensual sides of nature, like the tendril of a vine. René Lalique (1860-1945) established himself as one of the leading Art Nouveau designers. He worked as a freelance jeweler for firms like Boucheron and Maison Vever until he started his own eponymous business in 1887. Lalique had the ability to deftly manipulate gold to a sculptural effect. He admired the work of the French sculptor Auguste Rodin (1840-1917) whose pieces were dramatic and displayed a sense of movement.

Sarah Bernhardt (1844-1923), was a French actress and frequent patron of Lalique’s work. In 1894, she reprised her role as Theodora, the Empress of Byzantine. That same year, Lalique sketched her character with a headdress of twisted snakes poised to strike, reminiscent of Medusa. Although this design was never realized, it inspired a large bodice ornament created circa 1898 to 1899 composed of nine coiled snakes with their mouths rendered in blue, green and black enamel. A similar piece, with long strands of baroque pearls suspended from eight of the nine snake’s mouths, was shown at the 1900 Paris Exposition Universelle and at the Turin World’s Fair in 1902. The ring offered here features a blue glass portrait of Medusa framed by a curving snake, with textured gold scales accented by green and blue enamel. This ring references Lalique’s original sketch inspired by Theodora. Accompanied by GIA report no. 1176440395 stating that the diamond is Fancy Intense Yellow, Natural Color, VS1 clarity. Accompanied by AGL report no. CS 1074675 stating that the sapphire is of Classic Burmese origin, with no indications of heating.

Accompanied by Gübelin report no. 16075089 stating that the sapphire is of Burmese origin, with no indications of heating. Together with an Information Sheet on unheated sapphires. Accompanied by AGL report no. CS 1075887 stating that the emerald is of Colombian origin, clarity enhancement: minor, type: traditional. Accompanied by GIA report no. 2171657447 stating that the diamond is Fancy Yellow, Natural Color, VVS2 clarity. Accompanied by SSEF report no. 84090 stating that the pearls are natural, saltwater. 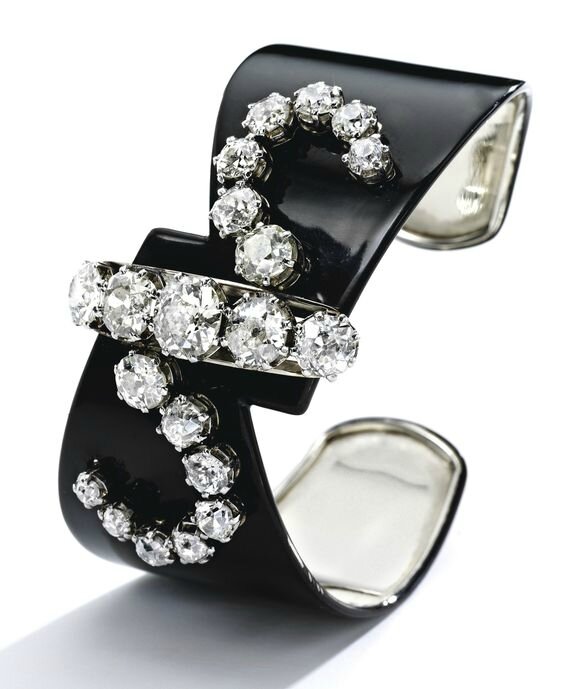 Notes: With simplicity, straight lines, and geometry, the Art Deco era straightened Art Nouveau’s naturalistic curves. It highlighted the ascent of the skyscraper, the machine age, new trends in fashion, and exhibited a fascination with the exotic. At this time, lacquered works of art were very desirable. To capitalize on the fashion craze, Cartier created many small decorative objects accented with the finish such as lipstick holders and vases. By the 1930s, Cartier started using lacquer to fashion jewels such as rings, brooches, and bracelets, of which very few still exist.

By the mid-1930s, Cartier’s clients commissioned the firm to create jewels such as a white gold and black lacquer bracelet accompanied by a detachable diamond clip, featured on page 61 of Judy Rudoe’s Cartier: 1900-1939.  Using stones provided by the patron, Cartier also fashioned a pair of pyramid-shaped and diamond encrusted clip brooches affixed to a white metal and black lacquer band. Most likely, the original owner commissioned Cartier to refashion her antique diamonds into this one-of-a-kind lacquered piece of jewelry. The cuff-bracelet shown here is quite rare and comes with its custom-made fitted box. Accompanied by Gübelin report no. 15105181 stating that the sapphire is of Burmese origin, with no indications of heating. 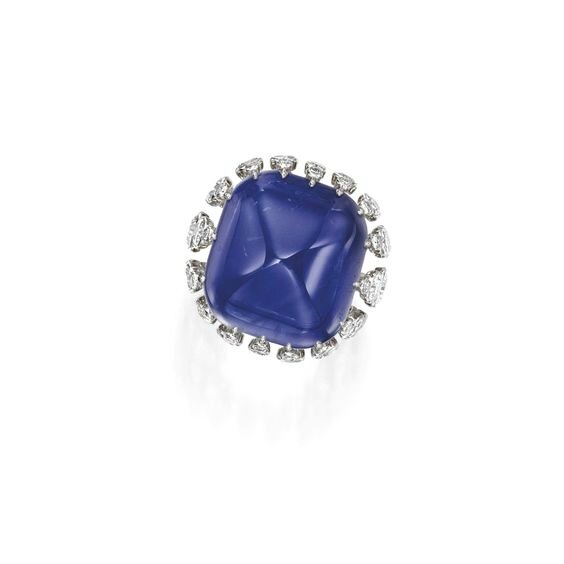 Accompanied by AGL report no. CS 1076215 stating that the sapphire is of Ceylon origin, with indications of heating.

Accompanied by GRS report no. GRS2014-028307 stating that the sapphire is of Ceylon origin, with indications of heating. Accompanied by AGL report no. CS 1074676 stating that the 84.90 carat yellow sapphire is of Ceylon in origin, with no indications of heating. 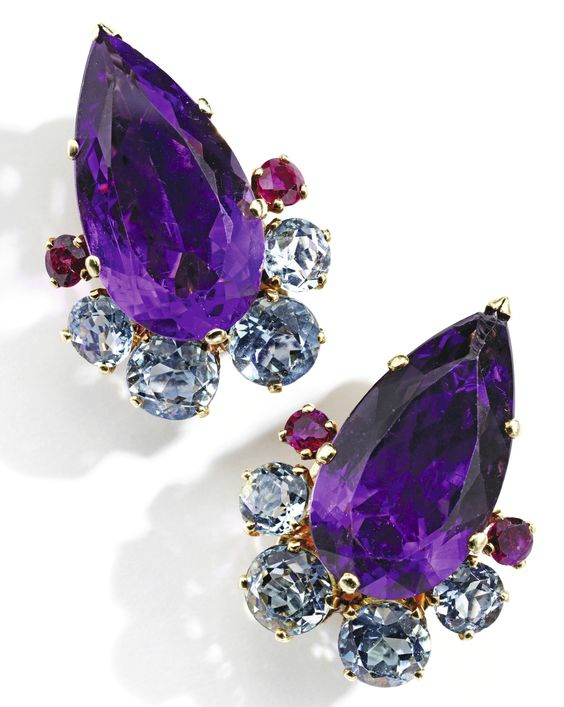 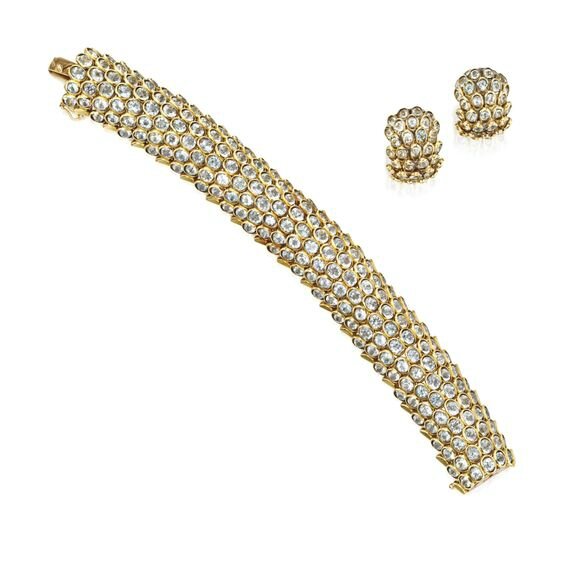 The bracelet and earclips of scaled design, the bracelet set with round and oval-shaped aquamarines, gross weight approximately 45 dwts, length 7¾ inches, with French assay and maker's marks; the earclips set with round aquamarines, gross weight approximately 11 dwts, with French assay and workshop marks for Davière. Note: Please note the diamonds have not been tested for natural origin of color. Note: Please note the diamonds have not been tested for natural origin of color.

Founded near St. Mark's square, the firm of Codognato has been creating jewels since 1866 that are prized for their quintessentially Venetian combination of exoticism and drama. The Romantics’ view of Venice had long been a source of inspiration for the Codognato family, including the city’s fascination with the strange and morbid.

The two necklaces illustrated here derive their meanings from the Catholic Church’s use of memento mori symbolism. Translating to ‘Reminder of Death,’ these symbols were often used by the Church to remind worshipers that only a life devoted to prayer could help avoid eternal punishment upon death. At the same time that memento mori images became widespread, skeletal figures were used as a reminder of the fragility (and unavoidable end) of earthly life. It was during this turbulent time, filled with wars and the Black Plague, that these saturnine symbols increased in popularity.

These two Codognato collars, from the mid-20th century, balance the idea of eternal glory (as symbolized with the use of ivy and an overwhelming presence of gold) with the imminent threat of death (as symbolized with the skeletons and skulls). It is also important to note that the ‘Pierrot’ necklace in particular uses the original religious overtones of memento mori as originally used by the Catholic Church. The central intaglio features a ‘Grim Reaper’-like skeleton flanked on his right with the holy symbols of the papal tiara and crosier, and on his left with ambiguous symbols which appear to represent a spear and a crown, referring to the Crucifixion. It is most fitting that this intaglio, illustrating symbols of both life and death, is set at the center of this design as it perfectly encompasses the memento mori creed.