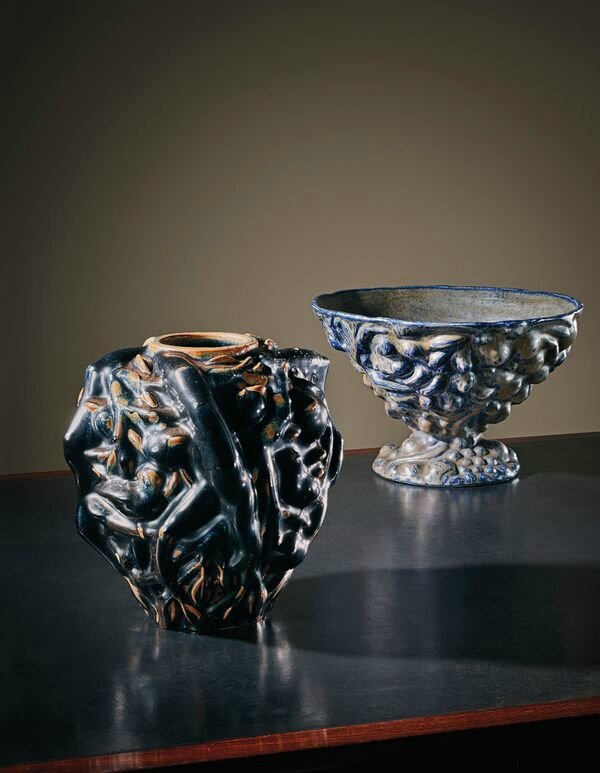 LONDON.- Phillips’ Autumn auctions of Design will be highlighted by an evening sale dedicated to Nordic Masters. Presenting 55 exceptional pieces from the early 20th Century to the present day, the sale is highlighted by two rare works by Axel Johann Salto (1889-1961), which will be offered at auction for the first time and come directly from the family of the artist. Together with the Design auction, which will also be held on 21 September, the auctions are expected to realise a combined total in excess of £3.5 million.

Alexander Payne, Worldwide Director of Design, Phillips: “Nordic Masters presents an unprecedented offering of Nordic Design to be auctioned in London. Featuring museum-quality pieces by Scandinavian master cabinet makers, ceramicists, glass makers and architects, the sale is led by a curated collection of early works by Poul Henningsen. These are exceptional in age, scale, condition and provenance and symbolise our approach to offering unique and important pieces of design which appeal to the greatest connoisseurs and collectors.”

Highlights from Nordic Masters include three rare pieces of glazed stoneware by the Danish artist Axel Johann Salto, one of the greatest sculptural potters and designers of the twentieth century. Two of these come directly from the Salto family, ‘The Italian Bowl’, is thought to be the original, made in the Saxbo workshop in 1931-1932 (estimate: £50,000-70,000). The ‘Sommervase’ was first produced by Royal Copenhagen in 1931, and the present example was made in 1957 and presented by Salto to his daughter Naja Salto, the distinguished artist, as a gift for her 14th birthday in 1959 (estimate: £40,000-60,000, illustrated above left). These pieces are full of energy and sensuality, expressing a sense of growth and movement as Salto continued to be inspired by natural forms throughout his lifetime. Provenance: Axel Salto, 1931-1932
Thence by descent to the present owner

Note: This rare piece of glazed stoneware by Axel Salto is thought to be the first with the title ‘The Italian Bowl’. Dating from 1931-1932, the piece was produced whilst Salto was collaborating with ceramicist Natalie Krebs in her workshop (SAXBO Denmark); it later went into limited production, in differing glazes, with Royal Copenhagen, Denmark. Lulu Salto Stephensen

The Danish artist Axel Salto (1889-1961) was one of the great sculptural potters and designers of the twentieth century. His highly individual, unusually baroque style resisted the plainer functionalist norm in so much contemporary Scandinavian ceramics and design, right through to his death at the beginning of the 1960s, when ‘Danish Modern’ was so in vogue. His powerfully expressive work was inspired by natural forms, by gourd shapes and seed pods, buds and opulent fruits bursting forth, all expressing a sense of growth and movement. It was nature's inner force that intrigued him. As he stated: “It is of greater importance for an artist to create in the spirit of nature than reproduce its outer manifestation”. His work, certainly ahead of its time in the inter-war years, investigated an almost unearthly and preternatural world, and anticipated some of the sculptural developments in European and American ceramics from the late 1950s, work which moved away from traditional shapes to vessels and sculpture that explored new types of organic structure. The originality of his work is all the more remarkable because it was produced largely in small factory-made editions, showing just how open the Danish workshops could be to progressive artistic ideas.

Salto studied at the Royal Danish Academy of Fine Arts in Copenhagen from 1909-1914, before travelling to Paris where he met Pablo Picasso and Henri Matisse, conversations which confirmed Salto’s avant-garde ambitions in art, realised not only in ceramics, but in painting, graphic design and illustration. He soon returned to work in Paris for long periods, and formed a group based there with other experimental Danish artists. Salto also established a short-lived but influential art journal The Blade, which was to pioneer the discussion of Modernist art and theory in Northern Europe. His practice of a variety of different art forms epitomised the interdisciplinary character of Scandinavian art and design, as well as its active collaboration with the factories. In the early 1920s Salto was beginning to concentrate on ceramics, his new direction confirmed by success with pieces made at Bing and Grondahl which were exhibited at the 1925 Paris Fair, and for which he was awarded a silver medal. By the beginning of the 1930s Salto was working in stoneware with Carl Halier and Saxbo. He also began his major collaboration in stoneware with the Royal Porcelain Manufactory in Copenhagen, one that would last for the rest of his life. Salto achieved numerous further honours, including the Eckersberg Medal in 1938, the Grand Prix at the Milan Triennial in 1951 and the Prince Eugen Medal in 1959.

Salto’s production concentrated mainly on mould-made editions with bravura modelling, enlivened by rich opulent glazing that varied in colour and texture as it poured and gathered over the deep relief surfaces. These two important and rare pieces belonged to Salto’s own family, particularly strong forms sprouting and burgeoning with plant growth. This particular example of his ‘Italian Bowl’ (‘Den Italienske Skaal’) is thought to be the original, made in the Saxbo workshop in 1931-1932, while later ones were produced by Royal Copehagen in other glazes. The ‘Summer Vase’ (‘Sommervase’) was first produced by Royal Copenhagen in 1931, but this particular piece was made in 1957, and presented by Salto to his daughter Naja Salto, the distinguished artist, as a gift for her 14th birthday in 1959. He was particularly pleased with this example, and evidently wanted to keep it in the family. Both forms have luxurious dark blue glazes, that on the ‘Summer Vase’ breaking through to a deep underlying iron. These pieces are full of energy and sensuality, expressing well the stylistic connection to Art Nouveau, Jugendstil, and even Classical form in Salto’s earlier designs, but already with a unique boldness that showed Scandinavian art at its most elemental and disquieting, truly work of the dark Northern spirit. Provenance: Gifted by the artist to his daughter, Naja Salto, 1959

Note: Salto’s ‘Sommervase’ was first made in 1931 by Royal Copenhagen, Denmark. The present lot comes from later on in the production and is stamped and marked. The three blue wave marks found on the underside of the vase refer to the model number. Particularly fond of the piece, Salto gifted it to his daughter, the late artist, Naja Salto, on the occasion of her 14th birthday in 1959. Lulu Salto Stephensen Note: Together with facsimile of the original owner’s purchase invoice for the present lot with inventory no. 133, dated 19th February 1946 from Grønningen, Copenhagen, an artist’s cooperative where Salto exhibited annually for a decade from 1936-1946.

This sale features a curated collection of ten early important works by Poul Henningsen, led by one of only three known remaining examples of the ‘Paris’ lamp. The ‘Paris’ lamp, was celebrated for its innovative distribution of light after Henningsen and his manufacturer Louis Poulsen spent years perfecting and experimentating with layered shade design. The ‘Paris’ lamp can be considered the progenitor for the “system of lamp shades that completely surround the source of light so that no radiating rays can meet the eye directly.” Notes: Poul Henningsen’s ‘Paris’ lamp, originally exhibited under the name Système PH at the Paris Exhibition in 1925, was celebrated for its innovative distribution of light. After a year of perfection and relentless experimentation with layered shade design, Louis Poulsen had the piece produced in German silver by Lauritz Henriksen’s Metalvarefabrik. The piece won a gold medal at the exhibition and the producers, Louis Poulsen, received silver. It has since been known as the ‘Paris’ lamp. Following the lights’ success in Paris, in an attempt to mimic the softer, gas lighting of Henningsen’s childhood, the piece was refined further. The shades were dulled and the voltage of the bulbs was worked upon until they emitted ‘an exceedingly beautiful light’ (Poul Henningsen, Nyt, December 1941). Later on in 1925, Henningsen adapted the ‘Paris’ lamp further when he was commissioned to design the lighting fixtures for the Schucani & à Porta restaurant in Copenhagen. In this revision he continued to reduce the glare by adding lightly matted gold plating. Axel Salto, with whom Henningsen had regularly worked, adorned the upper edges of the shades with leaf decorations.

The only known remaining examples of the ‘Paris’ lamp are one from the Paris exhibition of 1925, one from the Schucani & à Porta commission and the present lot.

Arne Jacobsen Unique chest of drawers was designed for the villa at Vedbæk Strandvej 464. The villa, built in 1933, is one of the first projects Jacobsen designed in its entirety, working on both the building’s exterior and interior furnishings. The chest of drawers, which stood in the bedroom of the villa, is a rare collaborative work between Rud. Rasmussen and the young architect. Note: Arne Jacobsen designed the present lot for the villa at Vedbæk Strandvej 464. The villa, built in 1933 for Mr Bernard Schepler, is one of the first projects Jacobsen designed in its entirety, working on both the building’s exterior and interior furnishings. The chest of drawers, which stood in the bedroom of the villa (illustrated), is a rare collaborative work between Rud. Rasmussen and the young architect Arne Jacobsen.

Phillips wishes to thank Niels Howalt Wallem Hvims from Rud. Rasmussen for his assistance with the cataloguing of the present lot.