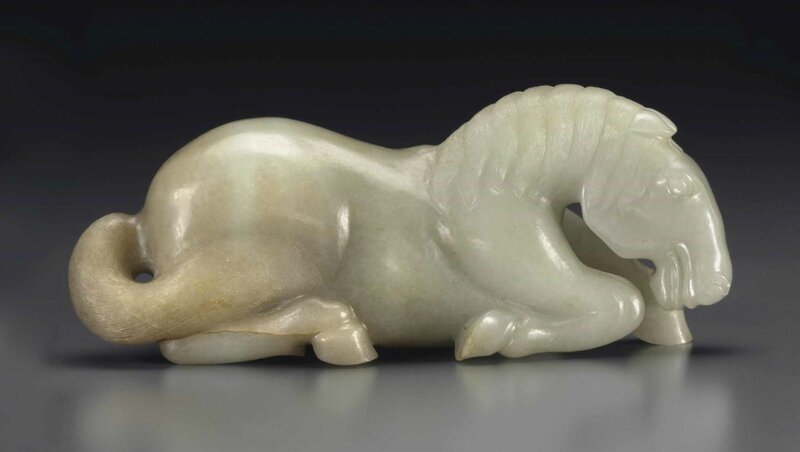 The horse is finely carved in a recumbent position with head slightly lowered, and the left foreleg bent while the other three legs are tucked along the sides of the body. Both the mane, which falls on the muscular cheeks of squared outline below the forward-pricked ears and on either side of the neck, and the long tail, which is tucked over the right rear leg and continues under the body, have fine hair markings. The softly polished stone has areas of pale brown color. 6 3/8 in. (16.2 cm.) long, wood stand, cloth box with quartzite clasps.

Notes: The present jade horse was included in the Oriental Ceramic Society exhibition, The Arts of the Sung Dynasty, 1960, no. 255, pl. 93, where a similar but smaller horse (2.7 in. long), from the collection of Captain Dugald Malcolm, is also illustrated, no. 261. Desmond Gure in "Jade of the Sung Group", T.O.C.S., vol. 32, 1959-60, p. 49, described the current figure as "particularly fine" and continued: "The modelling is strong and decisive, the formation of the head with its marked convexity of outline resembling that on a horse depicted on a mural painting in a Northern Sung tomb discovered at Pai-sha, in Honan in 1951." The mural is illustrated by Su Pai (ed.) in A Report on Three Sung Dynasty Tombs excavated at Pai-sha, Peking, 1957. In these Song dynasty murals one can see the same strong outline of the head, the broad forehead, prominent eyes and long mane that are found on the present horse.

A similar jade figure of a recumbent horse with legs tucked alongside and under the body, and with similarly rendered head and detailed mane, from a Jin-period (13th-14th century) site in Heilongjiang province, is illustrated Wenwu, 1977:4, pl. 7:2. Jessica Rawson, in Chinese Jade from the Neolithic to the Qing, British Museum, 1995, p. 372, fig. 1, illustrates a drawing of this Jin horse and notes, “it is thoroughly naturalistic in its pose.” Another comparable, but smaller (8 cm. long) jade figure of a horse, the color of the stone similar to that of the present horse, carved with head turned backwards, is illustrated in Arts from the Scholar's Studio, Oriental Ceramic Society, Hong Kong, 1986, pp. 176-77, no. 155, where the authors G. Tsang and H. Moss state that, "recent opinion on the dating of post-archaic jades would probably tend to date this example as Song or Yuan."