Mok Kim Chuan, Sotheby’s Head of Modern and Contemporary Southeast Asian Art, says, “This season, our global network and long-standing relationships with collectors has enabled us to once again assemble a line-up of exceptional works that showcase the broad and diverse spectrum of artistry in the Southeast Asia region. We are particularly honoured to present a remarkable compendium of thirty works from a distinguished Southeast Asian art connoisseur, which, collected over three decades, shows true dedication and knowledge. The Southeast Asian Art market continues to grow steadily as new and emerging artists step up to become the next wave, and it is also exciting to see increased participation from collectors from Taiwan and Hong Kong.”

Leading the sales is a single-owner collection of modern Indonesian art by pioneering artists such as Hendra Gunawan and Affandi that provide an insightful glimpse into the development of the country’s artistic maturation. Representing up to three decades of acquiring gems of Southeast Asian art history, this prominent omnibus stands as a clear testament to the passion and determination of the collector. The diversity of this grouping reveals the gentleman’s ceaseless yearning to garner a profound understanding about his collectibles, sharpen his eye and ultimately, elevate the quality of his assemblage. A total of 30 works from this Collection will be offered in both the Evening and Day sale.

One of the most prominent pieces from this special collection is Indonesian master Affandi’s Reclining Nude. It is an exceptional example of the modern artist’s leading edge and bold spirit. Though Affandi’s nude works are primarily painted in lime and yellow hues, the present lot stands as the only known, purely ‘red’ nude, making it exceptionally rare. The painting embodies his tenacious, lifelong endeavour to overcome conventional attitudes of society, and contest the status quo. During the modest time period from which this painting hails, using the bare, female form as a conduit to conjure sensuality was truly revolutionary. Another highlight to this collection is Hendra Gunawan’s Village Life. In this sprawling composition the Indonesian artist invites the viewer to share in the simple joys of the country folk as they eat al fresco. Far more than a mere descriptive scene, it is infused with a culmination of themes the artist deems worthy of celebration, such as familial relationships, community values and camaraderie. Inspired by commonplace happenings in the thoroughfares of his nation, Hendra yearned to immortalize picayune moments and elevate them to a sanctified level. 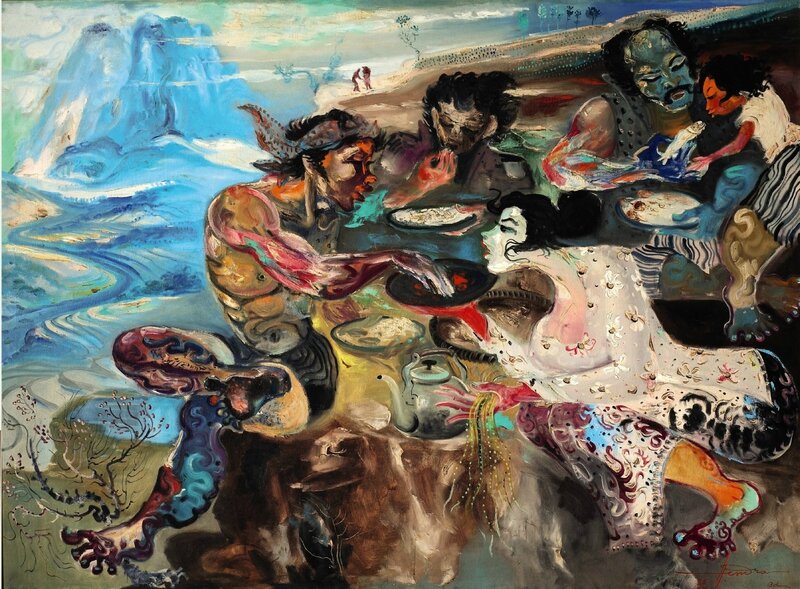 Lee Man Fong can be viewed as a realist painter whose compositions, largely influenced by animals and the daily routines of tropical life, celebrated movement and energy. Telanjang (Nude) is a deviation from such concepts, finding its voice in the classical nude art genre, a subject matter that the artist rarely touched upon. It is exceptionally special from his oeuvre, for it is a nude painting inspired by Western aesthetics, and therefore one of the very few such works from his career. Amongst the various themes depicted by Affandi, the Borobudur stands as one of the rarest subjects. There are only a few known works of this hallowed temple produced within his oeuvre, and Sotheby’s is privileged to offer one of the largest and most extraordinary works that capture this sanctified subject. Upon viewing this work, which was painted just six years prior to his death, it is evident that Affandi’s highly instinctive manner of painting allowed his oeuvre to grow steadily beyond reality, ultimately metamorphosing into a visual reflection of the cosmic nature of things. Borobudur and the Sun truly a provides a “unity with the cosmological forces through art”, with the temple itself seemingly ascending into the sky, attempting to commune with the divine. Lee Man Fong is one of the most notable painters in modern Indonesian art history. Drawing on his roots in Guangzhou, China, his immersion in Western Art from the Netherlands and the love of his Bali residence result in a unique blend of Eastern and Western characteristics. It sees the artist utilising Western oil painting to depict a consistent island narrative focusing on everyday figures and activities of rural life. The present piece, Satay Vendor with Mother and Son, depicts a singular moment between a vendor and his two eager customers; the intimacy of village life. An artist whose oeuvre is a visual celebration of a specific period in Vietnam’s history, Le Pho painted works that act as a guide to a world that no longer exists. To look at his works is to share in the artist’s memory as a youth growing up in Hanoi during the turn of the century, and to experience similar emotions of nostalgia, happiness, and loss. Maternity is the artist’s celebration of a woman and her child, and the strength of their eternal bond. It can be said that time stands still in Le Pho’s paintings, and as seen in Maternity, it is the lives of these women who have come to define Vietnam at the turn of the century.

Indonesian painter and leading artist Nyoman Masriadi is highly regarded for his satirical works that often create narratives to touch upon his antiestablishment ideologies. Notorious for his fresh and humorous narratives with controversial messages that shock viewers, Proud is an exceptional piece from Masriadi that critiques the education system. Often visual autobiographies that refer to his own life experiences and personal sentiments, it is conceivable that his dissatisfaction for possibly his own academic experiences at The Indonesian Art Institute (ISI) is revealed in this painting. An active critic of Indonesia’s socio-politics, Masriadi never ceases to entertain his viewers with his tongue in cheek humour and oftentimes sardonic outlook of the realities of life. Philippine-born Ronald Ventura is highly regarded as the enfant terrible of the Southeast Asian contemporary art scene. His paintings champion the art of appropriation, bringing together contrasting pictorial elements into fresh contexts. The lion, one of the artist’s favourite themes, is featured in Meeting Myths, where duelling worlds are combined, and the real and imagined are unified into a visual story that attracts and repels the viewer. A major highlight of the Day Sale is a meticulously-curated selection of works by promising emerging talents of the region such as Elmer Borlongan, Brian Uhing, Oky Rey Montha and Rafiee Ghani. These young artists – many of them new to auction – engage and inspire the audience with their creative energy and add new dimensions to Southeast Asia’s cultural offer. 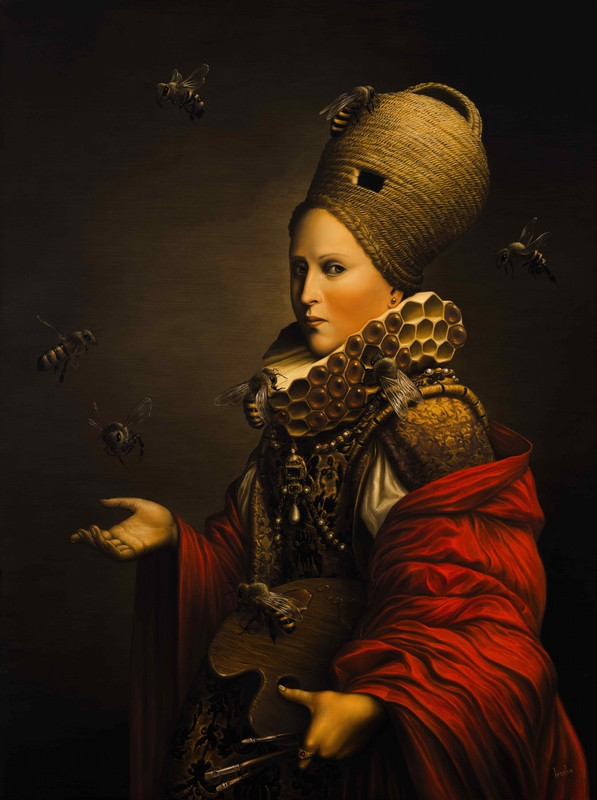