An outstanding and rare wucai 'mythical beast' jar and cover, Mark and period of Wanli (1573-1619)

An outstanding and rare wucai 'mythical beast' jar and cover, Mark and period of Wanli (1573-1619) of barrel form, the exterior of the rounded sides boldly and freely decorated in the wucai palette with four mythical beasts, including two qilin, leaping through through a setting detailed with pine trees and jagged rockwork beneath cloud wisps, the mythical beasts vibrantly coloured and rendered with windswept manes and tails, all between bands of coin diaper and lotus scrolls encircling the rim and foot respectively, the unglazed base of the jar centred with a recessed glazed medallion enclosing an underglaze-blue six-character reign mark within a double-circle, the well-fitted cover with a raised border of multi-coloured scrolls, encircling the central medallion enclosing three further mythical beasts beneath a pine tree, the straight sides with a band of waves interrupted by florets - 14.6 cm, 5 3/4  in.

Amusing the Wanli Emperor with Cricket and Chess
Li Baoping

It is extremely rare to find covered boxes in barrel form among Ming dynasty porcelain. Potted in a distinctive and pleasing form and inscribed with a reign mark of the Wanli period (1573-1620), the box is painted in attractive, brilliant wucai (‘five colour’) enamels with fascinating auspicious beasts depicted in lovely postures, including qilin. Its decoration is nearly identical to two other Wanli-marked wucai boxes from the collection of Iver Munthe Daae, a member of the Chinese Maritime Customs Service from 1867 to 1888, although the Daae boxes differ slightly in proportion (fig. 1). The usage of these drum-shaped boxes is still not fully understood. While some were probably made as cricket cages, related boxes, also extremely rare, may have been used by the Wanli emperor as containers for chess pieces (often known by its Japanese name go). In Japan, this form was later valued as mizusashi or water jars for the tea ceremony. Contained in this unique piece and related boxes is rich information on the art, intelligence, strategy and recreation of the Chinese royal court, and cultural interactions with Japan.

Playing with crickets has a long history in China and the mania for cricket fights reached new heights in the Ming dynasty, with one observer noting that on the death of one enthusiast’s prized cricket, “he made a silver coffin” for the insect, in the form of those made for Buddhist reliquaries. Porcelain cricket cages in barrel form, but with recessed covers, were first made for the Xuande Emperor (r. 1426-35), as discussed in Liu Xinyuan, Ming Xuande guanyao xishuai guan [Xuande period cricket jars from the Ming imperial kilns], Taipei, 1995. Cricket fights were particularly popular in the Wanli period, especially in Beijing and south China. The Wanli Emperor has gone down in history for decades of lethargic governance and may well have indulged in this pastime. A variety of imperial porcelain cricket cages from the Wanli period is illustrated in line drawings in Geng Baochang, Ming Qing ciqi jiandin [Appraisal of Ming and Qing Porcelains], Hong Kong, 1993, fig. 264; and a wucai box in the Shanghai Museum, with dragons chasing flaming pearls amongst clouds and above mountains and waves, in Lu Minghua,Shanghai Bowuguan cangpin yanjiu daxi/Studies of the Shanghai Museum Collections: A Series of Monographs. Mingdai guanyao ciqi [Ming imperial porcelain], Shanghai, 2007, pl. 3-104 (fig. 2). These drum-shaped boxes are, however, also often interpreted as chess jars. For example, Lu Minghua proposes this for the above-mentioned box in the Shanghai Museum, and cites from Veritable Records of the Ming Shenzong Emperor a list of a variety of porcelains urgently required by the Wanli emperor in the 12th year of his reign (1584), including chess pieces, chess jars, brush handles, and various other types of boxes, ibid., p. 171. Another record in the Gazetter of Jiangxi Province lists many imperial porcelains made for the Wanli emperor in the 11th year of his reign, including chess boards with dragon and clouds in wucai, as well as chess pieces with dragon design in underglaze blue, see Wang Guangyao, Ming dai gongting taoci shi [A history of ceramics for the Ming dynasty court], Beijing, 2010, p. 93. The polychrome dragon box in Shanghai may therefore represent a chess jar, having formed a set with the chess boards and chess pieces of similar decoration listed in the above record. The same may apply to a companion box missing the cover, illustrated in Suzanne Valenstein, The Herzman Collection of Chinese Ceramics, New York, 1992, pl. 85, now in the Metropolitan Museum of Art, New York.

Closely related is a blue and white Wanli-marked covered box of similar form and dragon design, from the collection of C.P. Lin, included as a chess jar in the exhibition Elegant Form and Harmonious Decoration: Four Dynasties of Jingdezhen Porcelain, Percival David Foundation, London, 1992, cat. no. 90. Covered boxes of drum form certainly have already been used as chess jars in the Song and Yuan dynasties; see two imperial blue and white boxes with dragon design, ascribed to the Wenzong emperor (r. 1328-32) of the Yuan dynasty, included in the exhibition Yuan’s and Ming’s Imperial Porcelains Unearthed from Jingdezhen, Yan-Huang Art Museum, Beijing, 1999, cat. nos. 1-2 (fig. 3), which also illustrates a Northern Song dynasty (960-1127) celadon-glazed covered box unearthed with chess pieces inside from the Yaozhou kiln site in Shaanxi, p. 13, fig. 9. A chess set including a pair of ceramic covered boxes in drum form with chess pieces inside, excavated from the tomb of Zhu Tan (1370-90), the Ming Prince Huang of Lu, are illustrated in the exhibition catalogue Ming: 50 Years that Changed China, the British Museum, London, 2014, fig. 168. 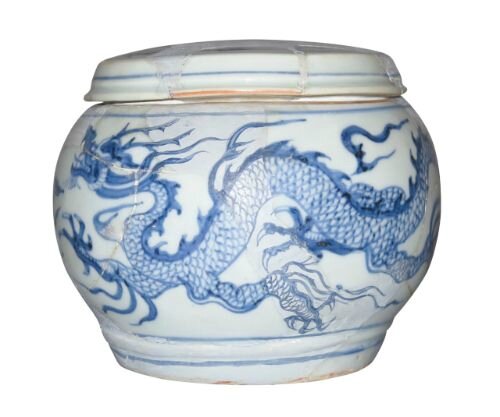 Compared with the above boxes and traditional chess jars used today, the current box is rather large for chess pieces and may seem more suitable as a venue for cricket fights. Although cricket cages are not expressly recorded on any list of porcelains made for the Wanli emperor, this may be because this petty sport was not officially approved as occupation for a sage king according to the Confucian tradition, but they may have figured among the “various forms of boxes” that were listed. For Wanli-marked cricket cages in other shapes, see a box from the Qing court collection, of six-lobed form and with cover missing, with polychrome dragon motif, included in The Complete Collection of Treasures of the Palace Museum. Porcelains in Polychrome and Contrasting Colours, Hong Kong, 1999, pl. 32, and covered boxes of fan form, one with underglaze blue dragon motif and the other with polychrome mythical beasts, see Enlightening Elegance: Imperial Porcelain of the Mid to Late. Ming. The Huaihaitang Collection, Art Museum, Chinese University of Hong Kong, Hong Kong, 2012, cat. nos. 102-103.