Exhibition outlines the relationship between Fontana and Melotti

Exhibition outlines the relationship between Fontana and Melotti LONDON.- Mazzoleni announces an exhibition outlining the influential relationship between two major Post-War Italian artists, Lucio Fontana (1899–1968) and Fausto Melotti (1901– 1986). Curated by Daniela Ferrari, art historian and curator at the Museum of Modern and Contemporary Art of Trento and Rovereto (MART), Italy, ‘Angelic Spaces and Infinite Geometries’ explores the parallels in the theory and practice of both artists, focusing on their later work and the ways in which both artists conceived of and responded to notions of space and geometry. The exhibition highlights the role that the two artists had in creating a new type of Italian art, particularly sculpture, that presented an innovative way of interpreting space, emptiness and infinity.

‘Art is a state of angelic spirit, geometric … addressed to the intellect and not to the senses.’ Melotti, 1935 These two statements form the backbone of the exhibition at Mazzoleni, which considers Fontana’s engagement with the eternal and infinite against Melotti’s preoccupation with balance, precision and local harmony. Informed by findings from the Melotti and Fontana archives and newly commissioned research, the exhibition highlights 25 works, and is focused on Fontana’s output during the 1950s and 1960s, and Melotti’s output from the 1960s onwards. It includes works in canvas, aluminium, copper, brass, steel and iron.

The friendship between Fontana and Melotti began in 1928 when they were both students of sculptor Adolfo Wildt (1868–1931) at the Accademia di Belle Arti di Brera in Milan. Wildt was then the leading Italian Symbolist sculptor and his contorted and manipulated marble works presented daring subversions of traditional sculpture that greatly influenced both Fontana and Melotti. Works by Wildt are on display to introduce the connection between the two artists and locate it in the early stages of their practices. The pair remained friends, sharing practical and creative support throughout the four decades until Fontana’s death in 1968, and providing long-standing influence for Melotti’s later development. 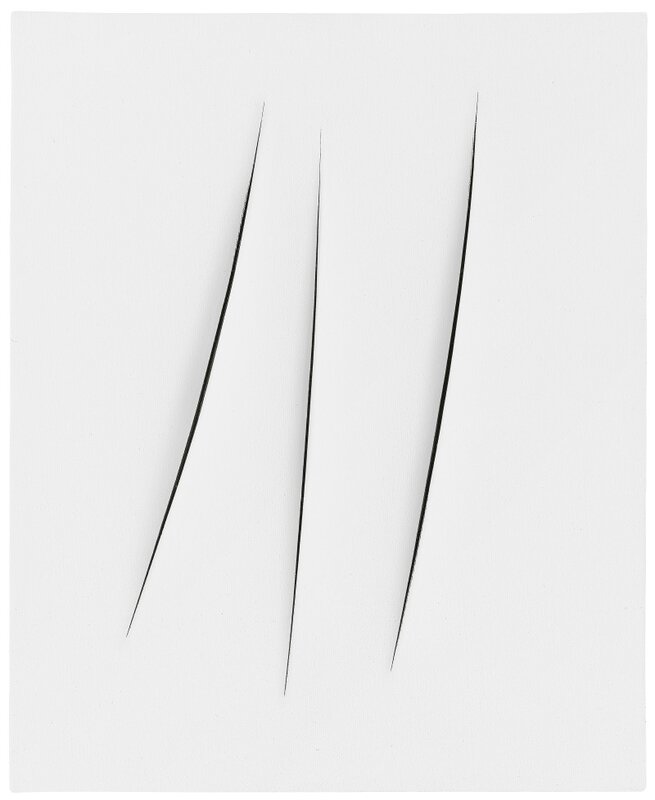 The exhibition examines how both Fontana and Melotti engaged with space and navigated the relationship between a work and its environment. Fontana’s cuts pierced the surface, opening up a new space behind the canvas, which was both a real space, liberated by the cut, and a transcendent one, opened up by the imagination. Melotti’s sculptures respond to movement and vibration, creating new spaces through interactions with their given environment. Both artists were projecting meaning onto an idea of emptiness. In this way they also provided a radical response to art history: where Fontana’s cuts challenged accepted notions of the materiality, Melotti strove to liberate sculpture from the centuries-old obsession with weight, through the production of light and delicate structures.

Lucio Fontana was one of the most important artists of the Post-War period in Italy. Born in Argentina in 1899, he spent his early years between Italy and Argentina, before returning permanently to Italy in 1927, the year before he met Fausto Melotti. Fontana is most wellknown for his ‘cuts’, which consist of slashed, ripped or punctured canvases, and his ‘End of God’ series of egg-shaped canvases, both of which provided vitally expressive, bombastic reinterpretations of painting that foregrounded the grand gesture and challenged the materiality of the form. On display are two striking examples of Fontana’s cuts (Concetti Spaziali) in bronze and aluminium, from 1962 and 1965 respectively. These works highlight Fontana’s material affinity with Melotti, in addition to their conceptual connectivity. Fausto Melotti is most well-known for work he produced from the 1950s to the 1980s, having experienced a hiatus in artistic production during the Second World War when much of his early output was destroyed by bombing. The exhibition coincides with a general reassessment of Melotti’s position in European Modernism, whereby his mid-century works have been inviting comparisons with Alberto Giacometti and Alexander Calder.

Before turning to art, Melotti studied engineering and music and his work is acutely influenced by his musical sensibility, reflecting musical theory in its composition, as well as having an aesthetic affinity with musical notation and, in some cases, causing physical reverberations in the air. Tre Tempi (1971) provides an example of the musical fluency in Melotti’s work, evoking rhythm both in its title as well as structure of finely wrought geometric brass shapes on poised poles in a three-part cadency. The exhibition also features a rare work from the 1930s – Scultura n.17 (Sculpture no.17) from 1935 – which demonstrates Melotti’s early interest in the sharp and delicate geometry which would define his later oeuvre. This focus on geometric balance and lightness of form is exemplified in works such as I Maggio (1971) with its elegant simplicity of line and Tema e Variazioni IX (1980-1986) which features an intricate yet refined configuration of linear pattern. It is in these works that the dialogue with Fontana’s Concetti Spaziali, such as a three slash white work from 1967, is most evident, revealing both artists’ shared preoccupation with defining space through a simple geometric construct.

The exhibition is accompanied by a fully illustrated catalogue with contributions by writers including the exhibition’s curator Daniela Ferrari, Flavia Frigeri (former curator of International Art at Tate), and art historian Sarah Whitfield.

Newly commissioned research examines Fontana and Melotti’s exhibitions at the Venice Biennale, as well as Wildt’s influence on the two artists. 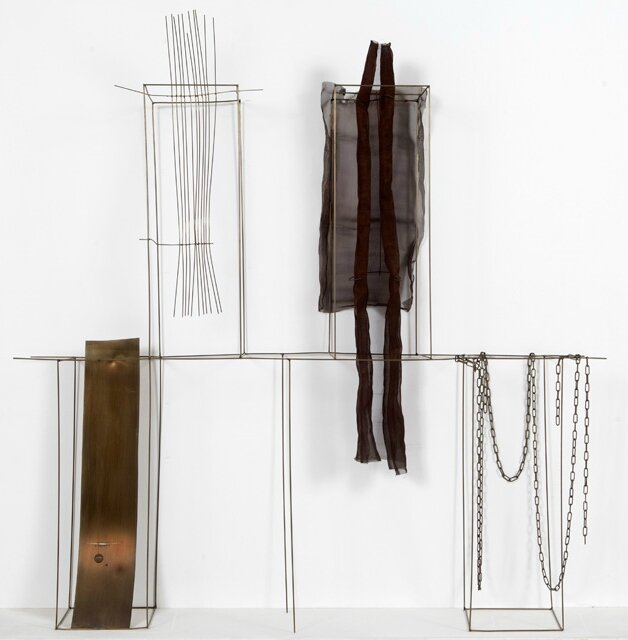 Commentaires sur Exhibition outlines the relationship between Fontana and Melotti