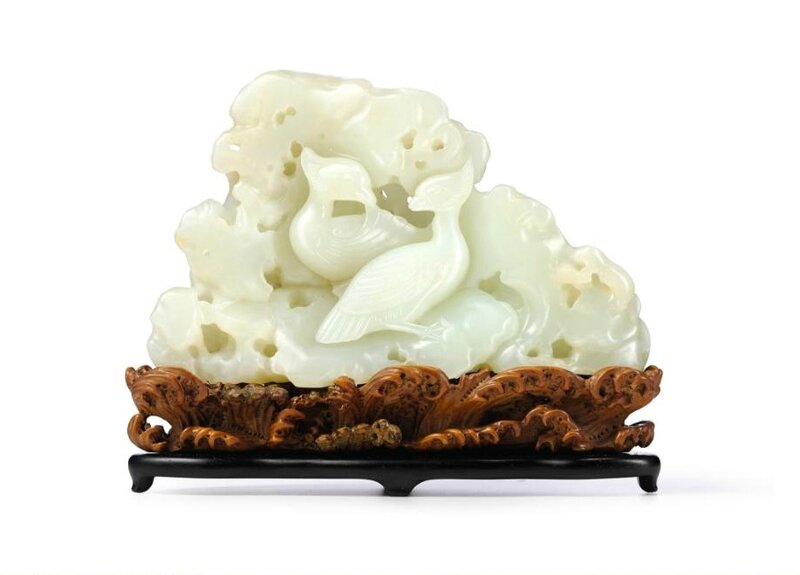 the lustrous white stone exquisitely worked in the form of a pair of birds, possibly mandarin ducks, against layers of pierced and jagged rockwork, one bird partially concealed behind the other, each meticulously rendered with a short beak and a shapely and finely incised crest atop the head, the plumage picked out with precision, one webbed foot of the bird at the front further realistically portrayed, boxwood stand: 11.1 cm, 4 3/8  in.

Notes: This charming piece is impressive for the exceptional luminous and even tone of the stone from which it has been fashioned, the quality of which has been accentuated through the exquisite carving of the two birds, possibly ducks, and the lustrous finish. By restricting the intricate carving to their feathers, the carver draws attention to the quality of the stone. This piece may have once adorned a table in one of the Qianlong Emperor’s many studios and served various purposes, such as a paperweight, brushrest, or purely for aesthetic enjoyment. Both the style and quality of the carving, together with its boxwood stand which has been finely carved in openwork with crashing waves, suggest an imperial provenance.

The birds depicted on this piece appear to be mandarin ducks, which are notable for their auspicious meaning. From the Yuan dynasty onwards, depictions of ducks swimming in pairs represented fidelity, marital bliss and happiness, as ducks are said to mate for life. Ducks are also associated with official life, as the name for duck, ya, is written with the radical for jia (first or best), and during the Qing dynasty, mandarin ducks were indicative of civil officials of the seventh rank.