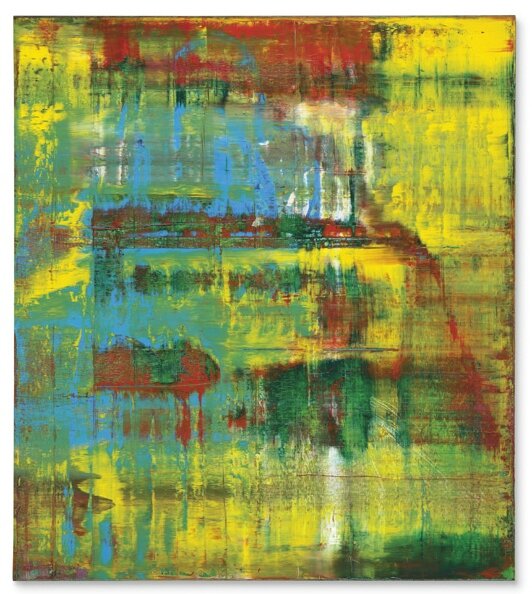 NEW YORK, NY.- Gerhard Richter’s Abstraktes Bild from the Collection of Eric Clapton will highlight Christie’s November 15, Evening Auction of Post-War and Contemporary Art in New York (Estimate in the range of $20million). Dating from the artist’s most celebrated period of abstraction and one of the highlights of the fall season, Abstraktes Bild was acquired by the rock legend Eric Clapton at auction in 2001. The painting will be unveiled at Christie’s London, and on view to the public from October 1-6, 2016.

Francis Outred, Chairman and Head of Post War and Contemporary Art EMERI, remarked: ‘This series marks a moment of great professional triumph for the Richter. First exhibited at Anthony d’Offay Gallery in 1995 as a group of four paintings, one of which is now in the joint collection of Tate and the National Galleries of Scotland, the further three were acquired at auction by Eric Clapton from the collection of Ulla and Heiner Pietzsch in 2001. The First of Clapton’s Richters to come to auction achieved a world record price for the artist in 2012 when it realised a figure of £21.3 million. We are delighted to unveil this third painting in London, the city where it was first shown, before it goes on to star in Christie’s November auctions of Post-War and Contemporary Art.’

Abstraktes Bild is the second canvas in Richter’s monumental four-part series of works created in 1994, the third of which resides in the joint collection of Tate and the National Galleries of Scotland. A superlative example of the artist’s celebrated abstraction, Abstraktes Bild is a dazzling, prismatic explosion of opulent jewelled tones. Standing as the culmination of a three-decade-long investigation into the properties of paint and perception, the works produced by Richter during the late 1980s and early 1990s represent the first major abstract achievements since those of Abstract Expressionism. Revealing and obscuring in equal measure, Richter’s squeegee gave rise to unplanned textures and formations that shed new light on the complex relationship between abstraction and figuration. With its kaleidoscopic collision of jewel-like tones, Abstraktes Bild confirms Robert Storr’s assertion that ‘it is hard to think of [Richter] as anything other than one of the great colourists of late twentieth-century painting’.

Abstraktes Bild was first shown in 1995 at Anthony d’Offay Gallery in London as part of the landmark exhibition Gerhard Richter: Painting in the Nineties. Following the artist’s career-defining retrospectives of 1991 and 1993-94, the show was a critical and commercial triumph, with works subsequently acquired by major museums across four continents. Three of the four paintings in the series were bought by the noted collectors Ulla and Heiner Pietzsch, from whom they were purchased by Clapton in 2001. Echoing the grid-like structures of Richter’s four-part Bach series (1992, Moderna Museet, Stockholm), and foreshadowing his six-part response to the work of John Cage (2006, Tate, London), the present work represents a chapter in the closely-entwined stories of music and abstraction. Indecipherable notations dance across its quivering horizontal planes, spawning a matrix of pounding rhythms, discordant harmonies, contrapuntal textures, interrupted cadences and chromatic inflections. In the clamouring polyphonic tremors of its surface, the work aspires to the condition of noise: a virtuosic rhapsody that strains to be heard.