heavily potted with low rounded sides supported on a straight foot, the exterior of the thick walls decorated in cobalt blue with six sprays of fruit comprising peach, pomegranate, loquat, grape, persimmon and longan, all above a band of radiating lotus lappets, the footrim picked out with evenly spaced detached sprays of florets, all between double-line borders encircling the rim and foot, inscribed in underglaze blue with a six-character horizontal reign mark below the double-lined rim; 28 cm, 11 in.

Notes: The present bowl with sprays of auspicious fruits is very rare and belongs to an interesting type of blue and white porcelain made during the Xuande period (1426-35), which is briefly discussed in lot 3631. Similar Xuande bowls with the fruit pattern, varying in size between 26 and 30 cm, are represented in the Palace Museum, Beijing, from the Qing Court collection, illustrated in The Complete Collection of Treasures of the Palace Museum. Blue and White Porcelain with Underglazed Red (I), Shanghai, 2000, pl. 145; one in the National Palace Museum, Taiwan, is published in Catalogue of the Special Exhibition of Selected Hsüan-te Imperial Porcelains of the Ming Dynasty, National Palace Museum, Taipei, 1998, cat. no. 47; one from the Sir Percival David Collection in the British Museum, London, in Oriental Ceramics. The World's Great Collections, vol. 6, Tokyo, 1982, no. 98; and a similar bowl in the Freer Gallery of Art, Washington, D.C., was included in the exhibition Ming Porcelains in the Freer Gallery of Art, Smithsonian Institution, Washington, D.C., 1953, cat. no. 10. 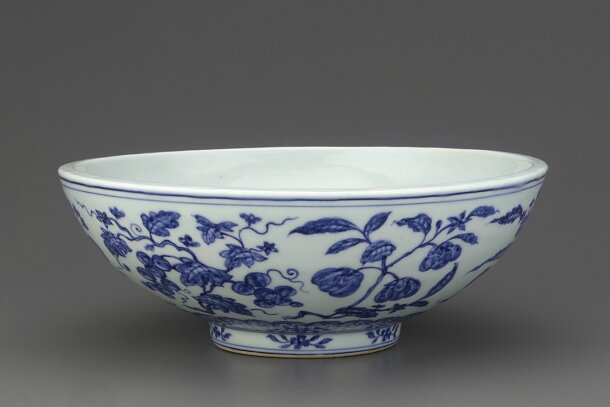 A fragmentary piece from the waste heaps of the Ming imperial kilns is illustrated in Lu Minghua, Shanghai Bowuguan zangpin yanjiu daxi/Studies of the Shanghai Museum Collections. A Series of Monographs: Mingdai guanyao ciqi [Ming imperial porcelain], Shanghai, 2007, pl. 3-121; and one from the Toguri collection was sold in our London rooms, 9th June 2004, lot 16, illustrated in Min Shin no bijutsu [The art of Ming and Qing], Tokyo, 1982, pl. 6, and in Encompassing Precious Beauty: The Songzhutang Collection of Imperial Chinese Ceramics, Hong Kong, 2016, pl. 8. A famous bowl of this type, formerly in the collections of Wu Lai Hsi (until 1937), Major L.F. Hay (until 1939), Lord Cunliffe (1899-1963), F. Gordon Morrill and the Meiyintang Collection, included in the exhibition Chinese Blue and White Porcelain: 14th to 19th Centuries, The Oriental Ceramic Society at The Arts Council Gallery, London, 1953-4, cat. no. 79, and illustrated in Regina Krahl, Chinese Ceramics from the Meiyintang Collection, London, 1994-2010, vol. 4, no. 1655, was sold in our London rooms, 26th May 1937, lot 49, and 16th June 1939, lot 77, and in these rooms, 5th October 2011, lot 13.