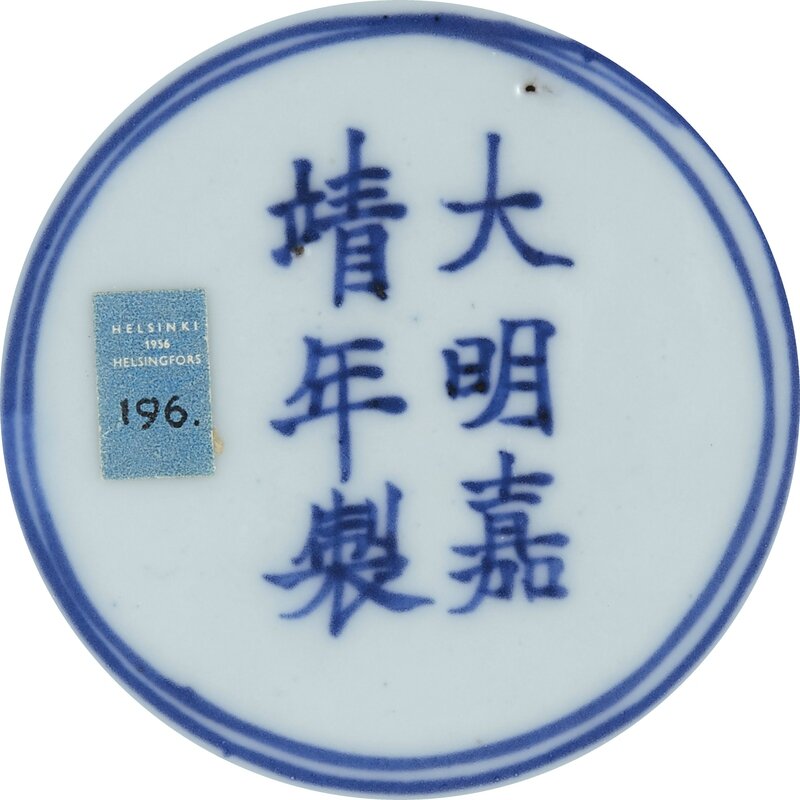 of circular form supported on a straight foot, the domed cover boldly painted with a central medallion enclosing three cranes in flight amongst scrolling ruyi clouds, the sides of the cover and the box similarly decorated with six further flying and swooping cranes amongst clouds, all divided by double-line borders, the base inscribed with a six-character reign mark within a double-circle; 20 cm, 7 7/8  in.

Notes: Finely painted in vibrant tones of cobalt with cranes amongst clouds, this box is impressive for its large size. A slightly smaller box of this design was sold twice in our London rooms, 13th March 1973, lot 242, and 14th December 1982, lot 177; another was sold at Christie’s London, 21st April 1986, lot 381; and a third, decorated on the cover with two cranes, was sold in our London room, 11th June 1996, lot 37. Compare also two slightly larger boxes similarly decorated on the cover with cranes, but the sides painted with lobed cartouches, one from the Qing Court collection and still in Beijing, illustrated in The Complete Collection of Treasures of the Palace Museum. Blue and White Porcelain with Underglaze Red (II), Shanghai, 2000, pl. 109, and the other published in Ceramic Art of The World. Ming Dynasty, vol. 14, Tokyo, 1976, col. pl. 103.

The motif of cranes flying among ruyi clouds, a common symbol of longevity with strong Daoist associations, was especially favoured by the Jiajing Emperor who was a keen Daoist. According to Jessica Harrison-Hall in Ming Ceramics, London, 2001, p. 255, the design of a crane flying up to the sun can also express the wish for the recipient to rise to high office.