WASHINGTON, DC.- At the September meeting of the board of trustees, the National Gallery of Art, Washington, acquired its first work by Caspar (or Gaspar) Netscher, A Woman Feeding a Parrot, with a Page (1666). This captivating painting makes its US debut in the exhibition Drawings for Paintings in the Age of Rembrandt (October 4, 2016–January 2, 2017) as one of fewer than 10 works by the artist on public view in the country. In addition, the painting is shown for the first time alongside a drawing from the British Museum that Netscher made after the painting.

"We are delighted to add a work by Caspar Netscher to the Gallery's outstanding collection of 17th-century Dutch high-life genre scenes," said Earl A. Powell III, director, National Gallery of Art, Washington. "We are very grateful to Lee and Juliet Folger for helping us acquire this superb work in another extraordinary demonstration of their generosity and commitment to the National Gallery of Art."

A Young Woman Feeding a Parrot, with a Page
Considered Netscher's finest work, this exceptional painting displays the full range of the Dutch master's technique, his talent as a portraitist, and his ability to depict interactions among the social elite. In the panel, a fashionable young woman wearing a gold-colored dress stands in a stone niche, gazing provocatively out at the viewer while she feeds an African grey parrot that has been removed from its cage. Netscher convincingly renders illusionistic space as well as a rich array of materials, with a bronze curtain pulled across the arch and a luxurious oriental carpet spilling over the ledge.

Drawings for Paintings in the Age of Rembrandt provides an unprecedented opportunity to view the painting with Netscher's pen and wash drawing made as a "ricordo," or record of the painting after it was sold. The British Museum graciously expedited the loan of this drawing to facilitate the presentation.

Provenance
In 1939 the Belgian owners of the painting deposited the work for safekeeping at the Musées Royaux des Beaux-Arts in Brussels. Confiscated during the German occupation of Belgium in 1942, the panel became part of Hermann Goering's collection. For sale at the Galerie Abels in Cologne following the war, it was purchased by a private collector, then donated in 1952 to the Von der Heydt Museum in Wuppertal, Germany where it remained until it was restituted to the heirs of the pre-war owners in 2014. Sold the same year at Christie's, New York, the work was purchased by the London art dealer Richard Green, from whom the Gallery is acquiring it from with a generous gift from the Lee and Juliet Folger Fund.

Drawings for Paintings in the Age of Rembrandt
With their vivid details and realistic nature, 17th-century Dutch landscapes, still lifes, and genre scenes seem to have been painted from life. In fact, most artists based their paintings on preliminary drawings. Drawings for Paintings in the Age of Rembrandt, on view in the West Building from October 4, 2016, through January 2, 2017, sheds light on the varied ways in which renowned artists of the Dutch Golden Age—including Rembrandt van Rijn, Aelbert Cuyp, Jacob van Ruisdael, and Pieter Jansz Saenredam—used drawings as part of the painting process.

The exhibition features nearly 100 such drawings, many of them paired with related paintings. Among the drawings are sheets from sketchbooks, rapidly executed compositional designs, detailed figure studies, and carefully rendered construction drawings made with the aid of a ruler and compass. The exhibition includes artists from throughout the 17th century and explores a wide variety of subjects, including depictions of everyday life, landscapes, architectural studies, portraits, still lifes, and history scenes. Underdrawings that artists made on their panels prior to painting are examined with the aid of infrared reflectography.

The exhibition is organized by the National Gallery of Art, Washington, and the Fondation Custodia, Collection Frits Lugt, Paris, where it will be on view from February 3 to May 7, 2017. Michiel van Musscher, An Artist in His Studio with His Drawings, mid-1660s, oil on panel, Liechtenstein, The Princely Collections, Vaduz-Vienna. © 2016 National Gallery of Art

This work beautifully illustrates how Dutch artists referred to their drawings when composing their paintings. Here, an artist mixes paints with a palette knife while holding his brushes as he makes a preliminary oil sketch on his canvas based on the drawings spread out near his feet. Rembrandt’s command of red chalk is exquisitely demonstrated in this sketch, with a range of tones capturing the light and shadow that fall on the man. Rembrandt used the figure to represent the Old Testament patriarch Jacob in Joseph Telling His Dreams, the oil sketch seen in the following slide. 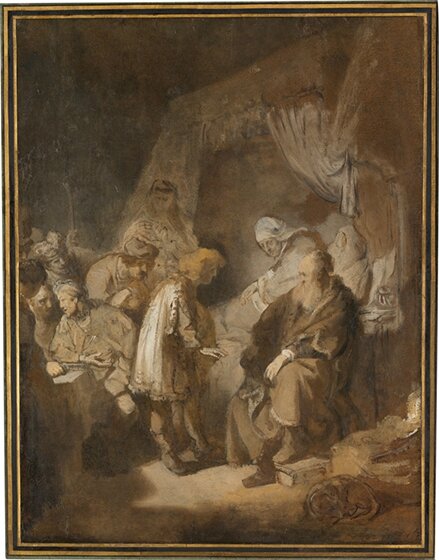 Aelbert Cuyp, Calcar with Monterberg in the Distance, early 1640s, chalk, wash, watercolor, partly brushed with gum arabic, Lent by The Metropolitan Museum of Art, From the Collection of Rita and Frits Markus, Bequest of Rita Markus, 2005. © 2016 National Gallery of Art

This drawing was originally part of a large sketchbook that Cuyp took with him on his travels along the Rhine River in the early 1640s. Meticulous studies of the natural world allowed Van der Ast to paint bouquets composed of flowers that actually bloomed at different times of the year. This tulip appears in the following still life, albeit slightly more closed than in the drawing. 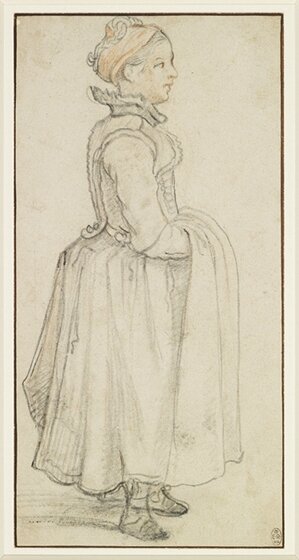 Hendrick Avercamp, A Standing Girl with Her Hands under Her Apron, c. 1620, chalk, Lent by Her Majesty Queen Elizabeth II. © 2016 National Gallery of Art

Avercamp sketched both outdoors and in the studio, where he posed models in costumes appropriate for his paintings. This girl is shown standing on skates in the center left foreground of the painting on the following slide, watching elegant people in a horse-drawn sled. 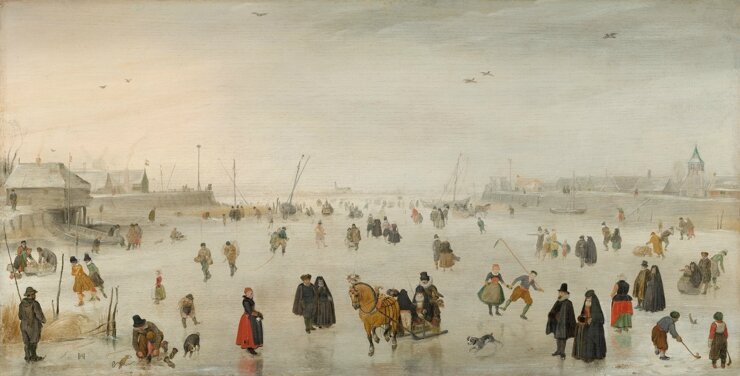 This woman, wearing a peasant dress and holding a glass, also appears in the next drawing by Cornelis Bega. The two figures correspond so closely that it seems clear both artists sketched the model during the same session at a drawing academy, but from slightly different angles. Berckheyde’s detailed, highly accurate drawing of the rear of Amsterdam’s town hall (the canal has since been filled in) served as inspiration for five paintings, including the one in the following slide. 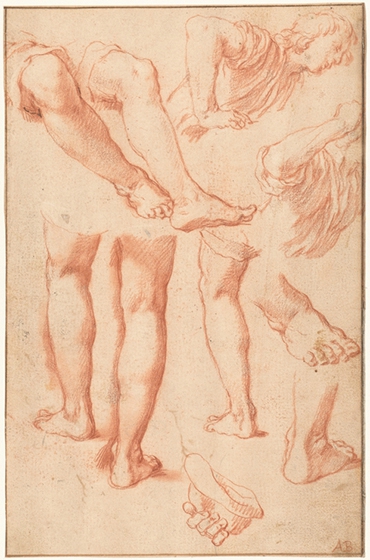 When De Bray used this drawing for his painting of the twins (next slide), he made a number of adjustments: here the children are asleep, but there they are wide awake; he also transformed their simple wicker basket into an ornate crib. To satisfy the high demand for his scenes of merry companies enjoying food and drink, Hals turned to his portfolio of figure studies, combining them in various arrangements and adapting them to suit his painterly needs. In this drawing the artist provided himself with more design options by giving the man two extra legs. Despite its tiny size, this drawing captures the sense of a bustling city densely packed with houses, and it served as the basis for the evocative painting in the following slide. Ruisdael apparently sketched the scene from scaffolding erected for the construction of the cupola on Amsterdam’s new town hall. 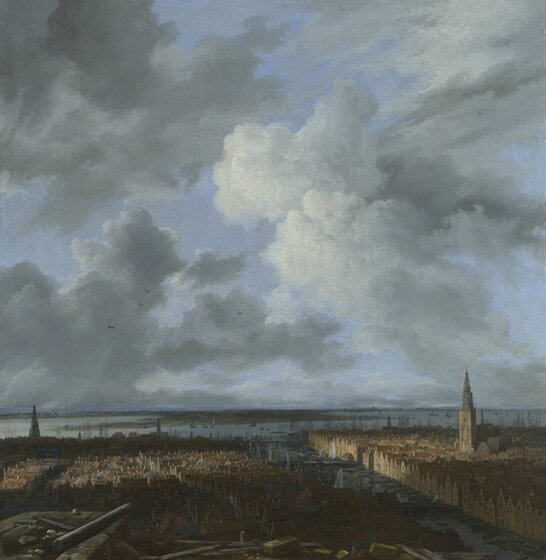 After drawing this freehand sketch of the church, Saenredam perfected his design and perspective system with a ruler and compass in a large construction drawing, which enabled him to transfer the scene to a wood panel before painting it.