of circular form, brightly painted in vivid shades of cobalt blue, the stepped domed cover with a central medallion enclosing sixteen boys at play in a fenced garden, with a boy dressed as a dignitary seated on a chair at the centre leading other boys around to read, beside a boy flying a kite and another group of boys gathered around a table, in the foreground a boy holding a flag behind another boy wearing an official hat riding on a hobby horse, next to another group of boys at play with garden foliage, the sides of the cover and the box decorated with striding dragons in pursuit of 'flaming pearls', the rims encircled by the babao ('Eight Treasures') alternating with stylised lingzhi sprays, skirted around the foot with a band of foliate scrolls, the base with a six-character reign mark within a double-circle; 22.5 cm, 8 7/8  in.

Notes: This box is striking for its charming and dynamic depiction of boy at play and illustrates the artistic vitality characteristic of blue and white wares of the Wanli reign. This design, which echoes the 'Hundred Boys' theme, was particularly popular in the late Ming dynasty, adorning a variety of objects made in different media, including lacquer, textile and porcelain. It represents the wish for many sons and descendants, particularly distinguished noble sons (guizi) who will pass the civil examination service with high honours. Another meaning of this motif is suggested by Rosemary E. Scott in Percival David Foundation of Chinese Art, London, 1989, p. 80, where she notes that scenes of boys at play may be linked to the Daoist theme of old regaining their youth. The Wanli Emperor was a devout Daoist, hence Daoist iconography was much favoured and readily employed by artists working for the court.

Boxes painted with this design are held in important museums and private collections worldwide: a box from the Qing Court collection and still in Beijing, is illustrated in The Complete Collection of Treasures of the Palace Museum. Blue and White Porcelain with Underglaze Red (II), Shanghai, 2000, pl. 181; one from the collection of the Zwinger in Dresden, is published in Porzellansammlung im Zwinger, Staaliche Kunstsammlungen, Dresden, 1982, p. 12; another in the Ashmolean Museum, Oxford, is illustrated in Daisy Lion-Goldschmidt, Ming Porcelain, London, 1978, pl. 212; a fourth box, in the Metropolitan Museum of Art, New York, is published in Oriental Ceramics. The World's Great Collections, Tokyo, 1982, vol. 2, pl. 93; and a further example, in the Philadelphia Museum of Art, Philadelphia, was included in the Museum's exhibition Ming Blue-and-White. An Exhibition of Blue-Decorated Porcelain of the Ming Dynasty, Philadelphia, 1949, and is illustrated in Philadelphia Museum Bulletin, vol. XLIV, no. 223, Autumn 1949, pl. 141; 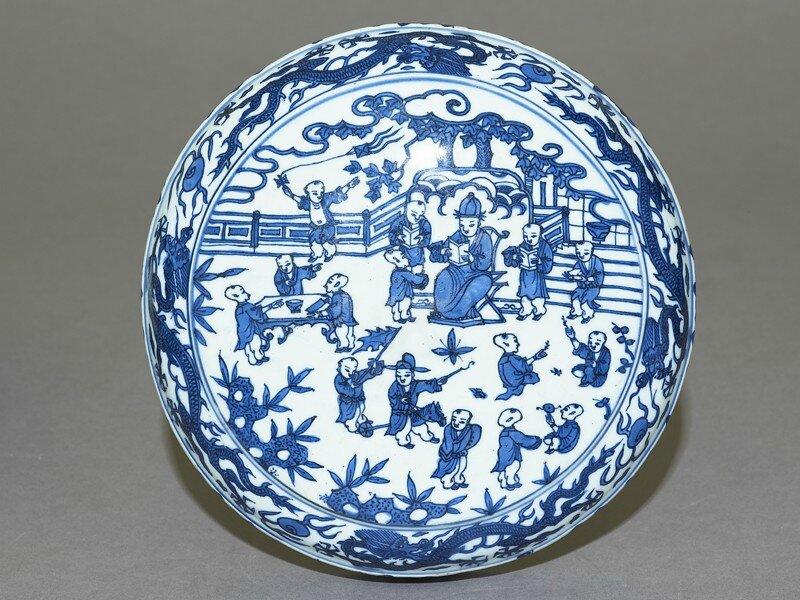