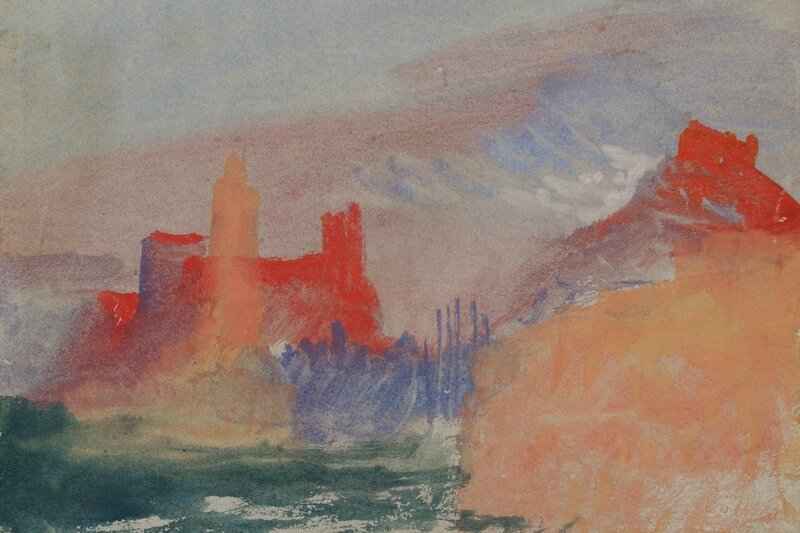 MARGATE.- Turner Contemporary presents JMW Turner: Adventures in Colour, the first exhibition to examine the radical use of colour in Turner’s work. The exhibition features more than 100 works in both oil and watercolour, with the fullest survey of the artist’s watercolours of Margate yet to be shown in the gallery. The show is curated by leading Turner expert and art historian Ian Warrell.

A highlight of the exhibition is Turner’s watercolour View of the Beach at Margate , which was only recently attributed to the artist. The work was part of a cache sold by Mrs Booth and her son in 1865 and was acquired by Manchester collector H T Broadhurst. The work was inherited by his son Sir Edward Tootal Broadhurst, and on its death was given to the Whitworth. The work was not accessioned as a Turner, and was only recently discovered by Ian Warrell. This is the first time the painting has gone on display at Turner Contemporary. Colour is the essence of JMW Turner’s work, and his distinctive, sometimes eccentric use of vibrant colour was central to his success as an artist. The exhibition highlights Turner’s engagement with developments in colour theory and his adoption and exploitation of new materials. Beginning with the more traditional ‘Old Master’ aesthetic that Turner quickly matched and then superseded, the exhibition charts the impact made by the artist’s experimental techniques.

The exhibition examines the impact Turner’s love of Margate had on his use of colour. Turner spent much time in Margate in his later life, drawn to its special light. The warm, if unconventional, connection that Turner felt for his landlady, Mrs Booth, led to an informal attitude which pervades the many studies he made looking out from her house across the harbour. Working in this private sphere led to a greater experimentation, including in his use of colour. For Turner, location was of great importance. He remarked to the influential writer and art critic John Ruskin that “…the skies over Thanet are the loveliest in all Europe” . The unique quality of light in this part of Kent drew Turner back time and again. More than 100 of Turner’s works, including some of his most famous seascapes, were inspired by the East Kent coast. Margate was the starting point for his visits to Europe, and a love of the sea stayed with him all his life.

Turner’s thirst for travel is explored in a selection of rarely-seen watercolours, distinguished by their use of fiery reds and intense blues, from his tour of the Mediterranean coast. The exhibition culminates in a group of atmospheric late oil paintings, described in the Spectator as ‘freaks of chromomania’ but later regarded as amongst his greatest masterpieces.

Curator Ian Warrell said: “Colour is the essence of Turner’s work, and his distinctive, sometimes eccentric use of vibra nt colour was absolutely central to his achievement as an artist. In placing colour at the heart of the project the familiar outline of Turner’s life and art is explored in a new way."