well proportioned and potted of facetted octagonal form, the tapered body gently sweeping up to a wide shoulder and surmounted by a waisted neck and flared rim, all supported on a short splayed foot of corresponding form, evenly covered overall save for the footring with a lustrous and luminous pale greyish-blue glaze densely suffused with fine crackles, the base with an underglaze-blue six-character seal mark, wood stand; 33.1 cm, 13 in.

Notes: Deceptively simple in form and design, this vase contrasts markedly with the richly ornamented decorative style that is generally associated with the Qianlong period, and is a fine example of the skill of the potters in Jingdezhen in creating a subtle and smooth glaze in imitation of Ru ware, one of the ‘five great wares’ of the Song period. This vase thus reflects the Qianlong Emperor’s penchant for these early wares, which he not only collected but also commissioned the imperial kilns to recreate or imitate. 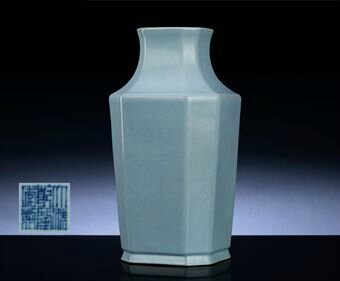