CLEVELAND, OH.- Myth and Mystique: Cleveland’s Gothic Table Fountain, for the first time, presents the Cleveland Museum of Art’s Gothic table fountain as the focus of a single exhibition. The table fountain is being displayed among a group of objects including luxury silver, hand-washing vessels, enamels, illuminated manuscripts and a major painting. Each informs some aspect of the fountain’s history, functionality, presumed use and context, materials, technique, dating and style. Some of these works are important international loans, notably Jan van Eyck’s painting Madonna at the Fountain from the Royal Museum of Fine Arts, Antwerp, which also comprises part of the museum’s centennial loan program. Van Eyck is considered the most significant Northern Renaissance artist of the 15th century, and only about 25 surviving paintings can be confidently attributed to him; Madonna at the Fountain is one of them. Since most of van Eyck’s paintings are rarely permitted to travel, this is only the second time in history that a work by the artist has been exhibited in Cleveland. 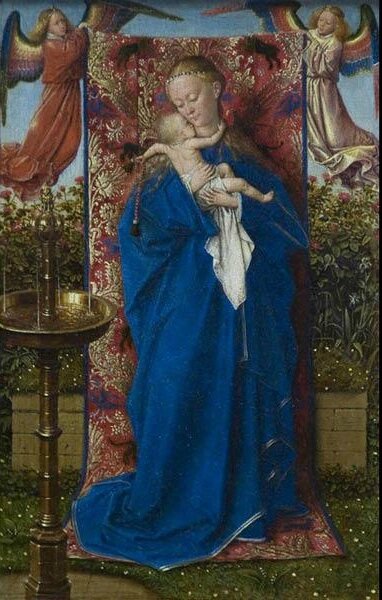 Also on view are the Grandes Chroniques de France from the Bibliothèque nationale de France in Paris. Commissioned by the French king Charles V (reigned 1364–80), this rarely traveled and light-sensitive manuscript is a vernacular history of the French kings assembled from translated Latin chronicles and other medieval documents. Due to the sensitivity of the object, the Grandes Chroniques de France will only be on view until January 9, 2017. Myth and Mystique: Cleveland’s Gothic Table Fountain is co-curated by Stephen N. Fliegel, curator of medieval art at the Cleveland Museum of Art, and Elina Gertsman, professor of art history at Case Western Reserve University. Admission to the show is free, and the exhibition will remain on view in the Julia and Larry Pollock Focus Gallery through February 26, 2017.

“The Cleveland Museum of Art’s Gothic table fountain is one of the rarest and most significant objects in the museum’s renowned medieval collection,” said William M. Griswold, director of the Cleveland Museum of Art. “We are fortunate to showcase this treasure among other iconic masterworks including Madonna at the Fountain and the Grandes Chroniques de France. These objects establish a rich context for the table fountain and answer questions about its origin, history and functionality. By bringing these artworks together, the exhibition speaks to the global influence of the museum and offers a true, once-in-a- lifetime opportunity for visitors.”

“The exhibition explores one of the world’s rarest medieval objects––the last surviving Gothic table fountain––and the only exemplar of its genre,” said Fliegel. “It is elucidated in the context of two royal manuscripts, the Hours of Jeanne d’Evreux and the Grandes Chroniques de France, commissioned by the French king Charles V in 1378, both of which rarely travel. The presence of a small painting by Jan van Eyck, the greatest northern painter of the 15th century, illustrates conceptually how the Cleveland fountain may have originally been deployed. The loan of the van Eyck by the Museum of Fine Arts in Antwerp is unprecedented.” 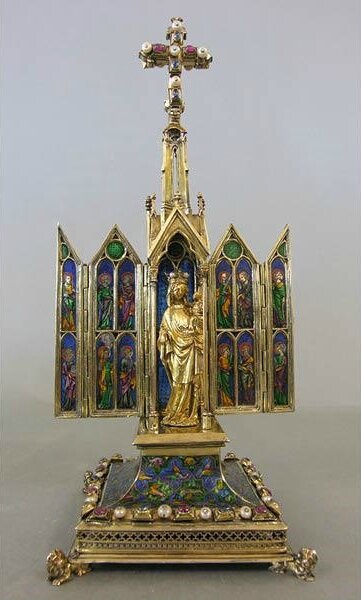 Impressive in their sheer technical wizardry, table fountains are mechanical devices with moving parts that spouted (sometimes perfumed) water, and are known especially from inventories. Once thought to have graced banqueting tables, they were more likely placed on pedestals in strategic locations in palaces, where they were exhibited as spectacles of ingenuity by their owners to delight their guests. Such objects did not originate in the European West, but were probably introduced through the Byzantine and Islamic worlds.

Conceptually and stylistically, the Cleveland table fountain is a stunning piece of Gothic architecture in miniature, with parapets, arcades, vaults, pinnacles, columns and arches with tracery. The goldsmith responsible for this object was unquestionably inspired by the great Gothic buildings of his time. The Cleveland table fountain is a three-tiered assembly featuring cast and chased elements to which were attached a series of enamel plaques representing grotesque figures, some of which play musical instruments. Water wheels and bells were added to capture motion and sound. The rich detail and ornamentation of this object suggest it would have been expensive to produce and highly treasured by its original owner.

Cleveland’s table fountain is datable to about 1320–40, and was likely produced in Paris for a person of high status, perhaps a member of the royal court. It is internationally recognized as a unique example of a genre now understood primarily through documentary sources. These fountains existed in the 14th and 15th centuries in substantial numbers. They assumed various forms but were always made from precious metals and sometimes embellished with colorful enamels or semiprecious stones. Table fountains were probably returned to the goldsmith’s shop for conversion into vessels or coinage once they ceased to function or the fashion had passed, accounting for the scarcity of surviving examples today.