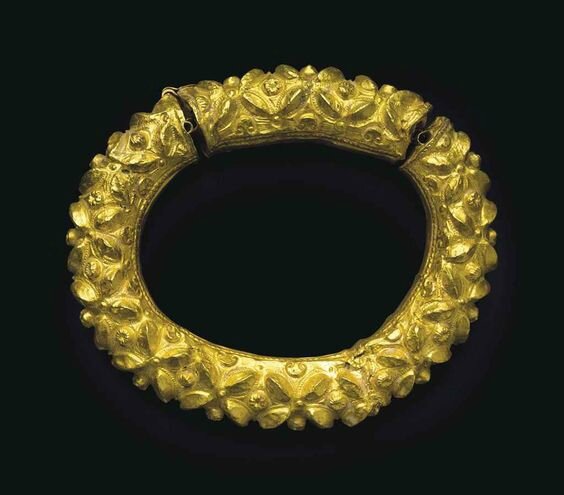 Notes: This substantial gold circular armlet is formed in two sections, with the smaller part hinged to the larger and originally secured by pins. The sheet gold is worked in repoussé along its length with additional details enhanced by chasing. The elaborate decorative scheme is composed of a continuous pattern of overlapping circles enclosing high relief quatrefoils. This floral backdrop is punctuated at the circumference with different theater masks, each one centered within a quatrefoil. The edges framing the smooth interior have pelta shields within the outer splaying petals of the quatrefoils.

Related armlets and bracelets with floral quatrefoils along their lengths have been found across a wide expanse of the Roman Empire, East and West, including Alexandria, Bonn and Monaco. The late 3rd-early 4th century A.D. date is secure, since several examples have been found with coins of Diocletian, Constantius II and Magnentius. None of the comparable works are embellished as richly as the example presented here, which is a masterpiece of late Roman jewelers' art (see A. Gosnova and C. Kondoleon, op.cit., pp. 58-59).