LONDON.- The most significant sale of its kind to be held in a generation, “China in Print and on Paper” reveals the rich history of cartography, exploration, trade and diplomacy between China and the West for over half a millennium. Together, the books, maps, photographs and works on paper reveal different aspects of China, from those who lived within its borders and those from outside.

At the heart of this sale are two magnificent single-owner collections formed over many years by private collectors Bernard Hanotiau in Belgium, and Floyd Sully in Canada. The sale will be held at Sotheby’s London on 7 November 2016 during the annual Asian Art in London, and will be preceded by a public exhibition from 3-7 November.

Bernard Hanotiau
The Library of Belgian collector Bernard Hanotiau tells the story of over 500 years of Western travellers in China through works including the the first edition of Marco Polo’s travels in French from 1556 (lot 146), the first European Atlas of China from 1655 (lot 15), photographs by one of the first people to publish his photographs of the people and landscapes of China, John Thomson (lot 170), and photographs of Beijing taken in the 1870s by Thomas Child (lot 122). Notes: THE RARE FIRST FRENCH EDITION. "MARCO POLO WAS THE FIRST TO GIVE ANYTHING APPROACHING A CORRECT AND DETAILED ACCOUNT OF CHINA AND THE FAR EAST, and the accuracy of his geographical knowledge is indicated in the correct placing of Far Eastern countries in the fourteenth-century Portolani (manuscript charts), which are clearly based on his book." Marco Polo was a member of a prosperous Venetian mercantile family, who "set out with his father and uncle in 1271 on a journey to the East. Starting from Acre the party travelled through Persia and the upper Oxus to the Pamir plateau, and then through Mongolia and the Gobi desert to the extreme north-west of China, reaching Shantung in 1275. Here they sojourned at the court of Kublai Khan until 1292, finally arriving back in Venice, after travelling through south-east Asia and southern India in 1295. During his stay in China, Marco Polo took an active part in the administration of the country and travelled widely in the Great Khan's service. He saw (or obtained knowledge of) large parts of China, northern Burma, Tibet, Japan, south-east Asia, the East Indies, Ceylon, southern India, Abyssinia, Zanzibar and Madagascar, Siberia and the Arctic" (PMM 39).

The translation by François Guget appears to be based on the Latin version in Novs orbis regionum (1532). This edition was evidently shared and simultaneously issued with a variant title and end leaf by several booksellers: Jehan Longis (as here), Estienne Groulleau, who may have been the printer, and Vincent Sertenas, in whose name the privilege was granted. 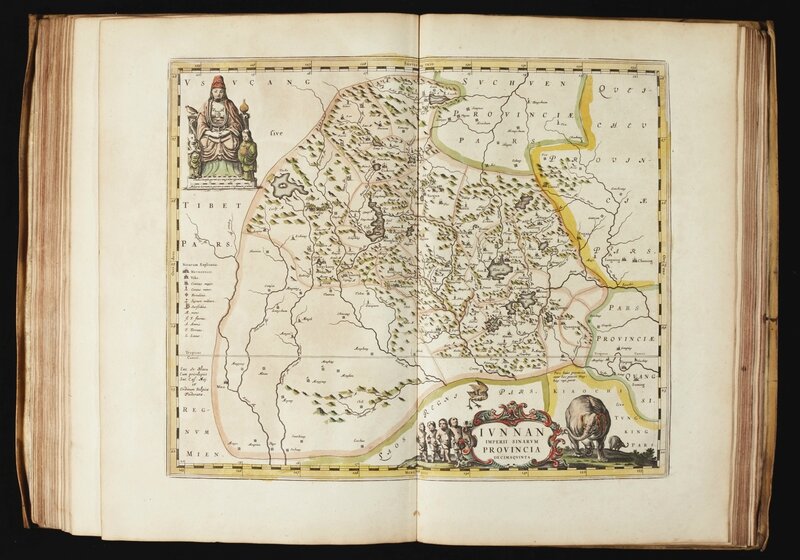 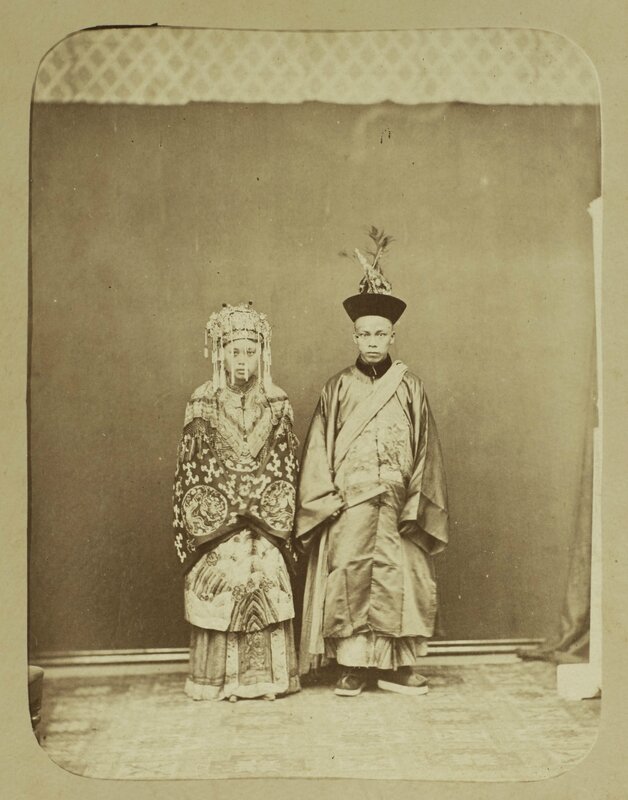 4to (305 x 254mm.), 80 ALBUMEN PRINTS (mostly 210 x 275mm., or the reverse), comprising 74 Chinese views and subjects and 6 of Japan (5 hand-tinted), by various photographers including Thomas Child, William Saunders, H.C. Cammidge and others, mounted recto and verso on card mounts, each captioned on the mount in black ink in French, contemporary red cloth, upper cover with pictorial design in black and gilt and titled "Album", flat spine with label "Chine photos 1860-1875", some chipping and loss to edges of brittle mounts, binding rubbed, neatly rebacked

In over 180 lots of rare books, atlases, and early photographs, the Hanotiau library reveals the rich history of exploration and cultural and political exchange between China and the West from the fifteenth to twentieth century. These works, created by merchants, missionaries, adventurers, and diplomats, contain a wealth of knowledge that informed the West’s understanding of China, its people, culture and geography. Many of these books have distinguished histories, having once been owned by notable figures, who include Tsar Nicholas I, Marie Louise, Duchess of Parma (wife of Napoleon), Madame de Maintenon (wife of Louis XIV), Madame Victoire de France (daughter of Louis XV), and Charles Marie de La Condamine (the first French scientist to map the Amazon).

Noted for their superb condition and splendid bindings, many of these books describe fascinating accounts of adventurers and diplomats including Robert Fortune, one of the nineteenth century’s greatest plant hunters, sent by the Royal Horticultural Society to secretly collect plants and seeds of the tea-shrub in China in 1848 (lot 52); and Sir Henry Ellis, who was part of the embassy George III sent to China in 1816 that failed after a diplomatic failure when members of the British party refused to “kow-tow” at the presentation to the Emperor (lot 49). 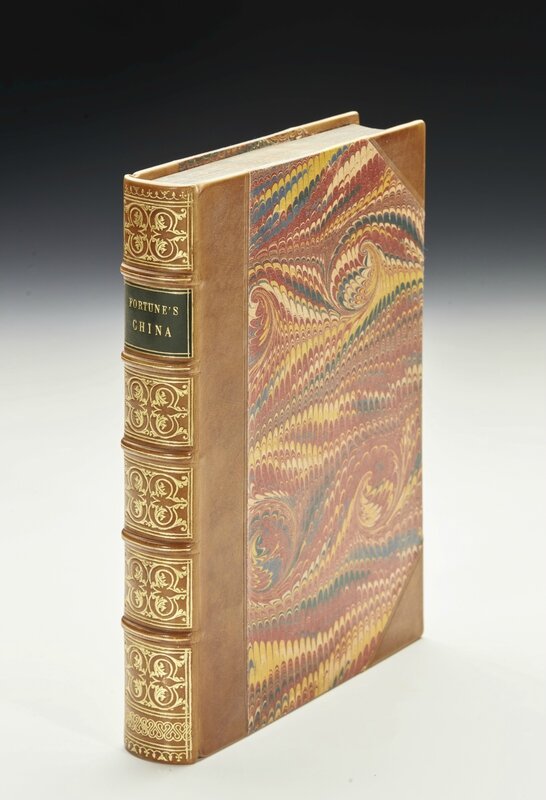 Lot 52. Robert Fortune, A JOURNEY TO THE TEA COUNTRIES OF CHINA; INCLUDING SUNG-LO AND THE BOHEA HILLS; WITH A SHORT NOTICE OF THE EAST INDIA COMPANY'S TEA PLANTATIONS IN THE HIMALAYA MOUNTAINS. London: John Murray, 1852. Estimate 400 — 600 GBP. Photo: Sotheby's. 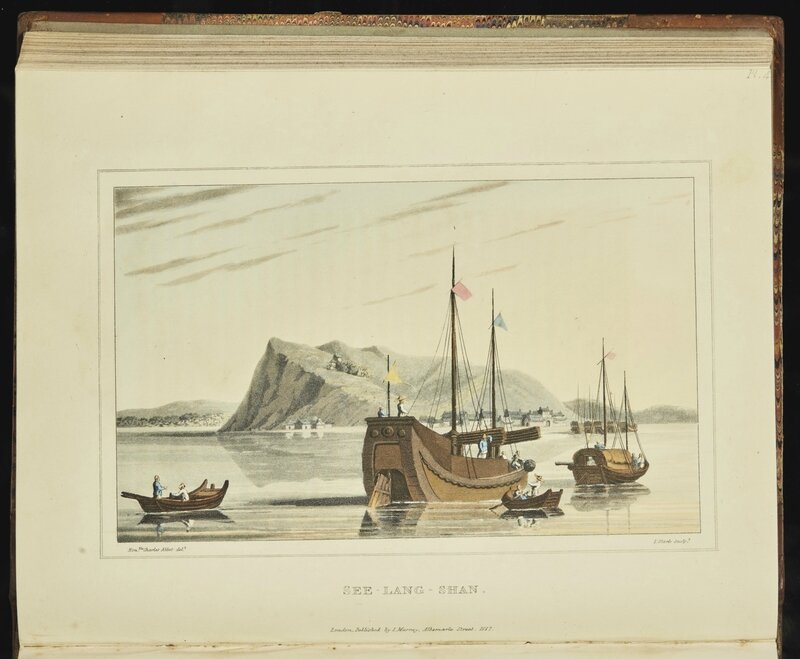 Lot 49. Sir Henry Ellis, JOURNAL OF THE PROCEEDINGS OF THE LATE EMBASSY TO CHINA; COMPRISING A CORRECT NARRATIVE OF THE PUBLIC TRANSACTIONS OF THE EMBASSY, OF THE VOYAGE TO AND FROM CHINA, AND OF THE JOURNEY FROM THE MOUTH OF THE PEI-HOTO THE RETURN TO CANTON. London: John Murray, 1817. Estimate 400 — 600 GBP. Photo: Sotheby's.

Floyd Sully
The Canadian collector Floyd Sully has long been fascinated by depictions of China in maps and drawings. His collection, comprising over fifty lots of rare maps, photographs, illustrated texts, drawings and watercolours, is a rich collection of works, many of which were created in China. They provide a fascinating insight into China’s history, its changing borders and rulers, and help to illustrate the emergence of modern China.

Star lots include the hugely impressive “Blue Map”. Measuring over 1.3 by 2.5m, is the first of its kind to come to auction in many years. Created during the Qing dynasty, this painstakingly detailed portrayal of the Chinese world provides a wealth of information about the vastness of China’s territory and administrative changes. Est. £80,000-120,000 (lot 212). Another highlight is the magnificent and rare, richly hand-coloured Daoist illuminated manuscript, commissioned by a Chinese Empress in the mid sixteenth century. Comprising 132 pages it is one of a set of five scriptures that purport to record a revelation by the legendary Daoist Laozi to Zhang Daoling (2nd century), considered by many to be the founder of religious Daoism. Est. £20,000-30,000 (lot 226). "The Blue Map". A fine example of this impressive and rare map produced during the Qing dynasty.

The inscription immediately below the title provides an array of information about the vastness of China's territory and administrative changes that the Qing court had implemented, while also dating the map's design to the third year of the Daoguang reign (1823). The inscription also mentions that this is a revised edition of a map that Huang Qianren (1694-1771) created in 1767. That map was itself based on the work of Huang Qianren's grandfather, Huang Zongxi (1610-1695). The fact that the inscription mentions the younger Huang, is likely to underline a proud family tradition of illustrious scholarly achievement. The text glorifies Manchu imperial expansion while offering an assurance that the map is completely updated. The map shows the addition of territories such as Tibet and Xinjiang, underlining the continuous strengthening of the Chinese state.

This map offers a detailed portrayal of the Chinese world: the seas surrounding China no longer contain mythological areas and European states. Lands such as the Korean peninsula, the Japanese archipelago, Taiwan and other coastal islands are reasonably rendered. A long text accompanies the foreign territories, explaining their history of political relations with the Qing. The map pays great attention to the diversity of the country of China, showing its grand nature of mountains and rivers. It also identifies provinces, prefectures, districts, and other administrative divisions by enclosing their names in squares and other shapes whose functions are interpreted in the introductory text.

"Two prominent visual features of this map do align well with the claims of China's greatness that maps of this genre tend to assert. The massive scale of this eight-part map, which fills the viewer's field of view, lends grandiosity to its subject. Moreover, the work's palette dramatically imbues its subject with antique culture, for the deep blue and green colours recall the opaque mineral pigments of the venerable blue-and-green style of painting that the aristocrats Li Sixun (651-716) and Li Zhaodao (c.675-741) popularized at the imperial court of the Tang dynasty (618-907)" (All Under Heaven). Lot 226. Daoist Manuscript 太上玄靈北斗延生本命真經. TAISHANG XUANLING BEIDOU YANSHENG BENMING ZHENJING. [THE AUTHENTIC SCRIPTURE OF THE NATAL DESTINY OF THE NORTHERN DIPPER FOR EXTENDING LIFE [AS REVEALED BY] THE MYSTERIOUS SPIRIT OF THE MOST HIGH]. [China, 1543 or later?]. Estimate 20,000 — 30,000 GBP. Photo: Sotheby's.

Literature: All Under Heaven 26

Property of a European Private Collector
Taken by Georges Morache, a French military doctor residing in Beijing from 1862-1866, these are among the earliest photographs showing the inhabitants of Beijing. Neither commercial photographs nor foreign merchants were able to operate in Beijing until the late nineteenth-century, so the only early surviving images of the city were taken by visiting professionals or amateur enthusiasts attached to the diplomatic corps at the foreign legations. As medical officer attached to the French Legation in Beijing, Morache would have had privileged access to scenes and locations little-known to those just passing through the capital. Of unusual authenticity, these remarkable images show busy street scenes, buildings and monuments of Beijing, and portraits of its inhabitants, including monks, a school teacher, chess players, musicians, and road menders. This is one of only four known sets of Morache’s photographs of Beijing to have survived. Est £50,000-80,000 (lot 257).