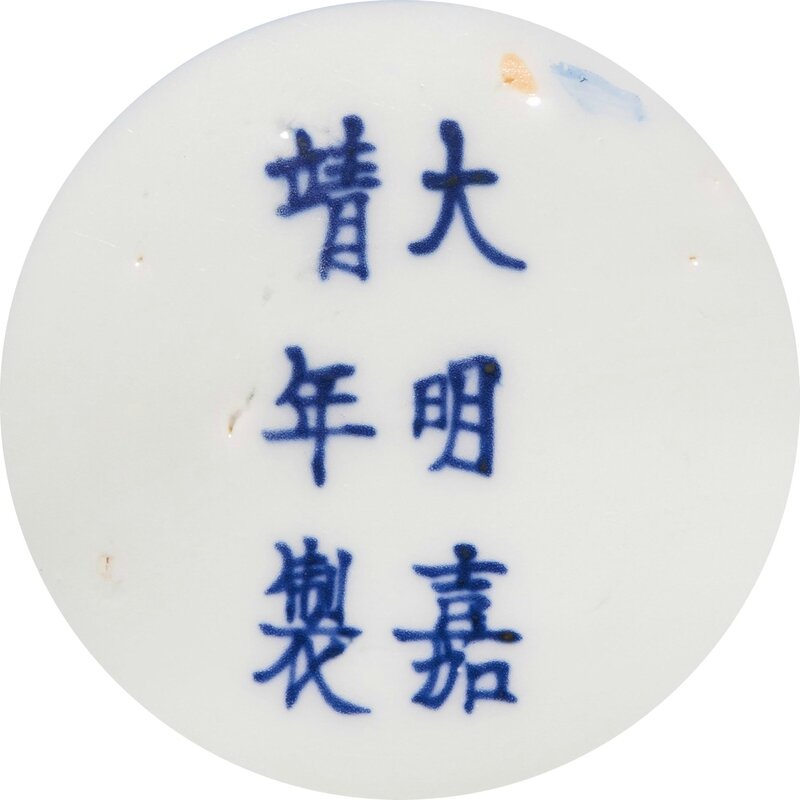 the deep rounded sides rising from a short straight foot to an everted rim, painted to the interior with a medallion enclosing an iron-red dragon chasing a flaming pearl above rich cobalt-blue foaming waves, the exterior with eight similar dragons chasing flaming pearls amidst ruyi clouds and fire scrolls and above foaming waves, the base inscribed in underglaze-blue with the six-character mark within a double circle.

Notes: The dynamic motif of scaly five-clawed dragons in iron red above turbulent cobalt waves can be traced back to the early 15th century, as seen on a Xuande mark and period bowl, in the Palace Museum, Beijing, illustrated in The Complete Collection of Treasures of the Palace Museum. Blue and White Porcelain with Underglaze Red (I), Shanghai, 2000, pl. 230.

A closely related bowl, in the Palace Museum, Beijing, is illustrated in The Complete Collection of Treasures of the Palace Museum. Blue and White Porcelain with Underglaze Red (II), Shanghai, 2000, pl. 228; one in the National Palace Museum, Taipei, is published in Porcelain of the National Palace Museum. Enamelled Ware of the Ming Dynasty, Hong Kong, 1966, pl. 8; another in the Shanghai Museum, is illustrated in Lu Minghua, Mingdai guanyao ciqi [Ming imperial porcelain], Shanghai, 2007, pl. 1-61; and a fourth bowl is published in J. Ayers, Chinese Ceramics. The Koger Collection, London, 1985, pl. 80. Further similar bowls have been sold at auction; two were sold in these rooms, the first, 14th April 1970, lot 91, and the second, 8th June 1993, lot 57; and another from the collection of the Saint Louis Art Museum, Saint Louis, was sold at Christie’s New York, 30th March 2005, lot 336.