the rounded sides deftly carved in various levels of relief with five dragons and three chilong, writhing amongst scrolling clouds, the stone of a mottled deep-green tone with black and russet-tinged inclusions skillfully incorporated into the carving, gilt-bronze stand. Quantité: 2 - 18.5 cm, 7 1/4  in.

Notes: This alms bowl is notable for the rich and dynamic design of ferocious dragons and animated chilong amongst swirling clouds – a subject much treasured by the Qianlong Emperor. The dragons are rendered with ferocious expressions, gaping jaws that reveal sharp fangs, bulbous eyes and flaring nostrils. Their scaly bodies appear to thrash through the clouds to create a powerful scene of intense strength and energy heightened by the sinuous bodies of the chilong. Bowls of this type appear to have been inspired by the massive black jade bowl attributed to the Yuan dynasty, modelled with an incurved rim and carved with dragons above waves, which was discovered at a Daoist temple during the Qianlong Emperor’s reign. The bowl was sent to the Imperial Court and is now housed in the Round Fort, illustrated in Zhongguo meishu quanji. Yuqi [The complete collection of Chinese art. Jade], vol. 9, Beijing, 1991, pl. 264.

An alms bowl of this type was sold in these rooms, 16th May 2012, lot 6; a slightly smaller example, attributed to the late Ming dynasty, was included in the exhibition Jade as Sculpture, Minnesota Museum of Art, Saint Paul, 1975, cat. no. 6; a slightly larger example was sold in our New York rooms, 17th/18th October 1974, lot 205; one was sold in our London rooms, 1st July 1969, lot 53; another, inscribed on the interior with a poem and dated to 1772, was sold in our Hong Kong rooms, 19th November 1985, lot 48; and a further example was sold at Christie’s London, 31st May 1965, lot 163. See also a much larger alms bowl carved with dragons among waves, in the Palace Museum, Beijing, illustrated in Zhongguo yuqi quanji[Complete collection of Chinese Jades], vol. 6, Shijiazhuang, 1993, pl. 333. the globular body rising from the rounded base, completely lacquered on the exterior over a metal core and deeply carved with five animated five-clawed dragons writhing in and out of dense swirling clouds, each dragon in a different pose reserved on finely carved clouds made of tight swirls, the bronze metal liner on the interior completely gilded, (fitted box) - 18 cm., 7 in.

Notes: The present exquisitely designed and carved alms bowl is amongst the finest Imperial lacquer wares produced during the Qianlong period. It is exceptional for the intricate and carefully layered design of five ferocious and animated dragons amongst tumultuous swirling waves - a subject matter much favoured by the Qianlong emperor himself. The dragons are rendered with ferocious expressions, gaping jaws that reveal sharp fangs, bulbous eyes and flaring nostrils. Their intricately modelled scaly bodies appear to thrash through the waves to create a powerful scene of intense strength and energy. Furthermore, the combed lines of the turbulent water provide a striking setting for the dragons. This bowl represents the work of the Lacquer Workshop of the Zaobanchu ('Imperial Palace Workshop') located in the Forbidden City. It is closely comparable with the famous alms bowl, carved with seven Buddha figures seated against similar dense wave background, illustrated in Carved Lacquer in the Palace Museum, Beijing, 1985, pls. 354-355 (fig.1). 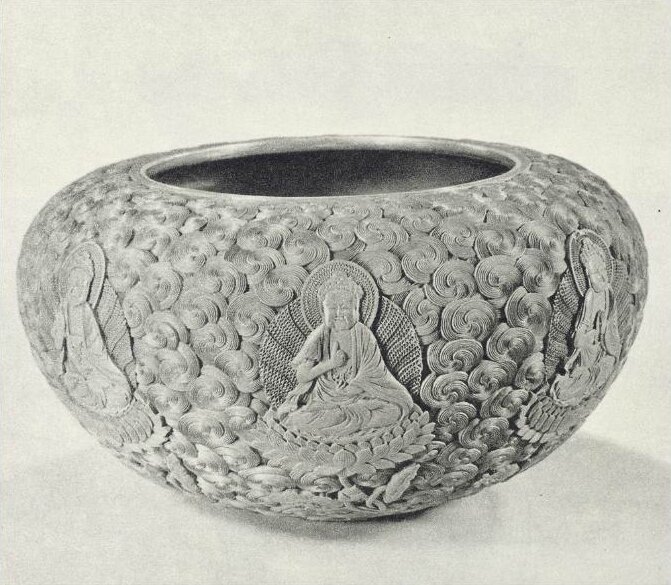 The subject matter and style of carving can be compared to that found on boxes from the Qing Court collection; for example, see a square form box in the National Palace Museum, Taipei, included in the exhibition Carving the Subtle Radiance of Colors. Treasured Lacquerware in the National Palace Museum, Taipei, 2008, cat. no. 133; another covered box, also from the court collection and still in Beijing, published in The Complete Collection of Treasures of the Palace Museum. Lacquer Wares of the Qing Dynasty, Hong Kong, 2006, pl. 9. Compare also a lacquer screen meticulously carved with the same motif on one side, from the Palace Museum, Beijing, included in the exhibition China. The Three Emperors, the Royal Academy of Arts, London, 2005, cat. no. 229; and a covered circular box sold in our New York rooms, 21st September 2006, lot 66.

The decoration is inspired by the traditional story of carp swimming upstream in the Yellow River and trying to leap the rapids of the 'Dragon's Gate.' Those which succeeded in doing so turned into a dragon. The tale came to symbolize the wish for success in passing the civil service examination and becoming a high official. The message conveyed was that with diligence and perseverance one can achieve the impossible.

For the origins of the design see a Ming dynasty jade washer carved with three dragons amid clouds and swirling waves included in the Oriental Ceramic Society exhibition Arts from the Scholar's Studio, Hong Kong, 1986, p. 122, cat. no. 89, where it is noted that the vessel is Imperial and is based on a massive wine vessel of the Yuan dynasty with the same subject matter, now in Beijing. The Yuan vessel is mentioned by contemporary writers as one of the wonders of the Mongol Court. It was rescued by the Qianlong emperor from a temple where monks used it as a vegetable container.