LONDON.- From 3 to 25 November 2016, Eskenazi will present an exhibition of 24 works of early Chinese art at their gallery at 10 Clifford Street, London. Highlighting the creative brilliance of Chinese artisans over a 2,500-year period from the late Neolithic era (circa 2000 BC) to the Tang dynasty (618 AD - 907 AD), the exhibition will include a number of highly important pieces in bronze, gold, silver, jade and bone, all sourced from private collections.

The most diverse exhibition of early Chinese art to be held at Eskenazi since 2003, it includes a core of ancient bronze vessels, artworks coveted by collectors since the advent of antiquarian scholarship in the Song Dynasty (960-1279 AD). Previous owners of works in the exhibition include renowned collectors from the 19th and 20th centuries, including Luo Zhenyu, Bernard Berenson, Adolphe Stoclet and Lord Cunliffe, with more recent prized provenances of the 21st century including the Sze Yuan Tang and the Al Thani collections. Many of the works have also been included in notable museum exhibitions throughout the 20th century, including at the British Museum and Victoria and Albert Museum in London, the Musée de l’Orangerie in Paris, the Stockholm National Museum and the Palazzo Ducale in Venice. Archaic Carved Bone Tiger. Length: 11.1cm. Late Shang dynasty, 11th century BC. ESKENAZI © 2016. With its coiled tail and long muzzle, this bone carving of a tiger was probably used as an amulet or talisman, protecting its wearer from harm and danger.

A highlight of the exhibition is a rare archaic bronze wine vessel (zun) from the early Western Zhou period (11th–10th century BC) (illustrated p.1, left) shown at a famous exhibition of Chinese art at the Palazzo Ducale in Venice in 1954. A magnificent example of a Western Zhou ritual vessel, originally placed on an altar with an ensemble of vessels of other forms, it has an illustrious provenance, already recorded in Chinese literature of the 19th century as in the collection of Pan Zuyin (1830-1890), an important official of the late Qing dynasty, who owned at least 400 archaic bronzes. The interior of this vessel is cast with a seven-character inscription. A much-published zun of identical form, with different inscription, is in the Cleveland Museum of Art. Archaic Bronze Wine Vessel (zun). Height: 25.0cm Weight: 2.75kg. Early Western Zhou period, 11th - 10th century BC. ESKENAZI © 2016. This imposing early bronze ritual wine vessel, zun, cast with birds and animal masks, has passed through the hands of several illustrious collectors and is recorded from the second half of the nineteenth century. It bears an inscription with the name of the person who ordered it to be cast, in honour of his mother.

The majority of pieces in the exhibition are decorated with animals or animal motifs, including dragons, bears, birds and other beasts, both stylized and naturalistic. Recognisably of animal inspiration, although highly stylized, are the masks and dragons that form the decoration of a different type of wine vessel (you) of the Shang or early Western Zhou period (11th century BC). Also recorded in the 19th century when owned by the scholar Luo Zhenyu (1866-1940), it was first photographed and published almost a century ago, in 1917. Further rare and striking pieces include a gilt-bronze dragon head from the Western Han period (206 BC - 9 AD), recently on loan to the British Museum, thought to have been the terminal of a central shaft of a chariot or carriage; a gilt-bronze bear inlaid with turquoise and agate stones from the Han period (206 BC – 220 AD) one of a set of supports for a bronze vessel or item of furniture; and a jade standing figure, Tang Period (618–907 AD) which was included in the landmark exhibition of ‘Chinese Jade throughout the Ages’ at the Victoria and Albert Museum in 1975. A more mysterious object in the exhibition is an archaic jade notched disc from the late Neolithic or Shang period (2000–1500 BC), measuring 33cm in diameter. Remarkable for its very large size, this and smaller similar discs have prompted much speculation as to their function although no consensus has yet been reached. Gilt-bronze Dragon Head Terminal. Length: 24.5cm. Western Han period, 206 BC - 9 AD. ESKENAZI © 2016. Made of cast bronze and gilded, this magnificent dragon-head finial, probably a fitting for the end of a chariot shaft, embodies a strength and vitality commensurate with the animal’s position in Chinese culture and cosmology. Gilt-bronze, Agate and Turquoise Bear Height: 10.6cm. Han period, 206 BC - 220 AD. ESKENAZI © 2016. Bears were revered in China for their strength and protective powers, and as such, were the natural choice as supports, for instance as the feet of vessels, trays and even at the bases of pillars. This autumn, Eskenazi will also hold the first European exhibition dedicated solely to the work of celebrated contemporary Chinese ink painter Zeng Xiaojun (b.1954) (details available on request). Opening on 5 October, it will then run concurrently with the exhibition of Early Chinese Art until 25 November, coinciding with the 19th Asian Art in London (3 to 12 November), the annual event that unites London’s Asian art dealers, major auction houses and societies in a series of selling exhibitions, auctions, receptions and seminars. Jade Standing Figure. Height: 5.9cm. Tang period, 618 - 907. ESKENAZI © 2016. Wearing an unusual headdress that is bound at the forehead and secured with ribbons at the back, this jade figure clearly represents a non-Chinese, possibly a Tocharian from Central Asia, reflecting the cosmopolitan nature of society during the Tang period. Bronze and Gold Sword; Length: 45.0cm. Eastern Zhou period, 4th - 3rd century BC. ESKENAZI © 2016. During the Eastern Zhou period, bronze weapons technology reached new heights in China, with some of the finest swords being produced in Southern China in the states of Wu and Yue. This bronze example, lavishly inlaid in gold, was probably intended for ceremonial or display purposes. 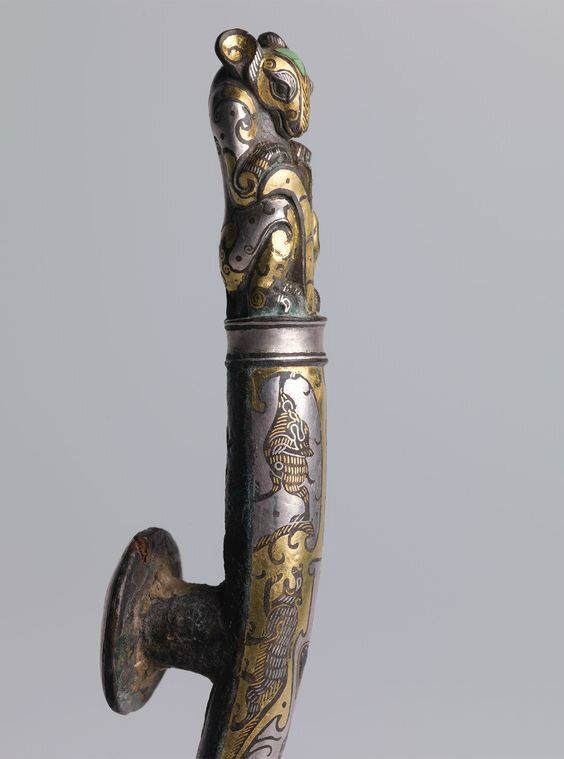 Bronze, Gold, Silver and Turquoise Garment-hook. Length: 15.1cm. Late Eastern Zhou to early Western Han period, 3rd - 2nd century BC. ESKENAZI © 2016. This bronze garment-hook, richly embellished with gold, silver and turquoise inlay, would have been a luxury item and a signifier of status when worn.