A pair of very rare yellow-glazed incised 'dragon' dishes, Yongzheng six-character marks and of the period (1723-1735)

A pair of very rare yellow-glazed incised 'dragon' dishes, Yongzheng six-character marks and of the period (1723-1735) 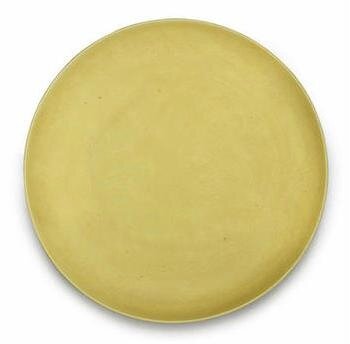 Each well potted with shallow curved sides, the well intricately incised with two leaping five-clawed dragons chasing a flaming pearl amidst billowing clouds and fire scrolls, encircled around the cavetto with eight flowers of the seasons including lotus, peony, hibiscus, rose, camellia, chrysanthemum, plum blossom and cherry blossom, the underside similarly decorated with four dragons each chasing a flaming pearl, covered in rich egg-yolk-yellow glaze stopping short of the foot ring, the white-glazed base with a six-character kaishu mark. 32.2cm (12 5/8in) and 31.8cm (12 1/2in) diam..

The design of the dishes is in direct continuation from the Kangxi reign, albeit covered with rich yellow glaze rather than the combination of yellow, green and aubergine glazes, as can be seen on a related Kangxi mark and period dish, illustrated by R.L.Hobson, The George Eumorfopolous Collection Catalogue of Chinese Ceramics and Persian Pottery and Porcelain, London, vol.V, 1927, pl.XXXVIII, no.E199.

Yongzheng period examples such as the present lot are very rare; a single similar dish is in the Victoria and Albert Museum, London, museum no.1492-1902; and compare another similar dish illustrated by A.Eggebrecht, et al., China eine Wiege der Weltkultur, Mainz, 1994, no.268. A similar yellow-glazed incised 'dragon' dish, Yongzheng mark and of the period, was sold at Christie's New York on 30 March 2005, lot 436.