A pair of rare copper-green-glazed incised floral bowls, Yongzheng six-character marks and of the period (1723-1735)

A pair of rare copper-green-glazed incised floral bowls, Yongzheng six-character marks and of the period (1723-1735) 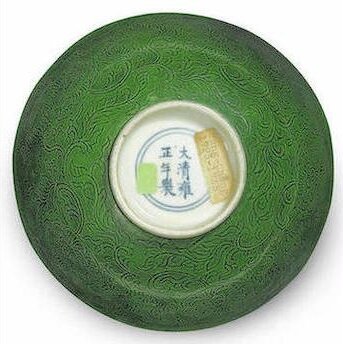 Provenance: A distinguished European private collection, and thence by descent.

The present pair of bowls is rare in their dynamic and bold design of floral blooms and feathery leaves, in comparison to the type more commonly decorated with dragon or bajixiang motifs. Compare also a related copper-green-glazed bowl, incised with lotus blossoms and similar leafy fronds, Yongzheng mark and of the period, in the Victoria and Albert Museum, London, illustrated by R.Kerr, Chinese Ceramics: Porcelain of the Qing Dynasty 1644-1911, London, 1998, p.90, no.65.