Exhibition at the Prado combines drawings, paintings and prints by José de Ribera

Exhibition at the Prado combines drawings, paintings and prints by José de Ribera 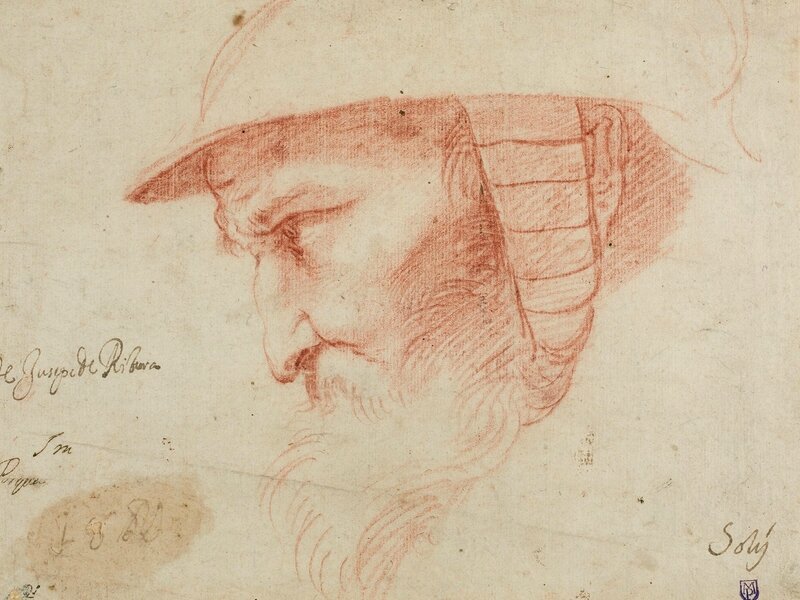 MADRID.- The Museo del Prado is inaugurating Ribera. Master of Drawing, an exhibition co-organised with the Meadows Museum, which will be presented in Dallas from March next year in a reflection of this outstanding and highly productive collaboration between the two museums.

Curated by Gabriele Finaldi (former Associate Director of Conservation and Research at the Museo del Prado and now Director of the National Gallery in London), the exhibition has been organised to mark the publication of the first catalogue raisonné of the artist’s drawings. The aim of this publication is to offer a complete vision of Ribera as a draughtsman and to catalogue all the known drawings by his hand (around 160). It marks a new high point of interest in this subject, which began in the early 20th century and has been particularly intense in the last forty years. Co-published by the Museo del Prado, the Meadows Museum in Dallas and Fundación Focus, the catalogue is edited by Gabriele Finaldi who is also its co-author together with Elena Cenalmor, Curatorial Assistant to the Prado’s director of Conservation and Research, and Edward Payne, Senior Curator of Spanish Art at Auckland Castle (UK). On display in Room C of the Jerónimos Building, the exhibition combines drawings, paintings and prints organised chronologically and thematically in order to emphasise Ribera’s outstanding technical abilities in the use of pen, ink and chalk, as well as the remarkable originality of his subject matter. With this aim in mind, 52 drawings, ten paintings and eight prints are displayed, in addition to a small wax sculpture of A Soul in Hell by the artist’s father-in-law Giovan Bernardino Azzolino which can be related to Ribera’s anatomical prints.

In addition to a number of already known graphic masterpieces such as Samson and Delilah (Museo de Córdoba), Achilles among the Daughters of Lycomedes (Teylers Museum, Haarlem) and Saint Albert (British Museum, London), the exhibition includes major rediscoveries that confirm the artist’s remarkable technical abilities, such as the exquisite Risen Christ appearing to the Virgin (Kent History and Library Centre), or reflect his interest in depicting heads and scenes of daily life in Naples, such as Boy with a Pinwheel and old Man pulling a Cart with a Body, a sheet recently acquired by the Prado. Visitors will also see around a dozen drawings not previously exhibited in Spain, including the two sheets of The Adoration of the Shepherds from Berlin and New York, and Hercules resting from Malta. 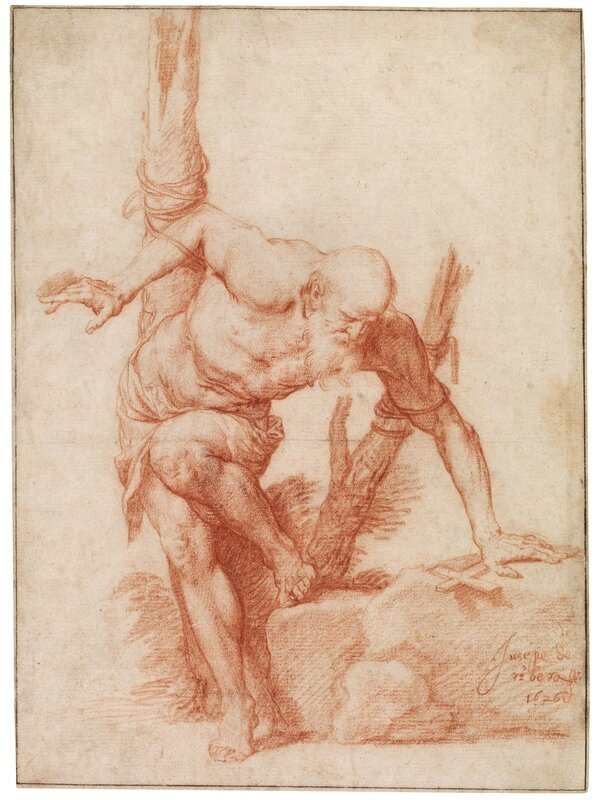 José de Ribera, "Boy with a Pinwheel and an Old Man Pulling a Cart with a Corpse on it", Early 1640´s. Pen, brown ink and brown wash; traces of black chalk added at a later date, 235 x 170 mm. Madrid, Museo Nacional del Prado

The seventy-one works in the exhibition are loaned from museums and collections around the world, including the British Museum (London), the Fitzwilliam Museum (Cambridge), the Metropolitan Museum of Art (New York), and the Istituto Centrale per la Grafica in Rome. From within Spain there are loans from the Museo de Bellas Artes de Córdoba, the Academia de San Fernando and the Calcografía Nacional. A number of sheets are from the collection of the Museo del Prado, which in recent decades has been able to build up one of the most important groups of drawings by Ribera.

A complex artist and a masterly draughtsman, José de Ribera was born in Xátiva (Valencia) in 1591, arriving in Rome in 1606 where he trained in a style that combined two seemingly opposing trends: Caravaggesque naturalism in his paintings and an academic classicism in his drawings. Ribera was principally active in Naples, where he settled in 1616 in the service of the Spanish viceroys, living there until his death in 1652. The artist’s biographers describe him as an assiduous draughtsman, which was unusual in the context of Caravaggesque painters who made little use of drawing. Almost 160 sheets by Ribera are known today, dating from around 1610-15 to the end of his life, of which only a few are preparatory studies for paintings or prints and most derive from his observation of the human figure or are the fruit of his imagination. No other Neapolitan or Spanish artist of this period employed such a wide range of subjects as Ribera, for whom the principal focus of interest in his graphic work was the human figure. Around half the known sheets are on religious subjects, while mythological themes include Apollo and Marsyas, the Laocoön and the “Furies”. Many drawings depict heads wearing different types of hats and caps, while a series of recently rediscovered sheets show scenes of everyday life observed on the streets of Naples. In five drawings of enigmatic meaning tiny men climb up a larger figure. However, the most striking aspect of Ribera’s drawn output is perhaps his interest in ugliness and violence, both in the grotesque heads and in the scenes of martyrdom and torture, with drawings of men tied to trees, hangings and beheadings, aspects that allow the artist to be seen as a forerunner of Goya. 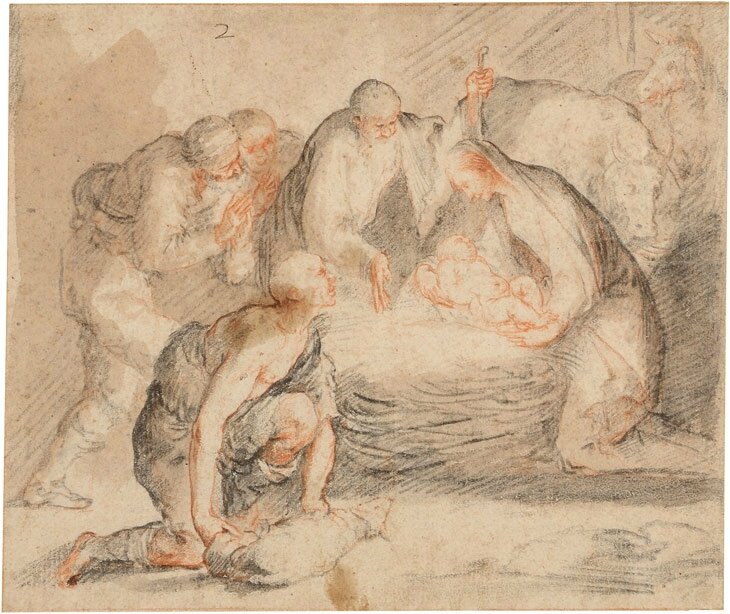 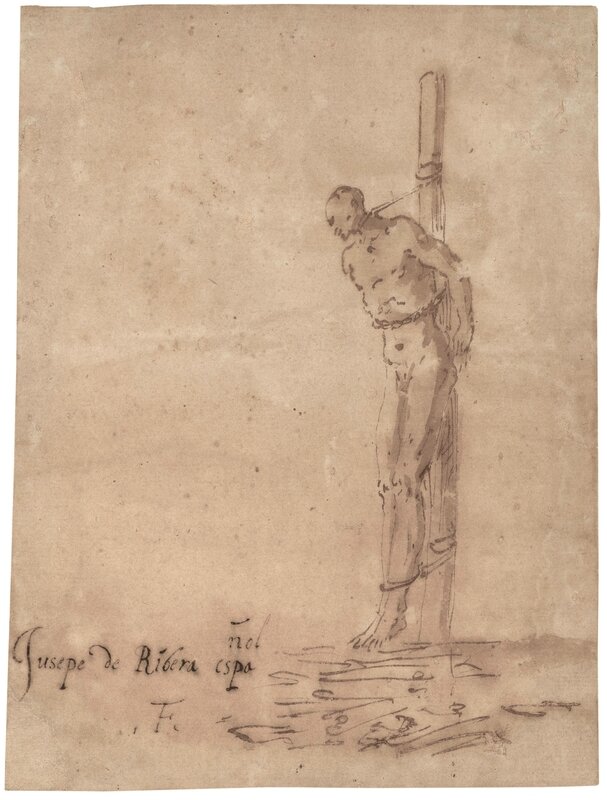