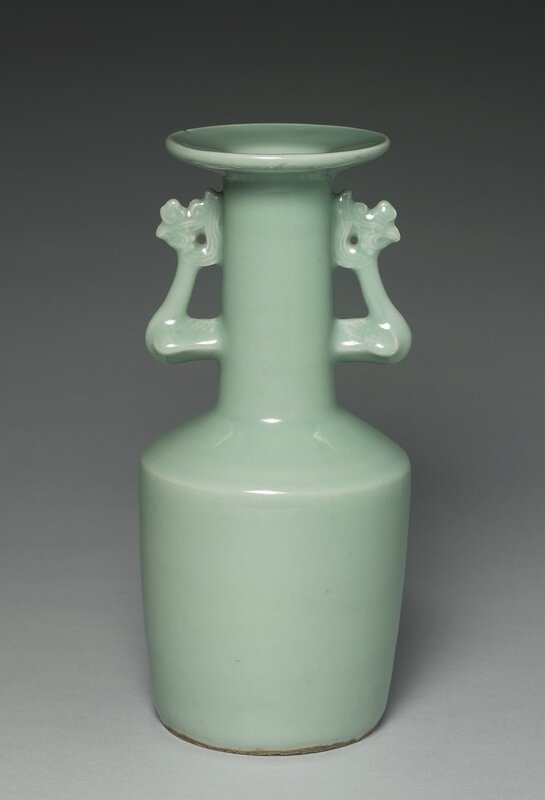 This celadon vase with phoenix ears has a long neck and cylindrical body, its rim opening outwards like a plate, decorated with phoenix-patterned ears on the sides. Neat and elegant in shape, it is a work of the Longquan ware during the Southern Song Period.

Various types of ceramic and porcelain ware were commonly used during the Southern Song Period, including celadon porcelain, white porcelain and black porcelain; porcelain from Longquan ware can be said to be the mainstream product. The Longquan ware was located in southern Zhejiang, its porcelain sales locations widely spread and its product types numerous, frequently appearing in grave burials and cellar caches from the Song and Yuan Dynasties. Longquan ware porcelain is also frequently discovered in old overseas trading sites. After Southern Song, Longquan ware also became an important kiln in supplying domestic and overseas demand for porcelain.

Vases with a long neck and plate-like rim were quite common in the Ru Kilns of Northern Song and imperial ware of Southern Song, and were a form of porcelain favored by the court. The Longquan ware tended to add fish-patterned or phoenix-patterned ears to the sides of the long neck. The surface of the phoenix ears of this celadon vase is decorated with fine patterns, and the feathers on the head and wings of the phoenix are clearly visible. The glaze is light green in color, bright and warm without any blemish. Along with two other celadon vases with phoenix ears that are now in Japanese collection and are named "A Thousand Sounds" and "Ten Thousand Sounds" by a Japanese emperor, these are some of the most beautiful and amazing works to come from the Lonquan ware.