A fine and highly important falangcai ruby-ground ‘prunus’ cup, Yongzheng four-character mark in blue enamel and of the period

A fine and highly important falangcai ruby-ground ‘prunus’ cup, Yongzheng four-character mark in blue enamel and of the period The cup is delicately enamelled to the exterior in soft tones of yellow, green and sepia to depict two bees hovering above a flowering branch bearing prunus blossoms, intertwined with clusters of bamboo around the foot, all against a vivid ruby-red ground. The interior and base are covered with a clear glaze. The countersunk base is inscribed with a Yongzheng reign mark in blue enamel. 2 ½ in. (6.3 cm.) diam., Japanese double wood boxes.

This exceptionally rare falangcai cup is both exquisitely potted and exquisitely decorated. Its shape suggests that it was created in the early part of the Yongzheng reign, since small, deep, footless, tub-shaped, cups of this form – with straight mouth rims – are more characteristic of the Kangxi reign. A Kangxi cup of similar shape and size, with a Kangxi reign mark in rouge enamel and decorated with ruyi-shaped panels reserved against a ruby ground is in the collection of the Palace Museum, Beijing (see Porcelains with Cloisonné enamel Decoration and Famille Rose Decoration, The Complete Collection of Treasure of the Palace Museum, 39, Hong Kong, 1999, p. 11, no. 9) (fig. 1). Two cups of this size and shape, both almost identically decorated with flowers against an egg-yolk yellow ground – one with a blue enamel Kangxi mark and the other with a blue enamel Yongzheng mark – are in the collections of C. P. Lin and Sir Percival David, respectively (see R. Scott, Elegant Form and Harmonious Decoration – Four Dynasties of Jingdezhen Porcelain, London, 1992, p. 119, nos. 129 and 130). The closeness of form and decoration of these two yellow-ground cups also suggests that the Yongzheng example was made in the early years of the reign – shortly after the Yongzheng Emperor succeeded his father, the Kangxi Emperor. While the majority of the small tub-shaped cups of the Yongzheng reign appear to be slightly shallower, the deeper form was revived in the Qianlong reign. Two Yongzheng falangcai cups of the deeper type, slightly larger than the current cup, but also decorated with plum blossom against a ruby ground, are in the Palace Museum, Beijing. They are both badly damaged and so are in the study collection (illustrated in the Palace Museum Research Centre, Gugong Bowuyuan cang – Gu taoci ziliao xuancui (Highlights of Ceramic Research Material in the Collection of the Gugong Museum), vol. 2, Beijing, 2005, nos. 134-135)(no. 134, fig. 2); also discussed and illustrated by Wang Jianhua, ‘Gugong Bowuyuan gu taoci ziliao yanjiu’, Gugong Bowuyuan bashi huadan, gu taoci guoji xueshu yantaohui: lunwenji (80th Anniversary of the Palace Museum, Proceedings of the International Conference on Academic Ceramic Research) Beijing, 2007, pp. 184-85). A pair of the shallower falangcaiYongzheng cups, with almost identical decoration to the current cup, are in the collection of Mr. Alan Chuang (illustrated in The Alan Chuang Collection of Chinese Porcelain, Hong Kong, 2009, pp. 278-281, no. 116). An additional motif on the current cup is the inclusion of a small spray of bamboo at the lower edge on one side. While the plum blossom symbolises beauty, the coming of spring, and represents the five blessings of longevity, health, wealth, happiness, and a peaceful death, the bamboo symbolises integrity, especially that of the scholar who will not deviate from his principles. Another charming detail of the current cup, which is not shared by the Chuang cups, is the inclusion of two well-painted bees, which hover above the blossoms on one side of the vessel (fig. 3). The word for bees or wasps in Chinese is feng, which is a homophone for feng meaning to confer (as in to confer a rank or blessing), and also feng meaning harvest – a good harvest being a constant desire. The slightly deeper sides of the current bowl allow space for this additional detail, while the shallower ones do not. 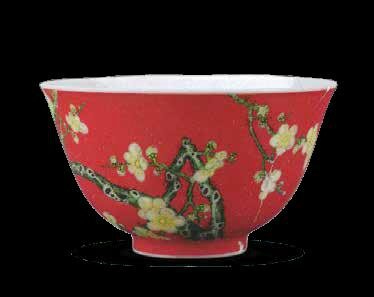 The current cup and the Chuang cups are painted in a very distinctive and elegant style with refined use of the enamel colours. The dark outlines of the individual flowers are extremely fine, so as to define the shape without detracting from the delicacy of the petals. The petals themselves are very subtly shaded with pale greenish-yellow towards the centre, and the tiny stamens of the flowers are depicted in egg-yolk yellow enamel which stands impasto on the surface. Interestingly the entire decoration is painted on the colourless glaze, which has been reserved against the ruby ground, with the exception of one detail. On both the current cup and the two Chuang cups, the lichen on the branches of the plum tree has been painted over the ruby ground. This effectively adds to its texture.

The ruby ground of these cups, which appears only to the outside of the vessels, has a soufflé-like texture and it seems likely that it has been applied by blowing the pink enamel through a tube with gauze over the end. This is a technique used for the application of so-called ‘powder-blue’, but would have required even greater breath control for the pink enamel. A ruby ground of similar colour and texture to that on the current cup can be seen on a Yongzheng four character marked bowl in the collection of the Palace Museum, Beijing (see Porcelains with Cloisonné Enamel Decoration and Famille Rose Decoration, op. cit., pp. 24-25, no. 21) (fig. 4). This bowl has three white circular panels reserved against the ruby ground and decorated with overglaze enamels, as well as scattered multi-coloured flower heads between and around the panels. 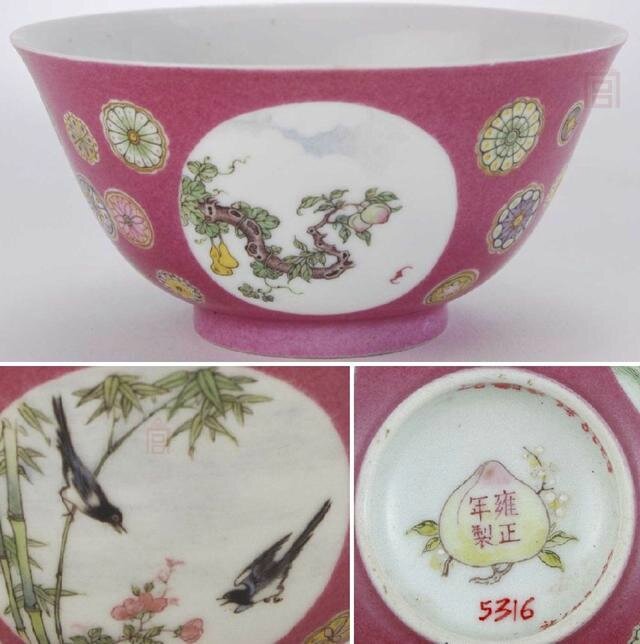 Decoration of plum blossom on a ruby ground can already be seen on vessels of the late Kangxi reign, although the blossoms are usually larger in scale than those on the current cup and the Chuang cups. A falangcai cup with a four-character Kangxi mark in pink enamel, from the Paul and Helen Bernat collection, now in the Museum of Fine Arts, Boston, is decorated with plum blossom depicted against a ruby ground (illustrated in The World’s Great Collections, Oriental Ceramics, vol. 10, Museum of Fine Arts, Boston, Tokyo, 1980, colour plate 90). A Kangxi bowl with plum blossom on a ruby ground in enamels on metal is in the collection of the British Museum (illustrated in By Imperial Command: An Introduction to Ch’ing Painted Enamels, Hong Kong, 1976, pl. 10). The current cup was formerly in one of the most prestigious Chinese private collections of the 20th century. It belonged to the Shanghainese connoisseur and collector J. M. Hu (Hu Jenmou, also known as Hu Huichun 1911-1995), who took as his studio name Zande Lou (The Studio of Transitory Pleasure). The name of his studio derived from a section of Lanting Xu (Preface to the Gathering at the Orchid Pavilion), written by the famous calligrapher Wang Xizhi in AD 353: (I am content with whatever happiness comes to me, however transitory, I am satisfied). J. M. Hu had a keen sense of the educational role of collections and an important group of ceramics from his collection was donated to the Shanghai Museum, while he also supported institutions such as the Art Gallery of the Chinese University of Hong Kong, and was a founder member of the Min Chiu Society in Hong Kong.