An extremely rare and superbly painted anhua-decorated blue and white ‘dragon’ stem bowl, Xuande mark and of the period

An extremely rare and superbly painted anhua-decorated blue and white ‘dragon’ stem bowl, Xuande mark and of the period 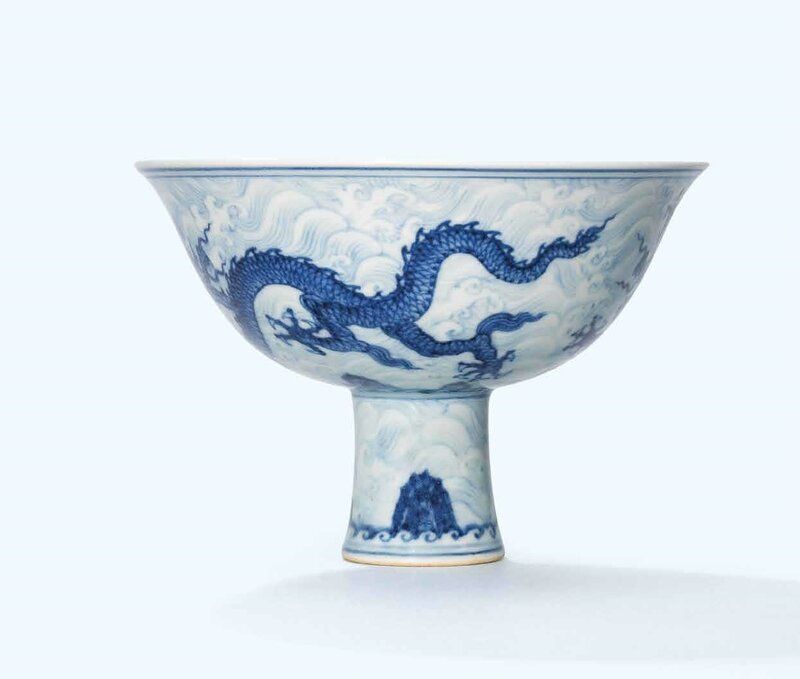 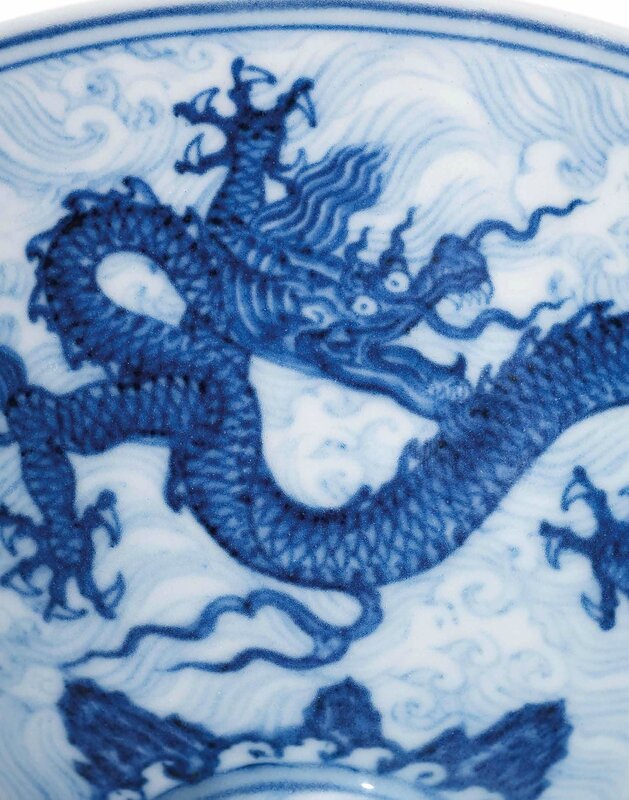 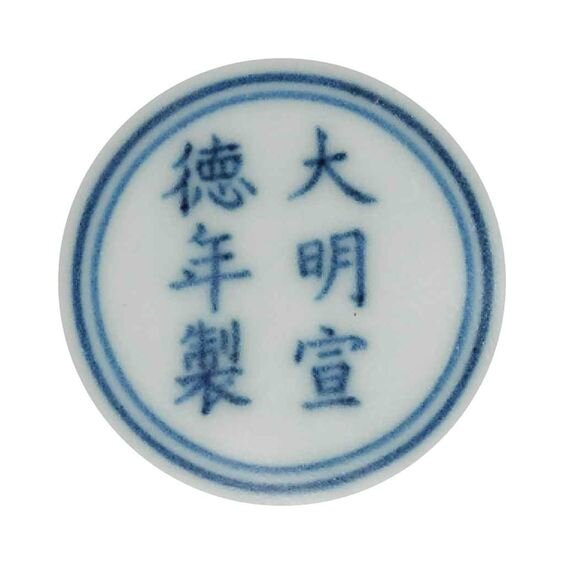 The exterior of the bowl is superbly painted in brilliant tones of cobalt blue depicting two ferocious five-clawed dragons, one charging forward, the other looking back, above four peaks at the cardinal points alternating with four lower peaks, the stem foot decorated with four further peaks rising above cresting waves, all above a delicately pencilled ground of rolling waves in softer tones of blue. The interior of the bowl is incised in anhuadecoration with two five-clawed dragons in similar poses as those on the exterior. The interior centre is inscribed with the reign mark in underglaze blue. 6 in. (15.2 cm.) diam., box

Notes: To many connoisseurs of Chinese porcelain, the blue and white wares of the early 15th century include the finest painting in underglaze blue of any era. Indeed, when writers of the later Ming and Qing dynasties heaped praise upon the wares of ‘Xuan and Cheng’, they inevitably praised the enamelled porcelains of the Chenghua reign and the blue and white wares of the Xuande period – insisting that each represented the pinnacle of achievement in the two decorative techniques. The current stem bowl belongs to a small group of vessels which exemplify the highest achievements of the Xuande ceramic decorators. These pieces bear imperial five-clawed dragons painted in particularly rich blue tones, depicted amongst turbulent waves painted in the most delicate icy blue. It may reasonably be claimed that the dragons on these vessels appear the most powerful and lively of all the dragons painted on imperial Chinese porcelain. It is no coincidence that a small Xuande dish bearing this design was chosen as the iconic piece to provide the emblem of the Percival David Foundation of Chinese Art. (The David Foundation dish is illustrated by R. Scott, Elegant Form and Harmonious Decoration – Four Dynasties of Jingdezhen Porcelain, London, 1992, p. 44, no. 32; the emblem appearing on the dust cover and half-title page of the publication.) Interestingly the current stem bowl has anhuadecoration of striding dragons on the interior sides of the bowl, surrounding the underglaze blue six-character Xuande mark. This anhua decoration is so subtle that it was missed by cataloguers when the stem bowl was sold on two previous occasions. Similar anhua dragon decoration can also be seen painted inthin slip around the cavetto of the Percival David dish.

The stem bowls with these exceptionally well-painted dragons amongst pale waves appear either with a narrow band of outlined waves around the lower edge of the foot – as in the case of the current stem bowl, or without such a wave band. A stem bowl of this design and size, with the lower wave band, is in the National Palace Museum, Taipei (illustrated in Catalogue of the Special Exhibition of Selected Hsuan-te Imperial Porcelains of the Ming Dynasty, Taipei, 1998, pp. 270-271, no. 108). Another stem bowl from this group, also with the lower wave band, is in the collection of the Palace Museum, Beijing (illustrated in Blue and White Porcelain with Underglaze Red (I), The Complete Collection of Treasures of the Palace Museum, 34, Hong Kong, 2000, p. 172, no. 163) (fig. 1). A further example with the lower wave band, from the Grandidier Collection, is in the Musee Guimet in Paris (illustrated in The World’s Great Collections, Oriental Ceramics, vol.7, Musee Guimet, Paris, Tokyo, 1981, colour plate 18) (fig. 2). A stem bowl with this design, but lacking the lower wave band, is in the Capital Museum, Beijing (illustrated by Liu Liang-yu, Ming Official Wares, Taipei, 1991, p. 99, lower image), another, also lacking the lower wave band, is illustrated by A. Joseph in Ming Porcelains, their Origins and Development, London, 1971, p. 120, no. 1, later sold by Sotheby’s in 1981 and 1986. A third was sold by Christie’s London on 1st April, 1968, lot 121, and a fourth was sold by Christie’s Hong Kong on 27th April, 1997, lot 71 (fig. 3). The latter stem bowl entered the Meiyintang Collection and was sold by Sotheby’s Hong Kong in April 2012, lot 29. fig. 1 A painted anhua-decorated blue and white ‘dragon’ stem bowl, Xuande six-character mark in underglaze blue within a double circle and of the period (1426-1435). Collection of the Palace Museum, Beijing. There are two further Xuande stem bowl designs of dragons amongst pale waves, in which either nine dragons arranged in two rows – one above the other - or five dragons – one painted on the high foot – are depicted on the exterior of the stem bowl. Examples of these variants can be found in the collection of the National Palace Museum, Taipei (illustrated in Illustrated Catalogue of Ming Dynasty Porcelain in the National Palace Museum, vol. I, Tokyo, 1977, pls. 78 and 79, respectively), and one of the five-dragon type is in the collection of the British Museum, illustrated by J. Harrison-Hall, Ceramics of the Ming in the British Museum, London, 2000, p. 129, no.4:14). However, it appears to have been the stem bowls with two dragons on the exterior – one rearing up as he lunges forward and the other turning to arch his head over his back as he changes direction, as they appear on the current stem bowl - which were the classic imperial choice.

The dragons shown in the interior centre of the related dishes are also depicted rearing up with legs and claws outstretched, while those on the exterior of the dishes follow the posture of those on the exterior of the stem bowls, but achieve less height. Dishes with this design of similar size and decoration to that in the collection of Sir Percival David are in the collection of the British Museum (illustrated by J. Harrison-Hall, op. cit., p.135, no. 4:29) and the Metropolitan Museum, New York (illustrated by S.Valenstein, A Handbook of Chinese Ceramics, Revised and enlarged edition, New York, 1989, p. 154, no. 149). The Shanghai Museum has a dish of similar size and decoration, but with a straight, as opposed to an everted, mouth rim (illustrated by Wang Qingzheng, Underglaze Blue and Red – Elegant Decoration on Porcelain of Yuan, Ming and Qing, Hong Kong, 1993, no.72), while a slightly smaller straight-rimmed dish of this design is in the collection of the National Palace Museum, Taipei (illustrated in Catalogue of the Special Exhibition of Selected Hsuan-te Imperial Porcelains of the Ming Dynasty, Taipei, 1998, p. 428-429, no. 187). The British Museum also has on loan from the Ma Foundation a smaller dish of this design with everted rim, formerly in the collection of E. T. Chow.

What is particularly striking about the current Xuande stem bowl, and the small number of related vessels, is the quality of the painting. The dragons are painted in a carefully manipulated dark blue tones with meticulous detailing of the dragons’ scales, their heads, and their feet and claws. Their poses have a rampant power and sense of movement that is unmatched on any other porcelains. Equally impressive is the painting of the turbulent waves. These are depicted using the palest blue – very finely prepared cobalt, sparingly, but homogeneously mixed to give an even colour. The breaking waves are often reserved to show the white porcelain, while the movement of the water is depicted in fine undulating lines of pale blue. The contrast between the rich, jewel-like tones of the dragon and the pale blue of the water adds to the drama of the composition. While less immediately apparent, it is worthwhile noting the form of the current stem bowl, which has the fine potting, elegant proportions and perfectly balanced profile of the finest porcelains from the Xuande reign.

It is believed that stem bowls of this kind were made for use on sacrificial altars, and as such would have been especially treasured and carefully stored when they were not in use. Given their fine quality and decorative theme, it seems clear that they were made for the personal use of the emperor. The five-clawed dragon was the symbol of the emperor, who was regarded as the Son of Heaven. The emperor himself was responsible for the sacrifices to ensure a good harvest for the benefit of his people. The event to which the design on this stem bowl refers is the dragon rising from hibernation amongst the waves at the Spring equinox in order to bring rain to water the crops, so that they will flourish and feed the population of the empire. The supremely powerful imperial dragons on this vessel appear more than ready to undertake that task.