Each vase is of peach shape with a gilt flat back, decorated in brightly coloured enamels with leafy branches bearing blossoming peach flowers, on a graduating pistachio-green, white, pink and red ground, superimposed with lines of gilt poetic inscriptions, one written in lishu script and the other in zhuanshu script. Both poems are surmounted by the characters Yuzhi. 5 1/4 in. (13.3 cm.) wide

Notes: This pair of unusual peach-shaped wall vases may have been intended for use in a room, but may also have been intended for the inside of a carriage or sedan chair. Wall vases were popular in a number of different materials in the Qianlong reign, and pairs of porcelain wall vases are known to have been commissioned in 1742 to bear imperial inscriptions stating that they were for use in an imperial sedan chair. An example of such a porcelain sedan-chair vase is preserved in the Percival David Foundation, illustrated and discussed by Rosemary Scott in For the Imperial Court - Qing Porcelain from the Percival David Foundation of Chinese Art, New York, 1997, pp. 18-19 and 52-3, no. 3.

This attractive pair of cloisonne enamel peach-shaped wall vases, is very rare, not only in their form, but also for the fact that they bear inscriptions forming part of the design, and the two characters Yu zhi which indicate imperial manufacture. The choice of peaches with branches and leaves was a popular one in many media, since the peach was a symbol of longevity, and two peaches thus symbolised doubled longevity. As such this vase would have been an ideal gift on the occasion of an imperial birthday.

A number of peach-form works of art are to be found among enamelled metal objects in the 18th century, although wall vases are rare. One close comparison is known, which is a cloisonné enamel double-peach wall vase also bearing imperial inscriptions and Yuzhi marks, from the Harold A. Hartog Collection and sold at Christie's London, 13 May 2008, lot 50. A cloisonné double-peach shaped box with flowering peach branch, dating to the second half 18th century is illustrated by H. Brinker and A. Lutz, in Chinese Cloisonné - The Pierre Uldry Collection, New York, 1989, no. 302. A double-peach shaped jardiniere with pomegranate and lingzhi applique is in the Robert Chang Collection (illustrated in Colorful, Elegant, and Exquisite - A Special Exhibition of Imperial Enamel Ware from Mr. Robert Chang's Collection , Suzhou, 2008, p. 122). 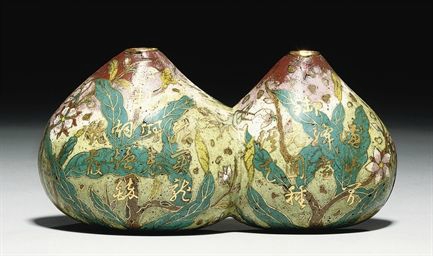 Shaped as a slightly larger peach joined to a smaller one and of bulbous form with a flat back, decorated in brightly coloured enamels with leafy lotus branches on a graduating pistachio-green, white, pink and red ground, superimposed with lines of gilt poetic inscriptions in cursive script - 7 3/8 in. (18.7 cm.) wide

A Yongzheng-marked painted enamel peach-shaped water pot with a smaller peach on the side, and its twig curled under it to form the base, plus two red bats painted on the large peach, is in the collection of the Palace Museum, Beijing, illustrated in Metal-bodied Enamel Ware, The Complete Collection of Treasures of the Palace Museum, Hong Kong, 2002, p. 203, no. 194. This water pot, which is from the Qing Court Collection, has leaves curled up the sides of the peach in the same manner as can be seen on the current wall vases.