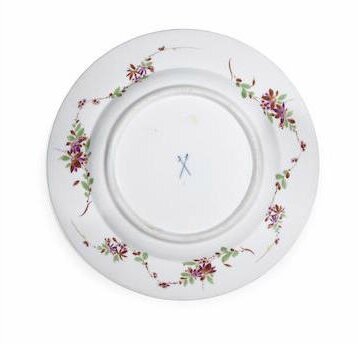 Notes: Six similar circular stands, formerly in the collection of Franz and Margarete Oppenheimer, Berlin - which was acquired in the late 1930s by the Amsterdam-based collector, Fritz Mannheimer - were sold in 1977 from the Maurice de Rothschild Collection (Christie's London, 28 March 1977, lots 22 and 23; 17 October 1977, lots 8 and 9).

Professor Dr. Ludwig Darmstädter (1846-1927) was one of the earliest and most discerning collectors of 18th century German porcelain. His collection was considered one of the finest and most important of the pre-War period.