A fine and rare Ming blue and white 'dragon' dish, Zhengde four-character mark within double-circles and of the period (1506-152

A fine and rare Ming blue and white 'dragon' dish, Zhengde four-character mark within double-circles and of the period (1506-152 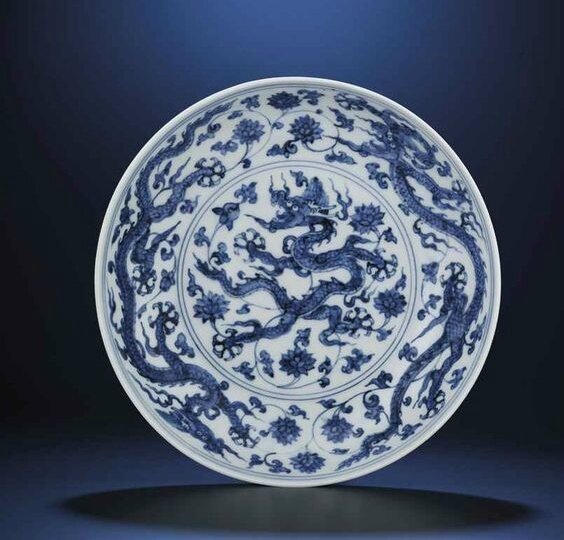 Finely potted with rounded sides and painted in vibrant inky-blue tones in the centre with a sinuous five-clawed dragon amidst a dense lotus meander, surrounded by two further dragons striding around the cavetto, repeated around the exterior above a ruyi band encircling the slightly tapered foot, all within double-line borders - 8 3/8 in. (21.3 cm.) diam.

Notes: Both four and six-character marks were used on Imperial Zhengde porcelains, but it is not clear what the difference between the two types was. Examples similar to the present dish were invariably inscribed with four-character reign marks. Its imperial provenance is further substantiated by the inclusion of a dish of this design on the sixth scroll of the Imperial collection of Yongzheng, the Guwan Tu, Scroll of Antiquities, dated to the sixth year of his reign (1728), and now housed in the British Museum.

A Zhengde dish of similar design but slightly smaller in size in the Palace Museum, Beijing is illustrated in Blue and White Porcelain with Underglazed Red (II), The Complete Collection of Treasures of the Palace Museum, Hong Kong, 2000, p. 68, pl. 63. Another similar Zhengde-marked dish is in the Shanghai Museum, published in Wang Qingzheng, Underglaze Blue and Red, Hong Kong, 1993, pl. 116.

Commentaires sur A fine and rare Ming blue and white 'dragon' dish, Zhengde four-character mark within double-circles and of the period (1506-152