Perfection in Details. The Art of Japan in the Meiji Period (1868-1912) at the State Hermitage Museum

Perfection in Details. The Art of Japan in the Meiji Period (1868-1912) at the State Hermitage Museum 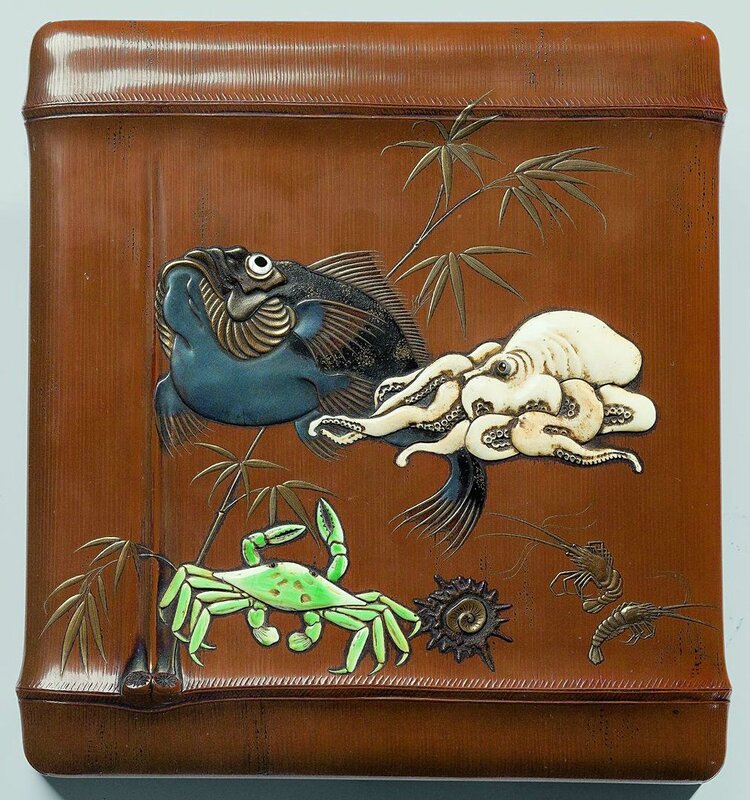 SAINT PETERSBURG - Around 700 first-rate exhibits – ceramics and metalwork finished in a variety of techniques, articles decorated with enamel and lacquer show visitors the beauty of the work of Japanese craftsmen.

The second half of the 19th century was an exceptional time for Japan. The country abandoned its policy of self-isolation and began to change at a rapid pace, pursuing a course of modernization and “westernization” in all aspects of life. International treaties were concluded with several states regulating legal and commercial relations; the political system was reformed; large commercial enterprises were created; culture and art began to receive government support. The young Emperor Mutsuhito (1851–1912) came to power. His motto, and posthumous name, was the term Meiji (“enlightened rule”), reflecting an intention to create a new, modern Japan. By the end of the century, all-embracing reforms enabled the Land of the Rising Sun to occupy a worthy place among the leading nations of the world. In the exhibition, metalwork is represented by the creations of the court craftsmen Kano Natsuo, Suzuki Chokichi, Hiratsuka Mohei and Komai Otojirō. These are pieces made from various alloys decorated in the techniques of gold and silver hatching and inlay, quite often covered with patinas in several shades. The painstaking finishing of such articles was compared to the weaving of brocade: the extremely fine details need to be carefully viewed, at times with magnification, to appreciate the quality of the workmanship. The exhibition includes some unique works of Japanese plastic art in metal: a pair of gilded vases by the master craftsman Mitsumine which have no known parallels in other collections. 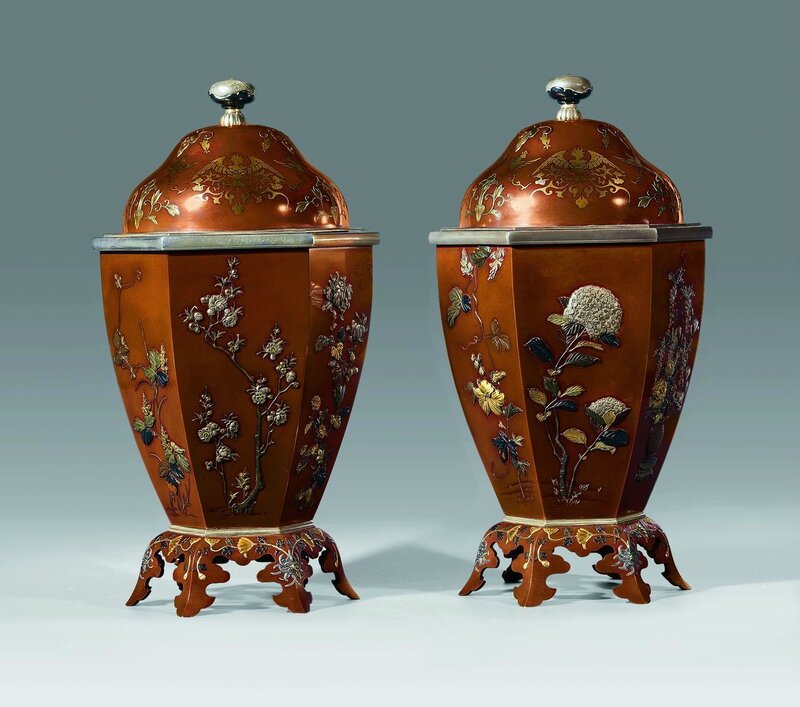 The field of applied art most fully reflected in the exhibition is enamelware. The time span here is fairly broad, covering a period from the early experimental attempts at enamelling to the 1910s, when the technique for decorating objects had been elevated to perfection. Vases and vessels embellished with transparent, translucent or opaque enamel, over a single-coloured, sometimes contrasting black mirrored ground, with transitions from one shade of colour to another or precise boundaries in the pattern of the ornamentation. Another distinctive feature of the enamelware is the naturalistic depiction of birds, flowers and landscapes that can be described as close to the realistic manner of painting. These exquisite objects are true masterpieces of coloured cloisonné (using fine silver partitions) and non-cloisonné enamelling. The exhibits include works by well-known craftsmen – Namikawa Yasuyuki, Namikawa Sosuke, Ando Jubei and Hayashi Kodenji.

The technique of making enamelware was exceptionally expensive, require enormous investments of time and effort. This may explain the fact that when the Meiji era drew to a close the majority of workshops closed down and soon the skills acquired through years of experience became lost. A remarkable collection of Japanese ceramics is represented by celebrated Satsuma vases and incense-burners, the painted decoration of which is remarkable for its exquisite conciseness. The province of Satsuma on the island of Kyushu, which gave its name to a whole class of ceramic ware, became one of the leading centres of Japanese pottery-making from the late sixteenth century. The local products of light-coloured clay covered with a translucent cream glaze with a craquelure network of fine cracks rapidly gained recognition across the whole of Japan as early as the 1600s. For all the variety in methods of decoration, there are obvious common technical, technological and stylistic features in the finishing of “Satsuma ware”. The most noticeable feature of such decoration (representing part of its innovative character) was the use of genre compositions, sometimes elaborately composed multifigure scenes that had previously been extremely rare in the decoration of Japanese earthenware and porcelain. The exhibition features pieces from the Kinkozan, Yabu Meizan and other workshops. The collection of lacquerware, made from precious varieties of wood and decorated in a manner traditional for the Far East, is represented by objects typical for the time in question. There are cabinets with doors inlaid with mother-of-pearl, tortoiseshell and expensive imported materials; caskets embellished with gold lacquer in different shades. The decorative compositions had popular subjects: personages from literature, history or mythology, topographical views and the temples of Japan, motifs in the “flowers and birds” genre. Gold painting in low relief, sometimes executed with a brush literally as fine as a single hair, and inlaid gold spangles are testimony to the labour-intensive and expensive nature of the work. Various methods of finishing lacquerware can be seen in the decoration of a cabinet attributed to the craftsman Shibata Zeshin. It is appropriate to note the difference between Japanese and Russian lacquer. In Russia, as in Europe, lacquer or varnish was always a coating material, applied in a thin layer at the final stage and intended to provide protection against environmental factors for the oil paints on a canvas, for example, or the painted decoration on Palekh boxes. It was never regarded as a material in its own right, possessing its own beauty. Japanese craftsmen, by contrast, took to applying lacquer in multiple coats, “immersing” an image in its depths. As a result, the decoration acquired the optical effect of volume.

The exhibition curators are Anna Vasilyevna Savelyeva, head of the Far East sector, and Maria Lvovna Menshikova, senior researcher in the State Hermitage’s Department of the East. The owner of the collection is Zakhar Davidovich Smushkin. A four-volume scholarly illustrated catalogue has been prepared for the exhibition in both Russian and English. 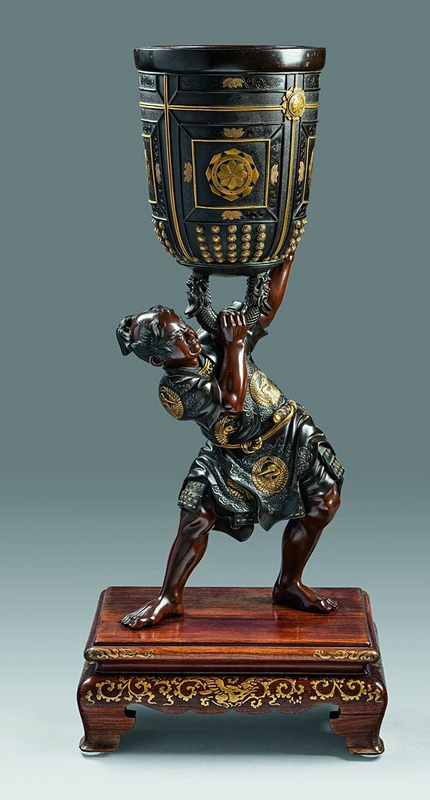 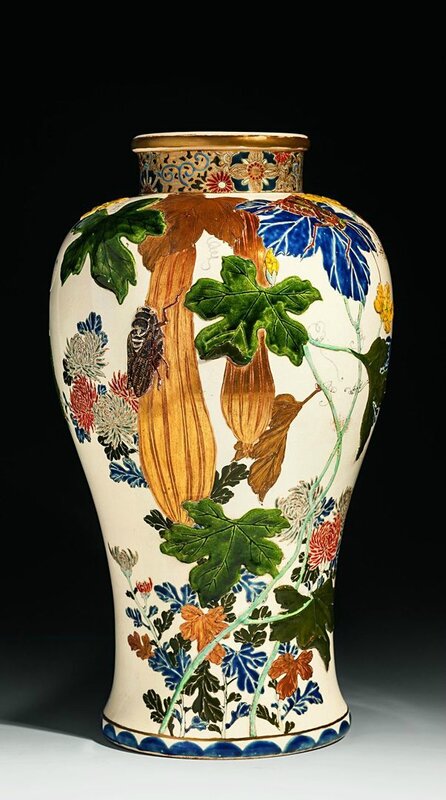 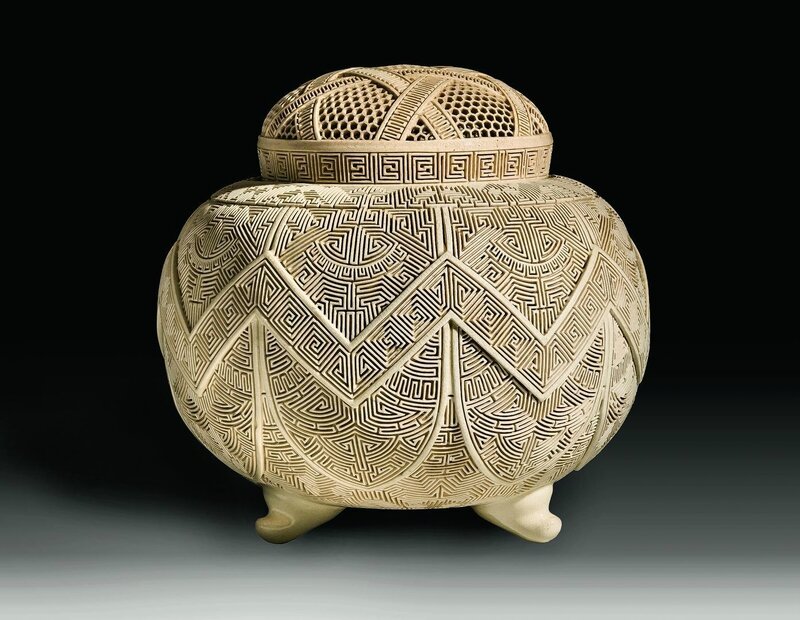 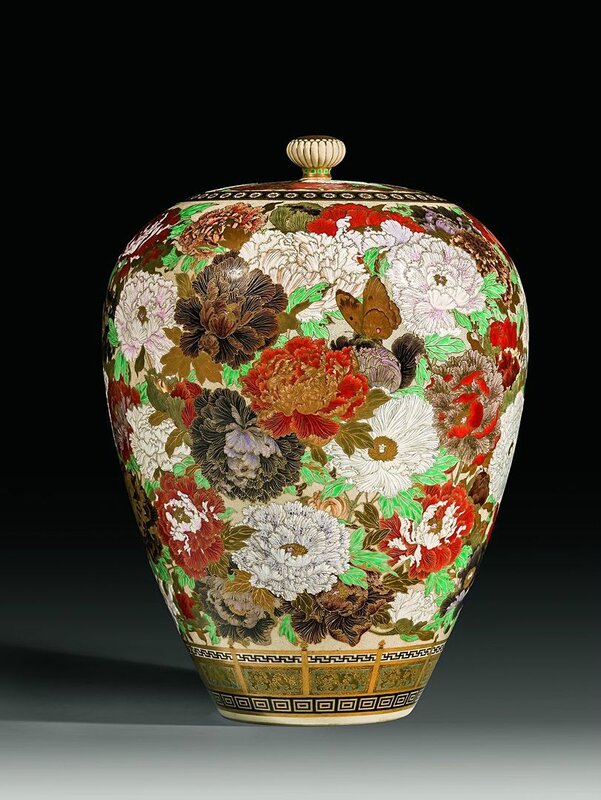 Commentaires sur Perfection in Details. The Art of Japan in the Meiji Period (1868-1912) at the State Hermitage Museum