The heavily potted upright sides rising from a splayed foot with rectangular perforations to either side, covered overall with a thick glaze of pale bluish-green tint, the foot rim painted with a dark brown wash imitating the dark biscuit on celadon wares of the Song dynasty, box .

Notes: Ru glazes have traditionally been much admired by Chinese connoisseurs, and were copied on porcelain as early as the 15th century. Excavations at the imperial kilns at Jingdezhen have revealed that Ru-type glazes were being made for the Ming imperial court. In 1984, a porcelain bowl with inverted rim and Ru-type glaze was excavated from the Xuande stratum at the imperial kilns, illustrated in Imperial Porcelain of the Yongle and Xuande Periods Excavated from the Site of the Ming Imperial Factory at Jingdezhen, Urban Council Hong Kong, 1989, pp. 276-277, no. 97. The imitation of this revered glaze became even more popular at court in the 18th century under the Yongzheng and Qianlong Emperors.

No other bowl of this form appears to be recorded. As most Ru-type wares of the period imitate archaistic forms such as different bronze vases, this form is likely to have been inspired by an ancient prototype. Compare with a Guanyao vase with similar perforated foot ring dating to the Song dynasty (960-1279), illustrated by Weng Wan-go and Yang Boda, The Palace Museum, Peking: Treasures of the Forbidden City, New York, Abrams, 1982, pl. 18. Also see a pair of Yongzheng-marked lavender-blue bottle vases with perforated feet from the Meiyintang Collection, sold at Sotheby's Hong Kong, 7 April 2011, lot 29. 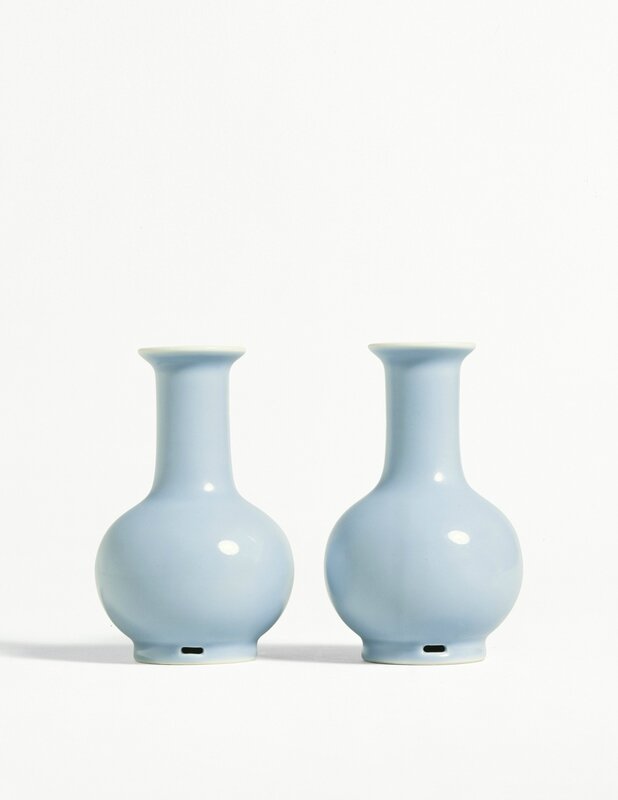 Cf. A fine and extremely rare pair of lavender-blue bottle vases. Marks and period of Yongzheng