A fine and exceedingly rare underglaze blue and copper-red meiping, Qianlong six-character sealmark and of the period (1736-1795

A fine and exceedingly rare underglaze blue and copper-red meiping, Qianlong six-character sealmark and of the period (1736-1795 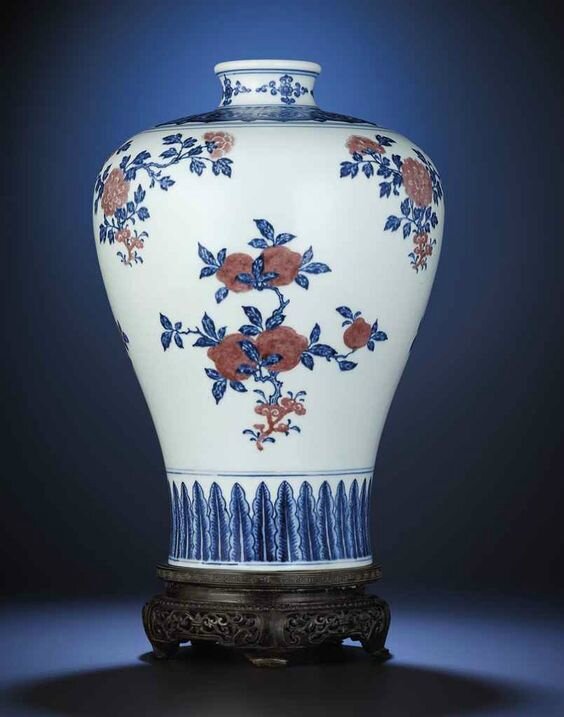 The vase is finely painted with three fruiting branches above lingzhisprigs, the branches and leaves in underglaze blue and further detailed with the persimmons, peaches and pomegranates picked out in underglaze copper-red of raspberry-red tone, below three similarly decorated flowering branches below the shoulder, each of the fruiting and flowering branches rising from a sprig of lingzhi picked out in underglaze copper-red, tapering to the lower body with a band of overlapping plantain, the short waisted neck with four evenly spaced florets above the gently sloping shoulder with a collar of elaborate radiating lappets formed from interlinked stems - 13 in. (33 cm.) high, wood stand, Japanese wood box

Provenance: By repute, given as a gift on the tenth day of the twelfth month in the forty-second year of the Meiji period, corresponding to 1907, by Prince Pulun (1874-1927), the great-great grandson of Emperor Daoguang

This rare and elegant meiping is exceptionally well-potted to produce a strong and balanced outline, while its skilfully painted decoration adeptly combines underglaze cobalt-blue painting with painting in underglaze copper-red. Successful firing of underglaze copper-red requires extremely precise control of the firing process in order to achieve the best colour, and this vase is a credit to the kiln master responsible for its firing, since the red is exactly the desired rich crushed-raspberry colour.

The Chinese court of the 18th century evinced particular admiration for the ceramics of two earlier periods - the Song dynasty and the early Ming dynasty. The imperial kilns were therefore at pains to produce porcelains which recaptured the style of these periods. The decoration on the current vase is closely based upon that seen on meiping of the early 15th century - both in the choice of motifs and the generous spacing of the design, which not only allows each of the motifs to be appreciated as an individual entity, but also draws attention to the pure whiteness of the body material and the clarity of the glaze.

An early 15th century meiping with two well-spaced registers of sprays - in this case both registers have fruiting sprays - can be seen amongst the blue and white vessels from the Ardebil Shrine (illustrated by J.A. Pope, Chinese Porcelains from the Ardebil Shrine, 2nd Edition, London, 1981, pl. 51, no. 29.413). Two more Yongle meiping with two off-set registers of fruiting sprays are preserved in the collection of the Palace Museum, Beijing (illustrated in Blue and White Porcelain with Underglaze Red (I), The Complete Collection of Treasures of the Palace Museum, vol. 34, Hong Kong, 2000, pp. 30-1, nos. 20-30).

These vessels all display the early 15th century fascination with precisely painted fruit and flowers on the branch. In the Yongle reign sprays of fruit on the branch became a very popular decorative theme on both open and vertical forms among the fine quality wares. A distinctive feature of the sprays painted on imperial porcelains of this period was a naturalistic break at the end of the twig - as if each spray had been torn off the branch. This naturalistic approach was a new one on early 15th century blue and white wares, and it is probable that this and the frequent depiction of both flowers and fruit on the same branch, as well as occasionally details of plant roots, were influenced by the woodblock illustrations in materia medica - pharmaceutical literature dealing with plants for their medicinal properties. Although the ends of the twigs are covered by fungus on the current 18th century vase, the same attention to naturalistic detail can be seen in the depiction of the shape and texture of the twigs, and the disposition of the fruit.

A Qianlong meiping of virtually identical shape, size and decoration to the current vase, but with the design executed solely in underglaze blue, rather than blue and red, is in the collection of the Palace Museum, Beijing (Illustrated in Blue and White Porcelain with Underglaze Red (III), The Complete Collection of Treasures of the Palace Museum, vol. 36, Hong Kong, 2000, p. 131, no. 117). A similar underglaze blue decorated meiping was sold at Christie's Hong Kong on 1st December 2010, lot 2970, from the Shorenstein Collection. Another Qianlong meiping, in the Beijing Palace Collection, has very similar decoration to the current vase, but is described in the catalogue as being decorated in underglaze blue and rouge-red overglaze enamel. It is, however, possible that the rouge enamel has been applied over underglaze copper-red, as was sometimes done in the Qianlong reign. This latter meiping is illustrated ibid., p. 253, no. 231. A Qianlong marked meiping decorated in underglaze blue and copper-red was sold by Sotheby's Hong Kong in November 1998. This vase, however, has slightly more crowded decoration and both registers have fruiting sprays without lingzhi fungi. A Yongzheng meiping decorated in underglaze blue and copper red with sprays of san duo is illustrated by Wang Qingzheng in Underglaze Blue and Red - Elegant Decoration on Porcelain of Yuan, Ming and QingHong Kong, 1993, no. 177. It is interesting to note that on this Yongzheng vase there is only a single register of the fruiting sprays, and the lingzhi fungi below them are painted in underglaze blue, rather than the copper-red used on the current Qianlong example. It is also notable that on the Yongzheng vase lychees appear in place of the persimmons depicted on the Qianlong vessels. A Yongzheng meiping with similar underglaze blue and copper-red decoration, depicting peach, pomegranate and lychee, was also sold by Christie's London, 13 November 2001, lot 142.

The fruit which provide the major decoration on the current vase are known in Chinese as san duo, or the 'Three Abundances'. The peaches symbolise an abundance of long life; the pomegranates symbolise an abundance of sons and grandsons; while the persimmons symbolise an abundance of wealth, or more precisely gold. A further auspicious wish has been added to both the fruit sprays and the sprays of flowering branches above them. Below each spray is a pair of lingzhi fungi, reinforcing the wish for long life. The 'Three Abundances' was a very popular theme in the 18th century and appears on a number of porcelain vessels decorated in various techniques. A Qianlong lantern-shaped vase decorated in overglaze enamels and gilding in the collection of the Palace Museum, Beijing has the 'Three Abundances' painted in rectangular panels reserved against a deep blue ground with gold scrolls (illustrated in Porcelains with Cloisonne Enamel Decoration and Famille Rose Decoration, The Complete Collection of Treasures of the Palace Museum, vol. 39, Hong Kong, 1999, p.151, no. 133). However the Beijing Palace Museum also has a Yongzheng flask, which, like the current vase, has the 'Three Abundances' in underglaze blue and copper-red, on which each spray is supported by a lingzhi fungus (illustrated Blue and White Porcelain with Underglaze Red (III), op. cit., p. 218, no. 199.

It is believed that the current magnificent and very rare vase was received as a gift from Prince Pulun (1874-1926), on the tenth day of the twelfth month in the forty-second year of the Japanese Meiji period (corresponding to AD 1907). Prince Pulun was the grandson of Yiwei, the eldest son of the Daoguang emperor, and was an important political figure in the first two decades of the 20th century, at a time of great change for his country. The Prince served as Minister for Agriculture, Industry and Commerce in the 'Imperial Family Cabinet' set up following the death of Empress Dowager Cixi. With Shixu, he represented the Qing at Yuan Shikai's inauguration as Provisional President in March 1912, while on 11 October 1913 at the inauguration of Yuan Shikai as the first formal President of the Republic of China it was Prince Pulun who read the address from the Emperor. He also headed the committee for drawing up a constitution, to be examined and discussed by the National Assembly, although later the Assembly itself was authorised to draft the constitution. Writing in 1911, P. Samuel Reinsch expressed considerable admiration for the prince saying that his dealings with the assembly were: '... indicative not only of quick intelligence but of high and unusual qualities of character. While this statesmanlike conduct may not have earned the Prince official favor, it certainly has gained for his judicial temperament wide admiration in China and elsewhere.' (P. Samuel Reinsch, Intellectual and Political Currents in the Far East, Boston & New York, 1911, p. 253). Significantly, Prince Pulun was the first member of the Chinese Imperial family to undertake extensive travel abroad. He was President of the Imperial Commission to the 1904 World Exposition in St. Louis, in the United States of America, where the Chinese displays included a pavilion that, apparently accurately, recreated part of Prince Pulun's own palace in Beijing. The Prince showed considerable interest in the countries he visited and stated that during his visit to America the thing that most impressed him was 'the universality of the education given both boys and girls' from a young age (reported in a letter of 7 September, 1904 from John Goodnow of the USA Consular Service in Shanghai to Senator A.J. Beveridge in Indianapolis, Indiana). The Prince's travels brought him into contact with diplomats and high-ranking officials from many different nations, and it would be quite possible for him to have presented the current vase as a gift to one of these important persons. The vase was included in three Japanese publications in the 1980s, as noted under 'Literature' in this catalogue. It is interesting to note that in the 1982 publication the vase is illustrated next to a similar vase decorated solely in underglaze blue. Both of these vases were illustrated again in 1989; in this publication, the blue and white meiping is published with its companion pair, and now offered in the present sale as lot 2942. Whatever their palette, these are rare and extremely handsome vases, but the current vessel with its combination of underglaze blue and underglaze copper-red is particularly rare and has been painted and fired with exceptional skill.

Commentaires sur A fine and exceedingly rare underglaze blue and copper-red meiping, Qianlong six-character sealmark and of the period (1736-1795