NEW YORK, NY.- The first retrospective exhibition devoted to the Indian artist Y. G. Srimati (1926–2007) is on view at The Metropolitan Museum of Art. Featuring some 25 meticulously executed watercolor paintings, augmented by musical instruments, archival photographs, and performance recordings, An Artist of Her Time: Y. G. Srimati and the Indian Style demonstrates Srimati’s consistent commitment to her vision of an Indian style. Raised in the heated climate of the independence movement—as a teenager, she performed devotional songs at prayer meetings for Mahatma Gandhi—Srimati explored themes from Indian religious epic literature and rural culture, asserting traditional subject matter as part of a conscious expression of nationalist sentiments. Drawn from The Met and private collections, the exhibition focuses principally on the artist’s first two decades—the 1940s and 1950s—when her repertoire was defined and her style matured. The artist’s key works from the 1980s and 1990s, when she resided in New York, also are on view.

“Experiencing the political struggle leading up to the transition to an independent India had a lasting impact on Srimati’s work,” said John Guy, The Met’s Florence and Herbert Irving Curator for the Arts of South and Southeast Asia in the Department of Asian Art. “She remained committed to painting as a highly personal expression of her fundamental Indian values.” Born in Mysore into a cultured Mandayam Brahmin Tamil family and educated in Madras (present-day Chennai, in South India), Srimati, at a young age, received classical training in the four traditional South Indian arts—voice, music, dance, and painting. She became a highly accomplished vocalist and performer of classical Indian music and kept a lifelong friendship with the preeminent Carnatic vocalist M.S. Subbulakshmi. She also toured in India and the United States, and in the United Kingdom with the influential classical Indian dancer Ram Gopal.

Alongside her performance career, Srimati painted prodigiously and did so throughout her life. Her mastery of watercolors allowed her to build on the aesthetics of the 1930s while reinventing a visual language that was overtly Indian. In this she was strongly influenced by Nandalal Bose, the leading exponent of the “Indian style.” Her paintings were featured in a number of key exhibitions in India in the 1950s and 1960s, including solo exhibitions at the Government Museum in Madras in 1952 and at the All India Fine Arts Society in Delhi in 1955. In 1950 she was profiled in the first major survey publication of painters in post-independence India, Present Day Painters of India (Bombay), alongside such established and rising artists as Jamini Roy, S.H. Raza, K.K. Hebbar, and Amrita Sher Gil.

Among the works on view in the exhibition at The Met, her late work, Maha Kali (1980), recaptures the dramatic power first encountered in her inspired Shiva Gangadhara (Shiva as Bearer of the Ganges) from 1945. Also on view is a suite of paintings from the late 1940s that draw on imagery from the great sixth-century Buddhist murals at Ajanta, exploring figure types that pay homage to the greatest painting legacy of early India. John Guy commented, “Srimati may be seen as crusading this movement of rediscovery, reaffirming the continuing vitality of traditional imagery in modern Indian art.”

The exhibition is curated by John Guy. 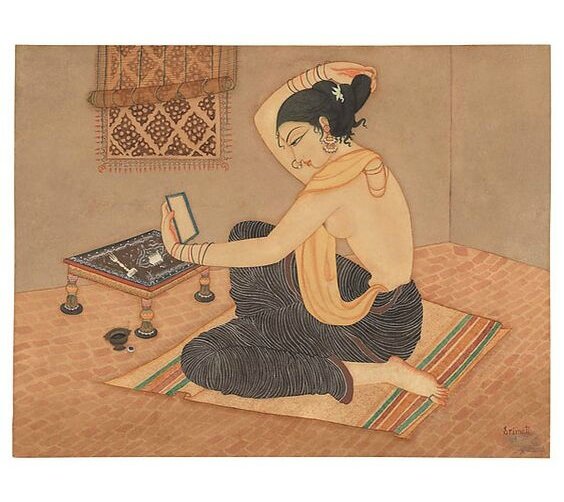