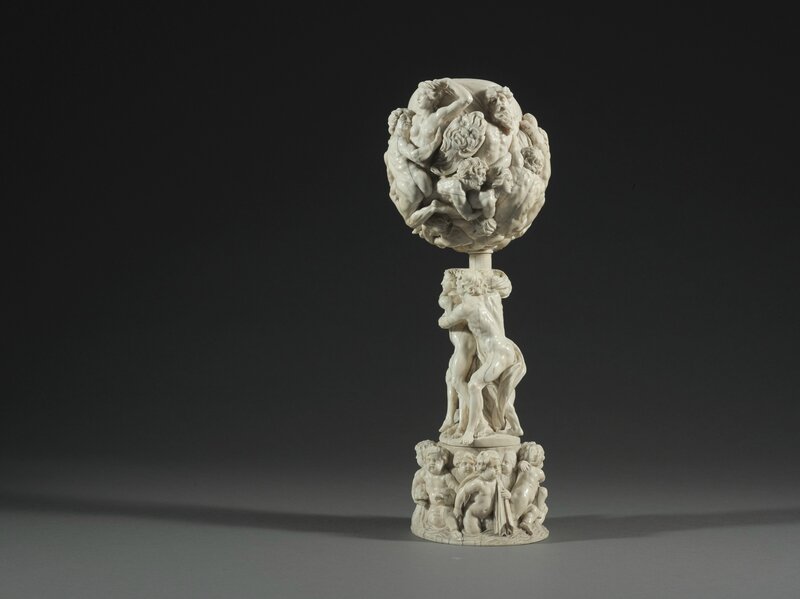 Note: This extraordinary and highly important Nef can be attributed to Georg Pfründt, one of the greatest 17th-century German ivory carvers. With its superb rhythmic play of entwined, expressive, mythological figures, it exhibits all of the hallmarks of Pfründt's virtuoso technique. The ambitious scale and complexity of the Rothschild Nef, together with its exceptional quality, ranks it alongside the finest works attributed to Pfründt, whilst epitomising the Baroque fascination with natural and technical wonders.

This extraordinary and highly important Nef can be attributed to Georg Pfründt, one of the greatest 17th-century German ivory carvers. With its superb rhythmic play of entwined, expressive, mythological figures, it exhibits all of the hallmarks of Pfründt's virtuoso technique. The ambitious scale and complexity of the Rothschild Nef, together with its exceptional quality, ranks it alongside the finest works attributed to Pfründt, whilst epitomising the Baroque fascination with natural and technical wonders.

The Rothschild Nef can be attributed to the 17th-century German ivory carver, wax-modeller, medallist, and engraver, Georg Pfründt, on the basis of a comparison with works attributed to the sculptor and to his circle in the Kunsthistorisches Museum, Vienna, and the Bayerisches Nationalmuseum, Munich. In form, as well as quality, it is particularly close to the Nef with ivory elements attributed to Pfründt in the Kunsthistorisches Museum (inv no. KK 4525) (see Sabine Haag's cataloguing in which she confirms the authorship, op. cit., pp. 88-97). This Nef has a cup with a very similarly conceived and executed ivory cup with writhing figures of bearded men and youthful women, entwined in drapery, and set against the same reeded low-relief background. An accompanying charger with ivory reliefs also attributed to Pfründt (inv. no. KK 4459; see Haag., op. cit., pp. 88-97) shows similarly conceived representations of women, with broad faces with hair centrally parted and tied behind the head. These features concurrently recall figures by Pfründt's master Leonhard Kern, such as his Three Graces in the Württembergisches Landesmuseum, Stuttgart (inv. no. 1981-5); the bearded men in the present Nef likewise reference works by Kern, such as the Chronos sold in these rooms on 5 July 2016, lot 108. These classicising features are seen again in Pfründt's Ceres in Vienna (inv. no. KK 45040), with similar heavy drapery, with multiple folds. For the bearded male figures with prominent musculature and thick locks of hair, see the Raubgruppe published by Theuerkauff, again in Vienna (1974, op. cit., p. 85, fig. 40). Further comparison can be made to works associated with Pfründt in the Bayerisches Nationalmuseum, including a tankard drum from his circle with Poseidon and Amphitrite (inv. no. R 4752). The Rothschild Nef, one of Pründt's most ambitious commissions, represents an important addition to his oeuvre.

Georg Pfründt was born in Franconia and trained in the workshop of the great ivory carver Leonhard Kern (1588-1662). He later studied to be an engineer under Johann Caspar von Stadion (1556-1641), and eventually worked for Bernhard, Herzog von Saxe-Weimar. Pfründt moved to Strasbourg in 1639, and he went on to work in Paris with the French sculptor and medallist Jean Warin (1604-1672). Returning to Germany circa 1646-1649, Pfründt collaborated with Georg Schweigger and Christoph Ritter III (1610-1676) on a triumphal arch for Leopold I in Nuremberg, and eventually worked in the service of Charles Ludwig, Elector Palatine (reg 1649-1680) from 1659, and, later, for Duke Eberhard VIII of Württemberg (reg 1628-1674) in Stuttgart. He died in Durlach, near Karlsruhe, in 1663.

The present Nef would have been intended for a princely or noble kunstkammer, in which it would have been celebrated as both a natural wonder and a triumph of human industry. The 17th-century kunstkammer (or art chamber) developed out of the medieval treasury and, in turn, the Renaissance studiolo. The term is first recorded in 1550 in relation to the Holy Roman Emperor Ferdinand I (1503-1564) and his collection of precious objects and curiosities. In 1565, the Flemish writer Samuel von Quiccheberg differentiated between the kunstkammer, an art chamber, and the wunderkammer, a place of natural wonders (mirabilia). Over the course of the ensuing decades the two were conflated and the kunstkammer became a cabinet of natural and artificial wonders, from fine bronzes and paintings to uncarved gems and animal specimens. Kunstkammern were a source of social and intellectual prestige, with two of the finest belonging to the Emperor Ferdinand II (1578-1637) at Schloss Ambras and the Emperor Rudolf II (1552-1612) at Prague Castle. In the 17th century there came about a particular vogue for superbly worked objet d'arts in amber, rhinoceros horn, and, particularly, elephant and marine ivory; the present Nef would have been conceived precisely to appeal to this taste.