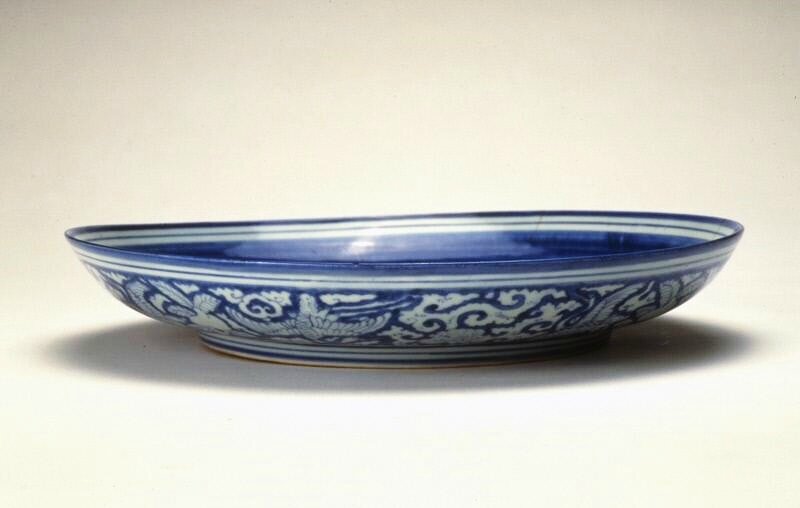 The decorative elements on this blue-and-white plate form a complex rebus for "mountain of longevity, sea of blessings (shoushan fuhai)" Directly above the mountain, which rises from the waves is the Chinese character for longevity. The mountain sprouts fungi of immortality (lingzhi), which reach for the clouds. Other longevity symbols, such as cranes (he) and peaches (tao), fill the sky. These decorations are typical of those on objects from the reign of the Jiajing emperor, who was an ardent Taoist.

Although the phoenix is the king of birds, the crane (1, 2) symbolizes both high status and longevity. Its appearance on the badge of an official's robe signaled that the wearer was a civil servant of the first rank. A crane flying in the sky represents a wish for a rise in status. The crane together with the pine tree conveys a powerful emblem for longevity. Pairs of cranes express wishes for a bride and groom to live a long life together, so they are frequently used as a decoration on marriage gifts. When the crane (he ?), is pictured with the deer (lu ?), their names form a rebus meaning the universe or longevity. The crane also represents wisdom, and when at rest, the bird is thought to be contemplating. Traditionally, a figure of the bird is placed on a coffin during a funeral because the crane allegedly provides a vehicle for the deceased to travel to heaven.

HIDDEN MEANING: "May your blessings be as deep as the eastern sea, and may you live to be as old as the southern mountain" (furu donghai, shoubi nanshan)!