ROME.- The Galleria Borghese in Rome presents "The Origin of Still Life in Italy. Caravaggio and the Master of Hartford, an exhibition aimed at enhancing the museum's artistic heritage. The origins of Italian still life in the context of Rome at the end of the sixteenth century are analysed following the subsequent developments of Caravaggesque painting during the first three decades of the seventeenth century. The exhibition is curated by art historian and director of the Galleria Borghese Anna Coliva and by art historian and critic David Dotti, specialist in Italian baroque and particularly the themes of landscape painting and still life. In recent years, the Galleria Borghese has pursued a program of exhibitions varying in topic and approach, but all centred on the identity and perfect intense historical significance of its building and collections. The Galleria Borghese is not only a location but also the crucial protagonist and leitmotif of each exhibition. Today's inauguration is a purely philological and historiographic occasion in the course of the Galleria's activities, narrating the origins of a painting genre that only much later would be called "Still Life". In fact seventeenth-century art criticism referred to these paintings as "oggetti di fermo" (still objects) with the precise modern meaning of "motionless models", corresponding to the Anglo-Saxon locution still life.

The exhibition aims to take stock of the progress of contemporary critical studies, with the specialist essays in the catalogue which examine extremely complex philological issues concerning the origins, autography and affiliation with stylistic groups of artists. Unfortunately their identity is unknown to us due to the absence of documentary sources, but from a stylistic point of view they are sufficiently well- known for critics to have grouped them under very impressive name-pieces: firstly the Master of Hartford, the main subject of the exhibition, as his production of still lifes is closely linked to certain works of Caravaggio, such as Self portrait as Bacchus (Bacco malato), the Boy with a Basket of Fruit, the Lute Player and the Supper at Emmaus commissioned by Mattei. Furthermore, for a long time Federico Zeri had identified the Master of Hartford with the young Caravaggio. In order to attest the influence that the Master of Hartford and early Caravaggio had on painters in Rome during the first two decades of the seventeenth century, the exhibition displays works of the Master of the Vessel, the Master of the Rose Apple, the Pensionante dei Saraceni (Christ Among the Doctors), and other important well-known artists.

The exhibition also includes the painters who attended the Academy established by the Marquis Giovanni Battista Crescenzi in his Palazzo at the Rotonda near the Pantheon: Pietro Paolo Bonzi the so-called Gobbo dei Carracci, the Master of the Acquavella Still Life – who critics are inclined to identify as Bartolomeo Cavarozzi - and the same Crescenzi, to whom specialists attribute certain works including Fruit and Vegetables on Wooden and Stone Shelves from the Galleria Estense in Modena.

Caravaggio was the first to confer the same formal and interpretative dignity to natural elements portrayed from life with dazzling realism hitherto only used for figures, sacred history and mythology. As evidenced by the presence in the exhibition of Basket of Fruit (Canestra) from the Pinacoteca Ambrosiana, the Lombard painter was the first to affirm still life as an important subject in itself, full of symbolic significance that has nothing to do with "The pointless microscopies of the Flemish painters, " (Roberto Longhi). Basket of Fruit is the first work of art that simultaneously imposes a pictorial representation of things to the eye and conscience in the most convincing forms. It also brings about the reality of the object in painting, affirming the reality of the artist and the truth of the act of painting. Thus it can be affirmed that Basket of Fruit actually inaugurated the magnificent advent of modern art. Prior to this the numerous still lifes, which certainly abounded throughout art history from its very origins, were nothing more than a parenthesis within vaster compositions, hierarchically subordinated to broader issues of representation: entirely "incidental" factors, intended merely to demonstrate the technical expertise and lenticular ability of an artist able to create perfect imitations of real life. The paintings which herald the extraordinary conceptual leap so perfectly and completely realized in Basket of Fruit of the Pinacoteca Ambrosiana, and that gave rise to what we define as a new and autonomous pictorial genre, have all been present in the Borghese collection since its formation in the early seventeenth century, thanks to Cardinal Scipione Borghese's passion for collecting works of art. Emblematic are the two works by Caravaggio: Self Portrait as Bacchus (Bacco malato) and The Boy with a Basket of Fruit along with four still lifes identified by critics under the conventional name Master of Hartford. There can be no doubt that an exhibition such as this must necessarily take place in Villa Borghese, because the vicissitudes of its birth and affirmation are intertwined with the history and protagonists of the site. Caravaggio, Three pots of flowers, squirrel and parrot on board. Private collection.

This exhibition marks the first time these six works have been united once again after four hundred years. All six of them had been part of one hundred and five paintings seized on May 4, 1607 by a papal tax collector from Cavalier d'Arpino - the most famous and sought-after artist of his time, but who was also a great art impresario, merchant, perhaps collector - upon orders of Pope Paul V Borghese, the uncle of Cardinal Scipione Borghese, creator of the Villa and collection. The paintings were immediately donated by the Pope to his nephew to further enhance the formation and development of his already celebrated Galleria.

The very origin of the paintings seized from Cavalier d'Arpino is a philological discovery that we owe to Federico Zeri, who suggested that because of both the incidence of light as a synthetic composition factor, with its "sharp representation of the most minute details", and the strength and optical evidence of the objects represented, these four still lifes by the Master of Hartford embody the first pictorial evidence of an immature young Caravaggio still working in the studio of the older Cavalier d'Arpino. 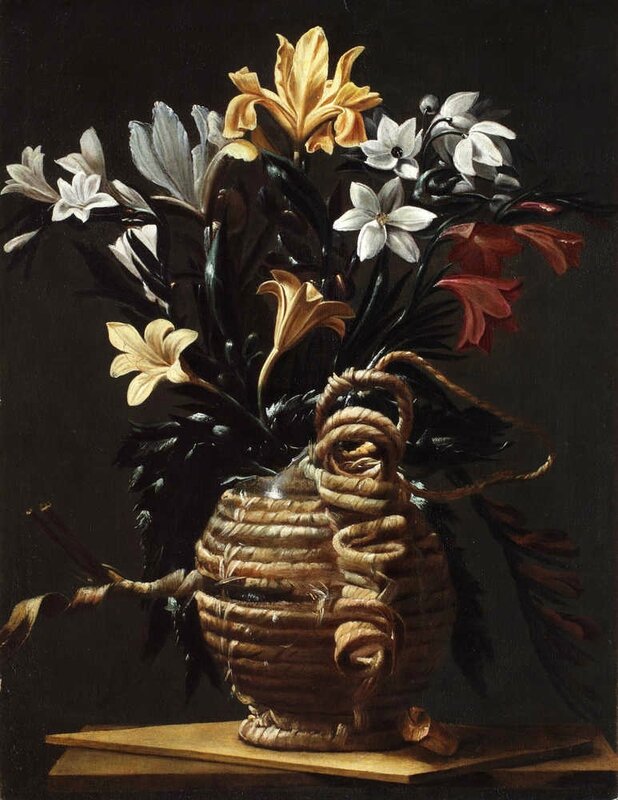 Master of the flask of Forlì, Flask spagliata with flowers, Rome, private collection. 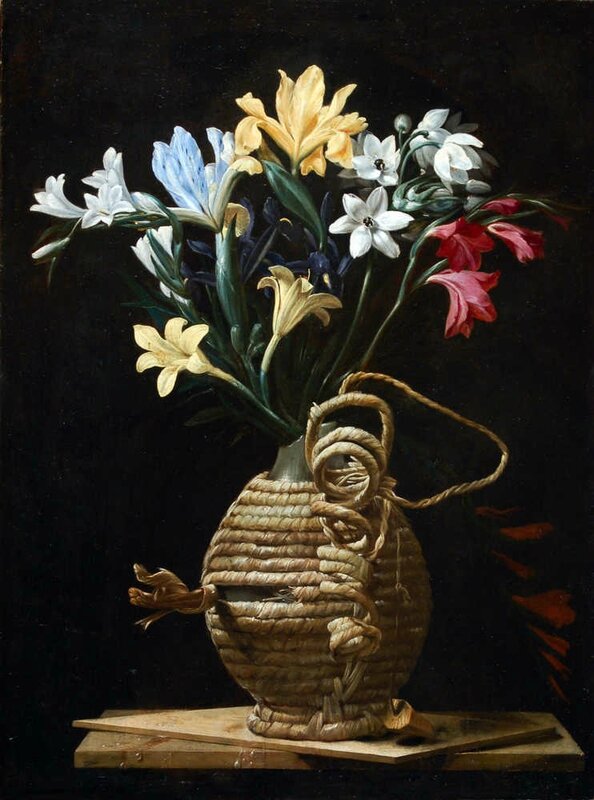 Master of Hartford, Flowerpot, elevation with figs, grapes and basket with fruit on the table. Private collection.

We owe to Roberto Longhi the most appropriate words that distinguish what happened before and after. Before were the grandiose fervid elaborations of the new still life theme; "The pointless microscopies of the Flemish painters, an extreme degeneration of the lenticular accuracy of the great, but perilous Nordic fifteenth century, which ended up degenerating into painstaking tasks typical of nuns and Carthusian monks". And after? "Mario dei Fiori was to paint festoons of plants on the mirrors of Roman princes. The 'still life' simply expired and was buried along with the spirit of Caravaggio. And as to the composite hotchpotch between 'Baroque' and the old Nordic sedulity, it is better to remain silent."