'Holy Night: The Christmas Story and Its Imagery' on view in Frankfurt

'Holy Night: The Christmas Story and Its Imagery' on view in Frankfurt FRANKFURT.- The Liebieghaus Skulpturensammlung illuminates one of the most well-known stories of Christian culture: the Christmas story. Until 29 January 2017, the comprehensive special exhibition “Holy Night. The Christmas Story and Its Imagery” devotes itself to the manifold events and multifaceted legends revolving around “Christmas Eve” with a focus on their depiction in sculpture, painting, printmaking and other media. It presents altogether some 100 precious objects from more than forty collections in many countries, for example the Metropolitan Museum of Art in New York, the Kunsthistorisches Museum in Vienna, the Paris Louvre or the Vatican Museums.

The temporal emphasis is on the art of the Middle Ages – which has been supplemented, however, by selected Early Christian testimonies and a number of Baroque objects in an impressive demonstration of the surprising diversity of pictorial themes related to the Christmas story. In addition to well-known motifs such as the Annunciation, the Adoration of the Shepherds and the Adoration of the Magi, many stories and images that have meanwhile all but fallen into oblivion await the visitor: episodes such as Joseph’s Doubt and the Circumcision or the miracles on the flight into Egypt. And finally, the Liebieghaus has succeeded in obtaining two large multi-figural – and highly significant – crib ensembles from Naples and Tyrol for presentation in the show.

The aim of this major special exhibition is to provide an experience of the Christmas story in its full thematic scope and contribute to a new understanding of the works’ imagery. The show offers an entertaining, suspenseful, and often surprising look at medieval art – and a story well worth rediscovering.

The exhibition at the Liebieghaus Skulpturensammlung opens up the entire narrative spectrum of the Christmas story in ten sections, proceeding chronologically from the Annunciation to the Return of the Holy Family from Egypt. Everyone knows how the Biblical Christmas story begins in the Gospel of Luke: “And it came to pass in those days, that there went out a decree from Caesar Augustus that all the world should be taxed.” In our consciousness, the text from Luke has become interwoven with motifs from the Gospel according to Matthew in a tale that recounts the events revolving around the birth of Jesus Christ, the son of the Christian god. Yet the Christmas story not only tells of how the divine son comes to the world in the flesh, but also of his adoration by simple shepherds and wise men – later called kings –, of danger, flight and even murder, and finally of a happy return home. Actually, however, the Gospels provide only a minimum of basic information and sketchy allusions, and nothing in the way of vivid narrative details or stringent narrative logic. Already back in ancient Christian times, this circumstance led to writings that – rich in detail and imagery – enhanced and expanded on the sparse information supplied by Luke and Matthew. Above all the so-called Apocrypha (from the ancient Greek apokryphos: hidden, dark), texts not recognized as valid by the official Church, were especially widespread. These many writings enriched the Biblical accounts and endowed them with life because they characterized the Biblical protagonists and described the anecdotes and wondrous episodes with a wealth of motifs. Gaps in the Christmas story were thus filled in, and Biblical occurrences and figures concretized in keeping with the need of the faithful for additional information and explanations of the events. This further development of the narrative was reflected throughout the range of pictorial production in Christian art, for example in devotional paintings, altarpieces, manuscript illuminations and stained-glass windows. The pictorial depictions in turn stimulated the believers’ imaginations and emotions and intensified their devotional practice. Prominent objects in the show convey the considerable degree to which the sparsely detailed Biblical accounts were already supplemented – in terms of motif and narrative details alike –in Early Christian times and over the course of the Middle Ages. Medieval people, for example, were soon no longer satisfied with the meagre information the Bible gave them about the wise men from the Orient who follow a star that signifies to them that a new king of the Jews has been born. Over time, the three wise magicians became the kings Caspar, Melchior and Balthasar we are familiar with today. Not only in the written tales, but also in the visual arts, the journey of these kings took on ever more detail and ever greater splendour, and interest in the dimensions and accoutrements of their entourage grew substantially. A large panel painting from Klosterneuburg presumably executed in Vienna around 1490 impressively demonstrates this development. Another example is the flight of the Holy Family from Bethlehem to Egypt. The majority of depictions of this episode are content to concentrate on the core motifs and show Mary and the Christ Child on the donkey accompanied by Joseph. One of the qualitatively most superb artworks of this kind comes from the Dom- und Diözesanmuseum in Trier: a masterful Late Gothic limewood carving that originally belonged to the Welschnonnenkirche (Church of the French Nuns) there. Quite early on, however, wondrous incidents evolved to enhance the story of the Flight into Egypt – lavishly, as compared to the brief Biblical account. Several of these episodes came to enjoy great popularity in pictorial depiction. According to apocryphal accounts, many miracles occur on the journey: from the Miracle of the Wheatfield, thanks to which the Holy Family is able to shake off their pursuers, and the Taming of the Dragons to the Miracles of the Date-Palm and the Spring, with which Jesus helps the family to fruit and water, and the Shattering of the Idols in the Egyptian city of Sotinen when the Child arrives. Depictions of the Miracle of the Date-Palm are the most numerous: a small limewood relief in the Wiener Kunstkammer, for instance, recalls this legendary episode, as does a large-scale woodcut by Lucas Cranach (1472–1553) dated 1509. Cribs are unrivalled in their ability to illustrate the Christmas-related events of salvation, thanks to their freely arrangeable figures that developed over the course of the sixteenth century into the forms we are well familiar with today. On public display in the churches of the parishes and religious orders, these ensembles – often vast in size and integrated in entire landscapes – were extremely popular. Soon the nobility discovered the crib as a prestigious religious collector’s item. Finally, in the latter part of the eighteenth century – that is, in the context of the Enlightenment – they were banned (temporarily) from churches in our part of the world and made their way into the households of the bourgeoisie, where their nineteenth and twentieth-century success story began. Two large-scale multi-figural crib ensembles from Naples and Tyrol will bring the exhibition to a striking atmospheric close. Altarpiece of the Virgin with Nativity in shrine cabinet, insides of wings: Adoration / Visitation / Presentation in the Temple, painting from the circle of the Altenberg Altarpiece, Middle Rhine, ca. 1350. Courtesy Liebieghaus Skulpturensammlung. Altarpiece of the Virgin with Nativity in shrine cabinet, outsides of wings: Adoration / Coronation of the Virgin, painting from the circle of the Altenberg Altarpiece, Middle Rhine, ca. 1350. Courtesy Liebieghaus Skulpturensammlung. 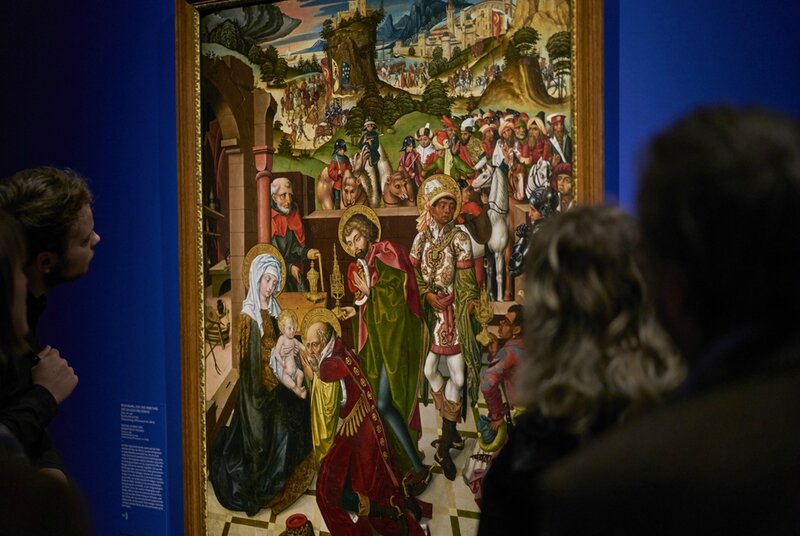 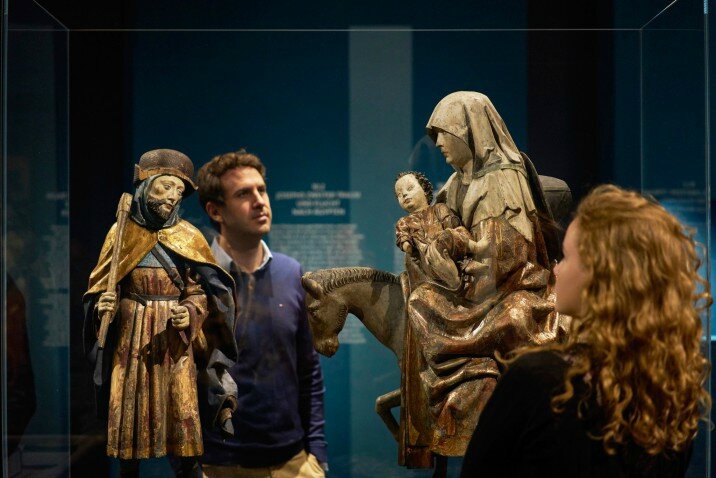 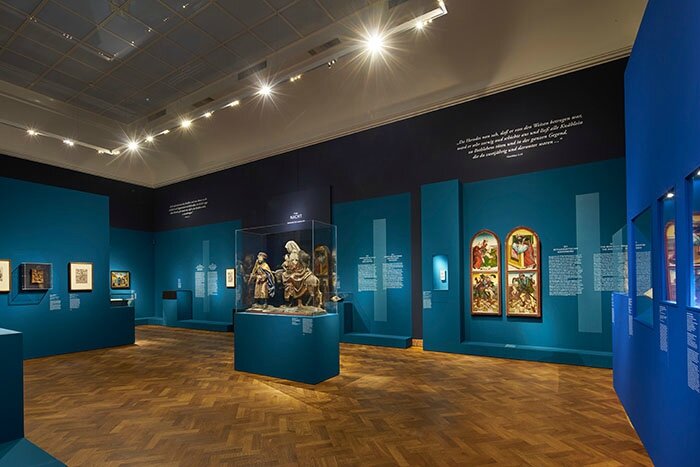 Commentaires sur 'Holy Night: The Christmas Story and Its Imagery' on view in Frankfurt