Plate with blue glaze, Ming dynasty, Jiajing six-character mark within double-circles and of the period (1522-1566)

Plate with blue glaze, Ming dynasty, Jiajing six-character mark within double-circles and of the period (1522-1566) 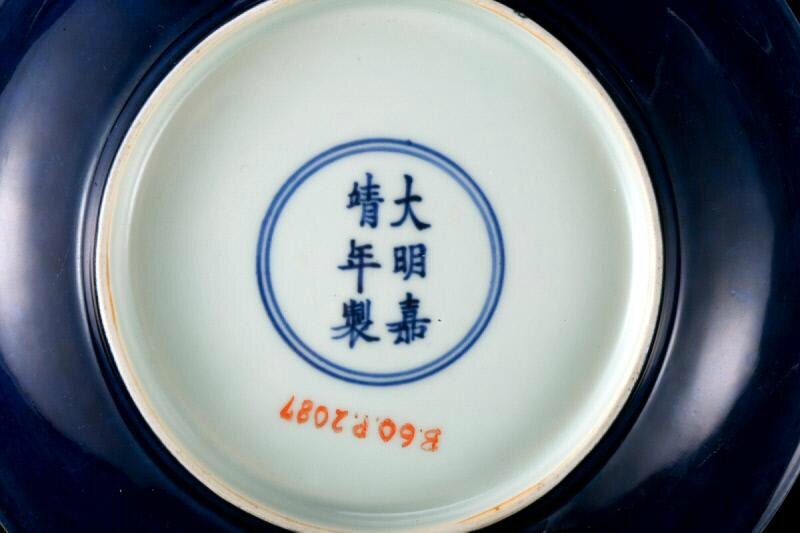 A group of tablewares from the Avery Brundage collection illustrates four types of monochrome glazes produced in the Ming imperial factories in Jingdezhen from the early fifteenth through the sixteenth centuries. The Yongle emperor chose the color white and Islamic metalwork– inspired forms to be used at altars and imperial temples. The fifteenth-century white glaze, soupy and smooth, is known as "sweet white."

The dark blue glaze, favored by earlier Mongol rulers, was successfully reproduced during the Xuande period. Blue was often used in ritual celebrations on sacrificial altars. Eloquent names, such as "gemstone blue" and "celestial blue," were documented. Yellow, viewed as a noble color, became fashionable in the late fifteenth century. This low-fire glaze could cover a previously fired white glaze for refiring, or coat a clay body for only one firing. The yellow wares presented to the Chenghua and Zhengde courts exhibit a delicate body and refined texture with sensitive color tone, winning the admirable description "chicken fat."

The brown glaze resulted from an experiment in the Xuande reign, when official porcelain manufacturers attempted to re-create the brown glaze of a type of ancient Ding ware that had once been presented to the Northern Song court. On Ming imperial porcelain, brown glaze that glimmered on the surface with a shiny metallic luster was called "purple gold," after the description for brown Song Ding ware. Matte brown glaze was referred to as "soybean paste."