LONDON.- Organised in partnership with the National Trust, this display explores the history of the garniture; a set of ornamental vases unified by their design and a specific context. Complete sets of garnitures are exceptionally rare. A status symbol between the 17th and 19th centuries, garnitures later fell out of fashion. Sets were damaged or broken up and individual pieces sold off; few complete sets now exist, and even fewer survive in their original settings. This display brings together garnitures loaned from 13 different National Trust houses. These are complimented by objects from the V&A’s collection as well as two private loans to present an overview of this overlooked ceramic phenomenon. Highlights include a set reconstructed especially for the display, a garniture made in miniature for a dolls house, an extremely rare seventeenth-century silver set of jars, a striking Rococo set and Wedgwood ceramics.

Garnitures are usually made up of an odd number of vessels and arranged symmetrically. Displayed on top of furniture, on the mantelpiece, or over doorways, garnitures enhanced the interior and expressed the wealth and taste of their owners. Early in the 17th century, the first sets were assembled from imported Chinese porcelain. Later, complete sets with matching decoration were made for the European market in both China and Japan. As the fashion spread around Europe, British and European potters made their own versions. The display recreates for the first time, an early type of garniture made up of pairs of jars, bottles and beakers from different collections. This reconstruction, based on seventeenth-century engravings, is assembled from Chinese porcelain vessels of about 1640, from historic houses Ickworth, Suffolk and Scotney Castle, Kent, as well as pieces from the V&A’s own collection. The show also includes a five-piece garniture, also of Chinese porcelain and dating to about 1685-95, which was rescued from Clandon Park following a fire which significantly damaged the property in April 2015. Also on display is a rare collection of Chinese porcelain painted in iron-red enamels, usually on display at Petworth House and previously belonging to Charles Seymour, 6th Duke of Somerset (1662 – 1748), known as ‘The Proud Duke’.

When imports of Chinese porcelain were interrupted, porcelain forms were imitated in Dutch, French and Japanese ceramics and in English silver. The display includes a five-piece silver garniture made in London between 1670 – 80, an elaborately decorated five-piece set of Japanese porcelain (1700- 20) and a tin-glazed earthenware three-piece set manufactured in Delft, The Netherlands (about 1695). This particular set was bought new for Kingston Lacy in Dorset in 1698 and has never before left the house. Once the secret of porcelain was mastered in Europe in the early 18th century, many local factories produced their own versions of garnitures. In the hands of Josiah Wedgwood and his partner Tomas Bentley, garnitures took a new direction influenced by the shapes of ancient Greek vases recently discovered at Herculaneum and Pompeii. In 1769 Wedgwood described the public’s insatiable appetite for vases as a ‘violent Vase Madness’ and by 1775 he made over 500 shapes available. The display includes a garniture of four covered urns and three vases in black stoneware decorated in imitation of antique red-figure vase painting, manufactured in Wedgwood’s factory. Reiono Liefkes, Senior Curator of Ceramics at the V&A, said: “It is stunning to see these pieces from all over the country together here for the first time. Many have been cleaned and restored especially for the show, and you can see them close up, in all their glory.” Patricia F. Ferguson, the National Trust's External Adviser on Ceramics, said: "This display promises to change the way you see historic vases; they were almost always designed to be part of a set".

To coincide with the exhibition, V&A publishing and the National Trust have published the richly illustrated catalogue Garnitures: Vase Sets from National Trust Houses by Patricia F. Ferguson. The book explores exceptional examples of surviving garnitures and traces their history. It reveals an early use of the term in relation to Chinese porcelain on display in the palace of Versailles under Louis XIV, whose son the Grand Dauphin had over 100 vessels arranged over a bedroom fireplace. Extraordinary massed displays placed on shelves with mirrors behind them were also created by Mary II in her palaces in the Netherlands and England, and are documented in engravings from the period. 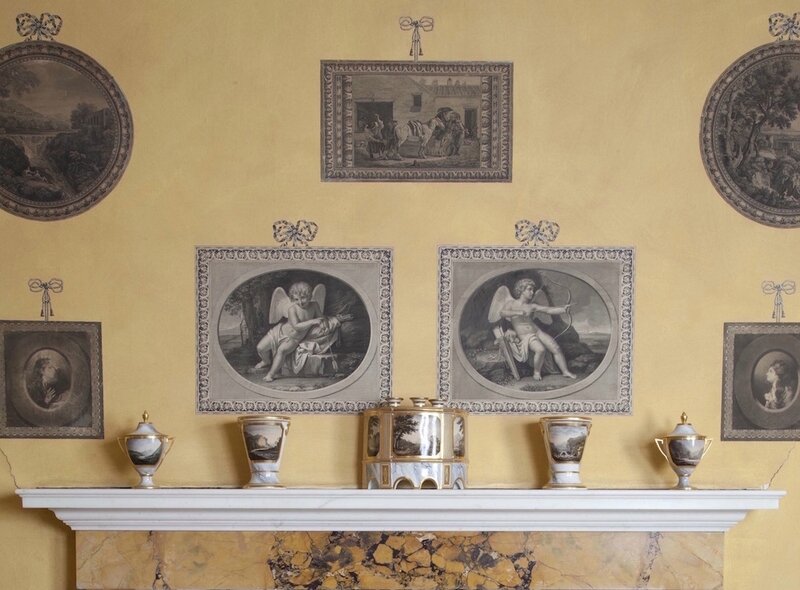