ROME.- A journey through the art of the first half of the 17th century in the footsteps of a great and true woman. A first-class painter with a lively effervescent mind, who did not limit herself to sublime painting techniques, but who could modulate it according to the demands of her different patrons, transform it after having absorbed the best from her contemporaries, as she did from the ancient masters, sculptors and painters. The personal and professional trajectory of Artemisia Gentileschi (1593-1653) enthrals the public also because she is seen as the forerunner of the affirmation of female talent, equipped as she was with a unique combination of strength of character and willpower. Her talent allowed her at a very young age, when she arrived in Florence from Rome, to be the first of her gender to be admitted to the Florentine Accademia delle Arti e del Disegno. And so, already an adult, she learned to read and write, to play the lute and to frequent the world of culture in its broadest sense. This strength of character permitted her to overcome domestic violence and financial difficulties. The passionate letters she wrote to her lover Francesco Maria Maringhi, a sophisticated nobleman and loving and faithful life-long companion, reveal her free spirit. Her temperament was such that even under torture (which she was subjected to during the lawsuit her father brought against Agostino Tassi for raping her) she said: “This is the ring you give me, and these the promises”, so mocking with sarcasm the empty promise of a shotgun wedding. The exhibition is on view at the Museo di Roma in Palazzo Braschi, under the auspices of the Italian Ministry of Cultural Heritage, Activities and Tourism, promoted and produced by Roma Capitale, Department of Cultural Growth – Rome Superintendency of Cultural Heritage and Arthemisia Group and organized with Zètema Progetto Cultura. It covers the entire professional life-span of Artemisia Gentileschi, allowing visitors to follow the life and work of the artist parallel to that of her colleagues.

There are approximately 100 works on show, brought here from all over the world, from prestigious private collections and from some of the most important museums, in a direct comparison between the artist and the painters she frequented in Rome, then Florence, then back to Rome before going to Naples, with the brief Venetian interlude that should be further investigated, as also the brief but intense period in London. The initial idea for the exhibition, which will run until 7 May 2017, came from Nicola Spinosa who has also curated the Neapolitan section, while Francesca Baldassari is responsible for the Florentine section, and Judith Mann has curated the Roman section. The catalogue accompanying the exhibition, published by Skira, gives an account of personal and professional events in Artemisia’s life and contains descriptions of the works on show, benefiting from the most up-to-date technical studies and the latest documents to have been found. In addition to the magnificent masterpieces by Artemisia such as Judith Beheading Holofernes from the Museo di Capodimonte, Esther and Ahasuerus from the Metropolitan Museum of Art, and Self-Portrait as a Lute Player from the Wadsworth Atheneum, Hartford Connecticut, visitors will have an opportunity to see Cristofano Allori’s Judith from the Galleria Palatina, Palazzo Pitti, Florence and Simon Vouet’s Lucretia from the Národní Galerie, Prague. The paintings executed in her early years in the studio of her father Orazio are followed by those produced during her time in Florence, influenced by the work of painters she met at the court of Cosimo de’ Medici such as Cristofano Allori and Francesco Furini, but also Giovanni Martinelli; others seem to stand testimony to her friendship with Galileo and time spent in his company, as well as to her interest in the emerging world of opera.

Following a chronological itinerary, works by Artemisia are shown alongside those of artists working in Rome in the same period such as Guido Cagnacci, Simon Vouet, and Giovanni Baglione, providing sources of inspiration that led Gentileschi to update her versatile style from time to time. The exhibition concludes with the paintings from the Neapolitan period, in which comparison gives us an understanding of her professional rapport with her Neapolitan colleagues, from Jusepe de Ribera and Francesco Guarino to Massimo Stanzione, Onofrio Palumbo and Bernardo Cavallino. Canvases such as the splendid Annunciation (1630) – also on show in the exhibition – illustrate this fertile cross-pollination, exchange and comparison. Sponsor of the exhibition Generali Italia, technical sponsor Trenitalia. The event is recommended by Sky Arte HD. 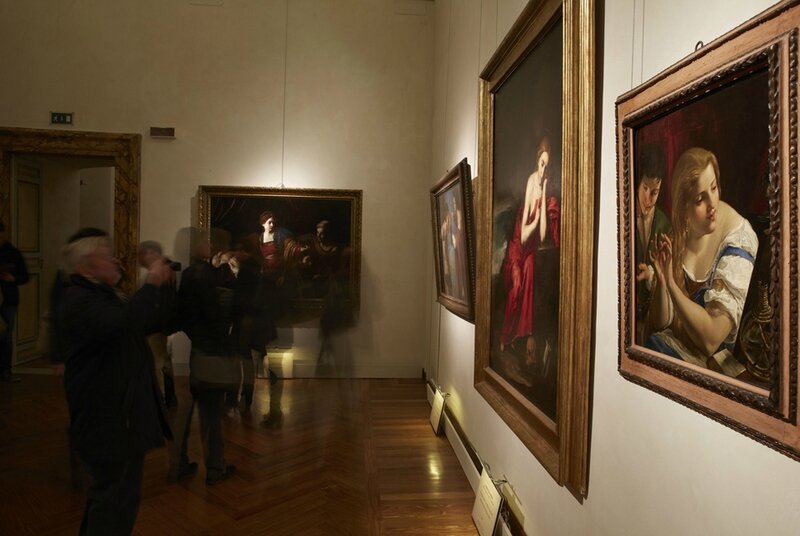